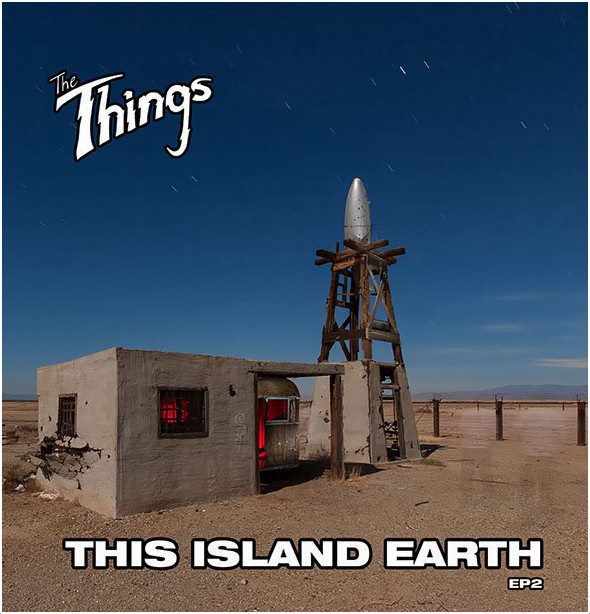 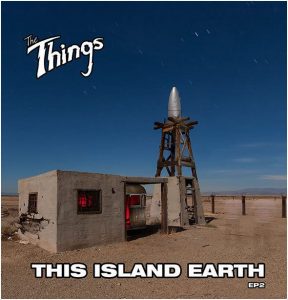 The Manchester ‘Nuggets’ style psych band featuring John Maher release their second EP,  This Island Earth. Ged Babey is pleased to find that it’s out of this world.

A footnote in the history of the Manchester music scene?  Not anymore. They are writing a whole new page with this release…. Once, ahead of the times. Now, old enough to know better.  The Things are back, and this a cool EP,… here’s the history;

The Things were formed in 1979 inspired by the sounds of 60s psychedelia and Garage bands such as The Seeds. Playing regularly to packed crowds in Manchester at venues like The Band On The Wall , The Russell Club and The Beach Club, and later supporting Buzzcocks and New Order on UK tours. The Things recorded a session of 4 tracks for Mark Radcliffe’s Transmission show on Piccadilly Radio, broadcast on 12 July 1980. A single, “Pieces Of You” was released in October 1980. They disbanded early in 1982.

When the Things reformed in 2012 they planned to make the album they should’ve made in 1980.  With help from former-Buzzcock and Things drummer John Maher, who re-activated his Imperial label, they recorded 13 tracks in 2015.

Four of them became EP 1  which I reviewed here, and now here are another four slices of classy, vintage-sounding Manc Psych rock’n’roll.

The title track will make you think of the Inspiral Carpets and even the Stranglers, on first listen, due to that combination of garage guitar and swelling organ….  yet after a few plays it just sounds like the Things!  Here is a try before you buy link.

A spritely little number I’m sure you’ll agree. And some intriguing lyrics; ” The clocks are going backwards, your words don’t even rhyme. You speak another language, that no-one’s ever heard…”

The rest of the EP is just as good.

‘Hypnotised’ is a fantastic echo-heavy groover with fabulous organ swirls and a lyric about the hypnotic effect of a groovy ‘chick’ on the mind of the narrator.

‘Pleasures’ is another cracker in true Garage Punk tradition concerning ‘Pleasures of the Mind’ with some beautifully crafted lyrics and wandering guitar and ‘fairground’ organ. Maher on drums gives it a solid foundation on which the band build.

‘If You’re There’ is the piece de resistance; a longer, slower epic with a guitar solo which sounds like Hank Marvin in Space (on Acid) bumping into Neil Young … if you know what I mean. Which you probably don’t, but it’s a great song. Trust me.

If you are a fan of the Prisoners – in a way their London contemporaries-, or the whole Seeds, Standells, Nuggets era 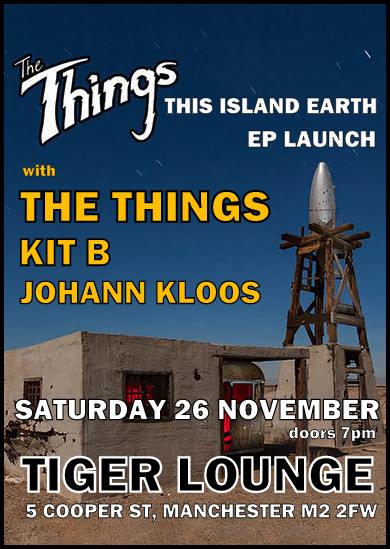 bands, or have an interest in the lost history of Manchesters bands then I’d urge you ro check out the Things.  They are alive and kicking and as good as ever, the impetuousness of youth being replaced by the wisdom of their years (Then again…)

The launch gig for the EP is Saturday 26th November at the Tiger Lounge. Tell them I sent you.

CD available at the Launch gig on Saturday 26th November at the Tiger Lounge, Mcr M2 or via Facebook.

(John Maher will not be playing at the launch gig incidentally as his lives on a remote Scottish island where he pursues his other two passions, photography and VW’s. He will, I’m sure, be there in spirit.)