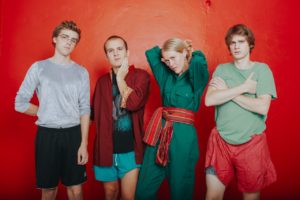 Keith Goldhanger provides us with a few of his highlights from the world of new music from February 2019.

After the hustle and bustle of January (a month in which music lovers cram into small spaces to watch what we’re told are the bands to look out for as the year progresses) February arrives, the heating goes off, the sunglasses are on, we’re wearing short trousers and the list of new discoveries continues to grow.

Before these get mentioned it’s worth documenting some of the discoveries from years and weeks gone by that have re-appeared this month: Anna Calvi’s show at the Roundhouse may be one of the best shows at least one of us have witnessed for years; The Murder Capital from Ireland are as great as we expected; Surfbort are still great; The Specials new album is stunning; and some of us saw Idles play for over an hour longer than we’ve seen them play before.

Some of us are delighted to hear that the debut album from London based band Crows is approaching. Chain Of Being is a tune and a half that gets the head nodding and feet tapping. If this is an indication of the forthcoming album then you’ll hear more about them as summer approaches.

Canadian band Pup have their third album out in a few months time and will be visiting the UK with copies for sale on their merchandise table. They’ve been here before and impressed. This is a cracking example of what to expect:

Pom Poko (top pic by Jørgen Nordby ) have their debut album available now, and to launch it they arrived one Friday night this month and packed out East London’s Shacklewell Arms to confirm the reports we’d been receiving in regards to the greatness of this four piece band from Norway. A free show for those happy to try something new and a superb band we need to see and hear even more from. This band are fabulous and will be back in the UK later this year. Go and see them.

Sneaking into the month’s new bands list and thrown to the the top of the pile is an act that may appear again more than once before the end of the year. They’re called Scalping. By the time March has ended, there’ll be more to say about this lot from Bristol (ticket already in wallet). Watch this space.

Finally (and thanks to my friend Mr Pudding) this came my way. This chap called Tyron is from Northampton and even though some of us ignored most of the BBC’s sound of 2019 list a couple of months ago it can only be assumed that this punk rock grime foot-tapping tune hadn’t reached a pair of East London ears at the time such lists were being compiled. This is proper Punk Rock Shouty Grime that fans of Sleaford Mods may enjoy. It goes by the name of  Slowthai and is so good it makes you wonder why we’ve not heard stuff like this before now.

Time for a lie down before grabbing our big coats again and shiver our way through the month of March.