Home Music Bands Things we didn’t know about a month ago: February 2017

Keith Goldhanger rounds up a short month in London that produced more new tunes by more new bands and re-acquainted himself with some stars of the past.

February made us shiver, bad news on the doorstep and all that nonsense about music dying, lost Valentine cards and a list of new tunes that time doesn’t allow us to give as much attention as we’d like to.

We’re already cheering along to everything IDLES  (main pic) seem to throw our way. This month we got another tune by the name of Mother. Next month we may get an album but for the time being this is what’s been played more than once at home before we launch ourselves onto London’s rickety transport network as we head towards some additional light entertainment before bedtime.

South London band BULLETPROOF BOMB kicked the month off with a good start. Last summer’s Sportswear Punk comes highly recommended if you fancy hearing a gang of Jamie T’s consuming the scraps from the back catalogue of late ’80’s’s baggy heroes Flowered Up. They’re going to be busy this year, they may turn up in your local venue and if they do then you’ll need to see these in action.

HUNCK are going from strength to strength

And ARROWS OF LOVE are still tugging at our sleeves reminding us that ‘Beast’ is now a couple of months old and that at least one of us needs to get a grip and keep up with what’s happening.

Keeping up of course is near damn impossible now-a-days if everything has to get listened to. We keep going out to see our favourites in the flesh (and usually for free) so we haven’t got a lot of time to sit on our bums listening to new releases.

BABE gave us a new tune, came to East London and opened the doors to whoever fancied popping in to have a look and listen.

and GULP were in the West End playing a free gig on Valentines day minus one person who should have gone but was still wiping away the tears caused by the doormat remaining bereft of envelopes due to the postman giving the house a wide berth that day.

At least one of us therefore had a night in to give the new FLAMING LIPS album a listen as some sort of consolation to having not been able to afford the entry fee to their recent show in Brixton (and of course, not having anyone to share that poppadom with).

The misery continued as the thumbs were right down on that for an hour as well as the new ARCADE FIRE tune that comes second when paired up with a similar sounding SWEAT tune we’ve had in our collection for over six months and then just as the day was about to end, our favourites THE RHYTHM METHOD saved the day by keeping up with the high quality pop music they’ve made already by giving us what surely is going to be a huge favourite throughout 2017 with Cruel.

TOMZACK impressed as they entertained those of us waiting to see our favourites AK/DK at The Shacklewell Arms (Free gig). This duo also provided a very decent tune and video to stare at and cherish.

Albums by ELBOW and CLOCK OPERA are still being trawled through. GALLOPS, who were mentioned in January have given us another track, that will surely be included on their next long player but one or two of us have been getting a little excited about the forthcoming BLANCK MASS album that’s about to drop in March which may mean amending the title of this piece if we aim to continue a little honesty in the proceedings. 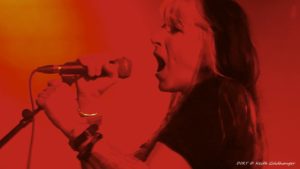 also gave us reason to think twice about all this ‘didn’t know about a month ago’ nonsense however its safe to say that a month ago at least one of us around here didn’t realise how ace these bands were still going to be nearly thirty years after they disappeared into the wilderness.

Alongside THE PUKES and the wonderfully named DOGSHITE who we don’t think have a history as long as the rest of the bill (Rubella Ballet, Omega Tribe …loads of others who we didn’t see). The four day festival ended as a huge and dignified tribute to The Poison Girls Vi Subversa whose songs were heard during the day and a fitting reminder that it’s almost a year to the day since we lost her.

Finally, as much as we enjoy skipping and waving our arms in the air to the new London Grammar tune filling up our hard drives (hands up who thinks it sounds like it’s been lifted from U2’s Joshua Tree album?) how brilliant does this still sound today…?

Will we still be reminiscing about the day we saw Blossoms in three decades time? We’ll get back to you on that in in 2047.