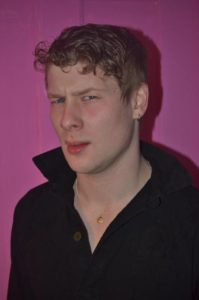 Keith Goldhanger shares one or two new tunes made by people we may or may not know too much about at the moment. This month, familiar faces reappear unexpectedly, bands appear that were meant to be seen a year or three back, and a bloke from Stoke turns up.

We’re on the home stretch now.

More than half way through the year and mental notes are already being taken in regards to the end of the year lists we all love making and reading.

Describing the month of August as average would be too misleading. AVERAGE SEX turned up in support of their new tune Melodie/Sociopath and then reminded us how wonderful their tune at the end of last year Ice Cream was. Watching the band perform this live this month was more than an average highlight.

The highlight of August 2018 however has to be this tune from Stoke based AVERAGE JOE (main pic). He’s also got a couple of interesting tunes kicking around from three or four years ago that are well worth investigating assuming there’s not another Average Joe that looks like a young shaven head version of the one we know on this video (with a much younger but similar looking dog).

Cross My Heart tugs at the heart strings, includes a tiny bit of appropriate swearing and gets better the more you hear it. It has been a regular listened to tune this month that will surely be up there with the ‘best of..’ once December arrives and those previously mentioned lists are being compiled.

This fills the gap nicely in between The Rhythm Method, Sleaford Mods, Arctic Monkeys and The Streets. Not exactly a debut, but a tune (and video) that people who base their lives around first impressions may struggle with (see also The Rhythm Method).

Once you realise this is going to carry on for a bit the song blossoms into a wonderful soulful, passionate, love song that very soon one imagines may make grown men and women cry. The only negative thing one can say about this after numerous listens is the fade out after six minutes.

We hope to meet this man one day, and look forward to hearing anything else he’s been working on recently. This is a tune that’s been heard (RadioX Xposure – apologies this doesn’t mentioned more often)  on a daily basis this month and it’s felt we may have something special to look forward to from this artist. Put the kettle on, sit back and dip your biscuit into your tea along to this.

The second best thing we’ve crossed paths with this month is the by THE BIG & THE FAT. Hearing this and falling for it instantly and then realising we were only two nights away from having the chance to witnessing this in the flesh meant we had to top up our oyster cards and nip into East London’s Old Blue Last to wonder why something this ace was going to be performed so early. Familiar faces mounted the stage that night and thanks to the magic of Google Images and a fast connection we managed to put two and two together before the first note was hit and learn that these are the same folk we previously knew as Eighteen Nightmares at the Lux. Without the hat being worn by the tall bloke underneath it we may not have have started to discuss where we’d seen these people before.
(We recognised a hat before four peoples faces. Some of us are rubbish aren’t we ?)

Eighteen Nightmares at the Lux have reinvented themselves as The Big and the Fat in the most glorious, laid back, arse swaying way and are now ready for the world to come and visit. Simple drums that mimic that of a machine, a driving bass you’ll find yourself dancing along to, simple, not overused guitars and whispered sexy vocals have us going back to look for our dancing shoes that have been left in the cupboard for the past few weeks.

Reading Festival left us with heaps of questions we doubt we’ll ever have any patience to hang around and learn the answers to. Such as how Mosh pits can be created to a soundtrack of not very exciting beats such as what we saw in front of Krept + Konan Sunday afternoon. An hour in which some of us turned into our fathers, tutting very loudly and noticing a huge age gap between ourselves and those that would not have been born the day Kurt Kobain got wheeled onto the same stage or when John Peel would stand there reading out the days football results on a Saturday afternoon. People all around us knew the words, when the tune would stop, when the tune would abruptly start again, some people covered their faces with scarves and formed mosh pits, and some people really lost their shit to this whilst one lonely man stood with his hood up soaking wet and already looking forward to having a nice warm bath once he got home.
But this wasn’t Black Flag.
This was far too soppy, polite and non threatening to go with the sort of behaviour we saw in the crowd.

SPORTS TEAM  helped us forget how utterly soaked and bored we’d been whilst splashing around and watching some of the unknown to us but very popular bands earlier in the day that we caught bits of during the bank holiday Sunday.  Playing just after The Vaccines and just before The Courteeners on The Main stage this performance around the corner on the BBC Introducing stage was worth the day out on it’s own. This is Sports Team (again) …(2:24 Top left hand corner. 3:05 middle).

And then there was that POSA tune … More next month

More writing by Keith on Louder Than War can be found at his author’s archive. You can also find Keith on Facebook and Twitter (@HIDEOUSWHEELINV). You may subscribe to the Goldhanger Shorts Facebook page or browse some of his photos too if you so wish