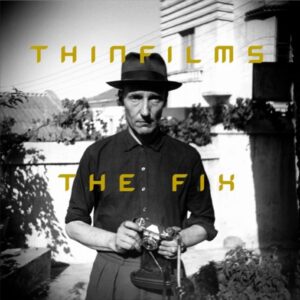 The wonderfully prolific Thin Films has dropped yet another track just before this tumultuous and downright miserable 2016 ends. Yet again channelling the soundtrack work of John Murphy and Clint Mansell, but now completely coming into his own, Thin Films’ latest track The Fix is a reworking of a piece of music that he has been batting around with since 2014. Aided and abetted by ex LIEN bandmate Tien Ren of Southampton’s Superdrone, Ren brings distorted guitar noise to The Fix that at first feels like a departure for Thin Films. But on second and third listens, it soon becomes apparent that it just fits perfectly into Thin Films oeuvre.

The track starts in a very atmospheric, brooding way that feels very industrial. Along with the tribal drumming accompaniment, this could be early Test Dept. and has definite Throbbing Gristle overtones. The eerie gentle sounds are suddenly punctuated by the blasts of distorted, corrosive noise guitar courtesy of Ren and you are immediately reminded of John Carpenter’s recent ‘Lost Themes’ output.

The track ebbs and flows and comes to its natural organic end. And once again, you are left feeling that Thin Films (along with Tien Ren) has sonically transported you to another place that not only conjures up sounds, but more importantly, conjures up visuals and feelings. It’s beautiful stuff. Oh, and this track has recently been picked up by a music publisher. Finally Thin Films is getting the recognition he deserves.