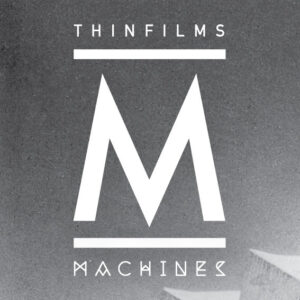 Dan McRae aka THIN FILMS debuted his first album ‘Eskimo’ nearly 11 years ago. Since then he has worked in the film industry on feature films such as The Dark Knight, Gravity and Harry Potter. His influences range from Brian Eno, Ulrich Schnauss, Orbital, Tyco and Boards Of Canada among others.

I’ve been in touch with THIN FILMS for about a year now and he has been drip feeding me his blissed out, cinematic, electronica every couple of months and not one of them has been a dud. Finally, this January has seen him release his second album that collects nearly all the tracks that he’s released over the last year, plus more.

Opening with the title track you are met with a driving beat that has nice squelchy analog synth and some gorgeously haunting interludes. The track concludes with a nice noisy crescendo.

‘Electric Kool-Aid Acid Test’ has arpeggio type electronica that draw you in hypnotically. Strings are introduced that give the track a ‘Bond’ soundtrack feel. Its very cinematic in its scope. ‘Antlers’ introduces the Hammer Dulcimer instrument and is actually a really danceable tune! The beat is throbbing and is one of the standout tracks on this LP.

The fantastically named ‘Snowfall on Brutalist Architecture’ provides a short and gentle interlude to proceedings. ‘Mantis’ follows and this again is a standout track. Haunting choral orchestration accompanying rhythmic beats create an atmospheric effect not a million miles away from Brian Eno’s ambient work.

As the album progresses you have more use of the beautiful Hammer Dulcimer on the chilled out ‘Komorebi – Sunlight Through Trees’ and final track ‘Summertime’ is a sublime piano led track that meanders and takes one on such a perfect end to a sumptuous album.

This ten track album by THIN FILMS is gorgeously chilled out and equally dramatic and big in scope. His influence from the film industry shows and is illustrated perfectly across the ten tracks. If you want an electronica album to dance your tits off to then this one isn’t for you. It works as background music, but don’t get me wrong, this is no way Musak! It’s synth driven gorgeousness that puts THIN FILMS firmly in the same cinematic scope camps as the aforementioned Boards of Canada or Godspeed You! Black Emperor and the sound tracking brilliance of Clint Mansell or John Carpenter. And as the track titles and imagery shows, this is the perfect soundtrack to the dystopian slash Ballardian nightmare that we are currently living in.

The future looks pretty bright for THIN FILMS as the fantastic track ‘NASA’s Crewed Mission To Mars By 2030’ has already been picked up by music publisher Red And Bear Music Group among two other tracks that didn’t make the album. If you are into beautifully crafted electronica that could soundtrack your favourite ‘unmade as of yet’ sci-fi film, then file THIN FILMS as essential. Now.

You can buy and download the album now and/or buy the vinyl release through the Bandcamp link.