Home Music Bands They Might Be Giants: Why? – album review 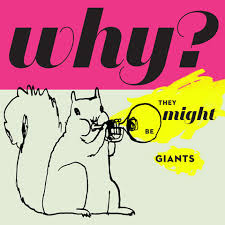 Brooklyn’s quirky duo They Might Be Giants return with their second album in one year. Louder Than War’s Craig Chaligne reviews.

It seems that the relaunch of the bands’ “Dial-a-song” service brought a new burst of creativity that further enhanced the constant high quality of their recent albums. “Dial-a-song” was a service offered by the band between 1985 and 2008 where you could ring a number and an answer-phone would play you unreleased songs by the band and snippets of work in progress demos. The band relaunched the service this year and has been using the strongest entries on their last two records. Since founding their own label at the turn of the millennium, the band have been producing a remarkably consistent body of work whether it’s on their children based albums or their more rock orientated releases. “Why?” their latest release falls in the first category but fear not adult listeners, this will definitely warrant other listening opportunities than using it as soothing music for the kids that are fighting at the back of the car. Opener “Oh You Did” features John Flansburgh’s wife Robin Goldwasser on vocals, best describe as playful nursery rhyme, it’s a song that charts all the mistakes and a disasters kids generate and their reluctance to listen to advice, she also features on another song entitled “Long White Beard”. As usual with the band all songs subscribe to the motto of “concision and melody”, none of them go over the 3 minute mark and even the more experimental remain eminently listenable. Far from shying from serious subjects, the two John’s tackle mono-parental families in a playful but delicate way such as on “And Mom and Kid”. The excellent “Walking My Cat Named Dog” with its subtle electric piano touches engraves itself in your subconscious as does the slice of sunshine pop that is “Elephants” that displays a very McCartney-esque bass line.  The band was signed to Disney’s record label in the mid 2000’s and “Hello Mrs Wheelyke” proves that they have fully assimilated what made the songs of great Disney films memorable.  The more oddball entries such as “Thinking Machine” or “I haven’t Seen You in Forever” show a band still willing to experiment and proving that humour is a great part of their songs but they also sees to have the ability to churn out at will catchy pop ditties, “Omnicorn” being the most obvious example on Why?  To sum it all up another great album by They Might Be Giants.