Home Blogs These Are the Bad Times People – The Presidents of the United... 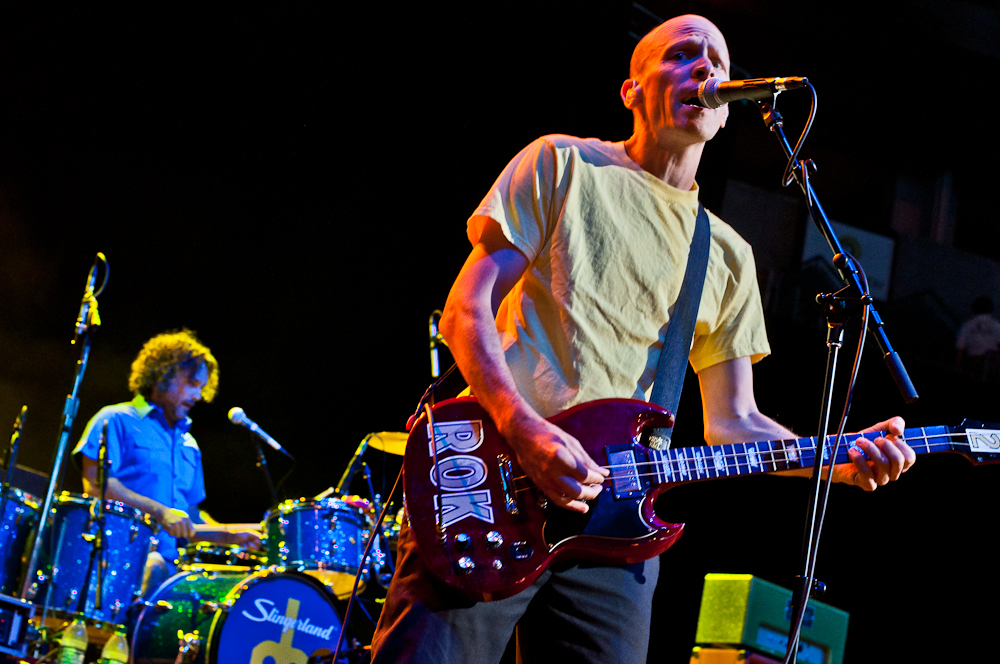 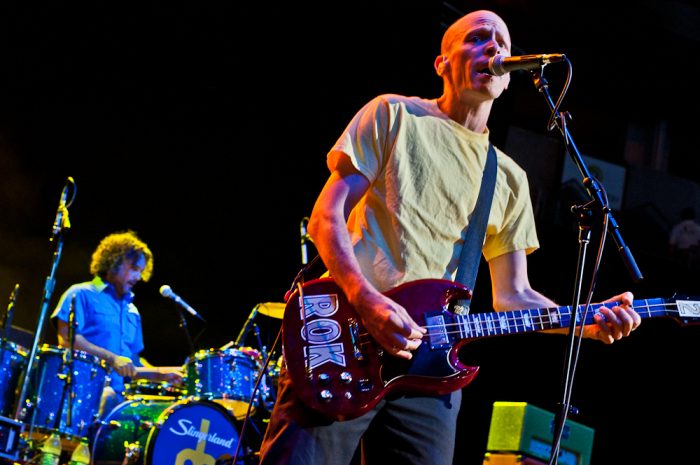 It feels strangely apposite that when one president is elected, another departs; and yet we’re not talking about Barack Obama. One week on from Donald Trump’s tumultuous appointment as the next leader of the free world, one of rock’s most regal of bands, The Presidents of the United States of America, have deemed it the right time to abdicate their area as one of music’s most merry combos.

Although they have previously split before, this time it feels the final nail in their tattered US flag, and although they may only be momentarily mourned, the trio, namely led by the bald badinage of Chris Ballew, had a unique knack for blending classically realist ruminations, often about animals, food and other suburban shticks, with pummelling punky fuzz. Not only was their songwriting refreshingly real and individual, so was their approach to their instruments – Ballew fashioned the basitar, while Dave Dederer – and his replacement Andrew McKeag – got to grips with the guitbass. With a combination of only five strings onstage, Ballew and his counterpart were able to create songs that were murky but magnificent, with a low, deep-throated thrum funnelled through various channels of drop D distortion.

On the outside looking in, PUSA were perhaps a comedic sideshow amid the guitar-based music that dominated the ’90s; however, beneath their Harlequin existence was a more serious side. One of their most famous songs was ‘Lump’, an unashamedly infectious stop-start rocker that was actually about a prolonged sickness Ballew endured, causing him to hallucinate. “Lump was limp and lonely and needed a shove / Lump slipped on a kiss and tumbled into love,” he shouted over a propulsive basitar groove, the kind of lines that many people felt, and continue to feel, in their mid-twenties malaise. Their other staple, the chiming grooves of ‘Peaches’, saw Ballew took some childhood heartache and turn it into a song that was bittersweet but brilliant, a regular feature throughout their back catalogue.

Their other hits showed that the trio managed to take the everyday and turn it into something noteworthy – a disobedient feline became the titular character of ‘Kitty’, a pummeling rocker that swapped its low brunt for typically goofy cat impressions. ‘Dune Buggy’ and its woozy motifs had the sinking feeling of summer wheels being lost in the sand, while ‘Feather Pluck’n’ and ‘Candy’ were propelled by downbeat, low strums that evolved into ascending, arms-aloft choruses that sailed on the right side of silly.

In truth, their sophomore album, II, feels and sounds slightly rushed, the sound of a band trying to keep afloat of a sound that was never going to be bouyant. However, in hindsight there are still some excellent songs on it – the urgent thrash of ‘Supermodel’ and ‘Lunatic to Love’ had newfound fervency and the ability to hoodwink the listener, while ‘Bug City’ was one of their finest records, led by a typically crunchy segue into a deep baritone from Ballew. Their cover of The Buggles’ ‘Video Killed the Radio Star’ also felt oddly fitting; could any other band have covered a song that mixed frivolity with ferocity? And do it so well? It surely didn’t do them any harm.

The Presidents of the United States of America were open to change, too, not least on the highly underrated pomp of 2008’s These Are The Good Times People. Their hitherto three-piece sound was fleshed out, and didn’t just entail Ballew adding a couple of extra strings; ‘Sharpen Up Those Fangs’ was lifted by a lilting acoustic guitar and strident horns, while ‘More Bad Times’ gave Ballew’s wistful wit a bed of aching melodies. ‘Ghosts Are Everywhere’ and ‘Ladybug’, both built on Ballew’s bone-shattering basitar lines and McKeag’s zippy guitar riffs, also showed that their second term in the office was far from spent; indeed, 2014’s Kudos To You! was raw and rip-roaring, from the sighing Casper tragicomedy of ‘Crappy Ghost’ to the blistering punk rock of ‘Stay With Me’. In fact, listening to that record now suggests a band in fine, feral form, and certainly not one that was about to split cos they were, to paraphrase, “old guys now.”

PUSA’s shelf life was always going to be brief; it was built on comedy licks, a novelty-style approach to instruments and a string of zeitgeist-era hits. But dig below this and you find songs as clever as ‘Jennifer’s Jacket’ and ‘Shreds of Boa’, as rollicking as ‘Cleveland Rocks’ and as heartfelt as ‘Some Postman’. They may not have been the most popular of presidents, but they were certainly one of the most enjoyable; let’s enjoy Obama while he lasts.

PUSA are on Facebook. Chris Ballew is currently prepping his other project, Caspar Babypants.