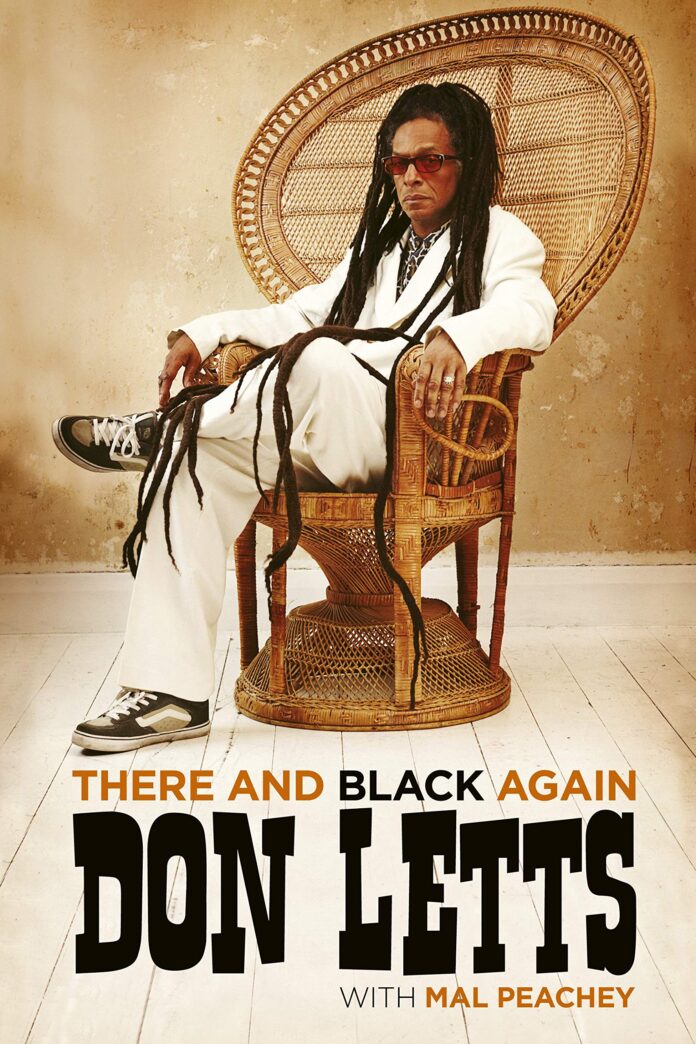 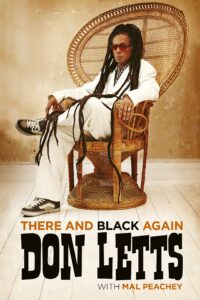 There And Black Again

Don Letts and Mal Peachey document a life at the vanguard of contemporary culture in There And Black Again. This fascinating biopic features a characterful cast, moving from Brixton in the 1960s through fashion, reggae and punk rock in an ever-growing cultural landscape to the present day. Bryony Hegarty reviews for Louder Than War.

The striking characteristic Don Letts conveys throughout his autobiography with Mal Peachey, There And Black Again, is unfaltering certainty. The driving force, at the heart of his journey is self-determination. He gives a direct account of sometimes challenging but often triumphant experiences.

Recollections of family life in 1960s Brixton offer a compelling insight into the ambitions of his Windrush Generation parents. Their sacrifices and expectations are confounded by what British society offers or rather, fails to offer, to the young Don and his peers. Obsessed with The Beatles and role playing scenes from cowboy films, the irony of being defined as ‘other’ is not lost on him at an early age. Sadly, it’s needless to say that as a first-generation British born Black man, he experiences prejudice from individuals, authorities, cultural movements and the establishment.

Letts’ responses reveal a man ahead of these attitudes and actions; intercepting what comes his way. He sabotages exam papers at grammar school and moves out of the family home before his parents can evict him for disappointing them. Letts shows no sense of indignation at the circumstances, or that anything is going to hold him back. His father’s record collection and mother’s self-belief prove to be lasting influences.

He is consistently the right man in the right place at the right time. Whether its running Acme clothing boutique in the 1970s on London’s Kings Road, a stone’s throw away from Vivienne Westwood and Malcolm McLaren’s shop SEX or Djing reggae at the Roxy in between punk acts, he is on the scene as events happen. Sound intuition continues as he goes onto manage The Slits and found Big Audio Dynamite alongside former Clash guitarist Mick Jones: he lives it all.

Don Letts work as a music videographer and film maker is the prevailing expression of his creativity and methodology. Not only has he clocked up over 300 music videos internationally but also made many films. Titles include Dancehall Queen and Grammy-winning The Clash: Westway To The World. An early account in the narrative of introducing Bob Marley and entourage to Polaroids, is perhaps a hint of what’s ahead. There are references throughout to the punk DIY ethic; this is central to his experimental Super 8 documentation at the Roxy which became The Punk Rock Movie. Moreover, from the outset he proves to have a personal magnetism, doubtless integral to his success. Many significant players on the scene happily feel the gaze of his camera.

As indicated in the title there is an exasperation at labelling and stereotyping which goes very much against Don’s philosophy. As he puts it “the juxtaposition of Black and white cultures side by side makes things more interesting for me”. Experiencing the rise of punk first hand, he remarks “I was fired up by what the punks were doing but I wasn’t going to become one. Their argument and problems with Babylon were only partly the same as mine – they could choose to look like outsiders”. Interestingly, a conversation about punk with Bob Marley precedes to the recording of ‘Punky Reggae Party’.

Accounts of Jamaica begin with a chauffeur driven, white Cadillac ride to meet his astonished maternal grandmother. Johnny Rotten along for the trip stands in the background. Further trips include work and family holidays. Letts brushes shoulders with Joni Mitchell and Keith Richards and navigates a space somewhere between islanders and tourists. On another occasion he embarks on a potholed journey into the countryside for a dance, describing the set up as speakers are rigged directly to a power pole. But he entirely misses the main event due to a herbally induced time lapse.

In opening conversation with Mal Peachey, Letts reflects wryly, “After forty years of making films about youth culture, I’m the man they thought of as Britain’s only black video director”. He also includes a sobering encounter from the 80s. Already enjoying success in the UK and the US, Letts is invited to MTV in New York to do an interview, only to be told “We didn’t know you were Black”. Ironically, a few months later the video he shoots for Musical Youth’s hit Pass The Dutchie goes on to be the first to feature a Black artist on rotation on daytime MTV.

Appropriately, There And Black Again has a cinematic narrative. Thus a series of scenes dramatises key episodes, moving between locations, at work and play. The storytelling neatly draws many threads together into the fabric of Don Letts experience. Fortuitously, he seems to find resolution in most areas of his life. For example, walking the red carpet to the Ritzy in Brixton with his parents for the UK premiere of Dancehall Queen. Enhancing the narrative, illustrative photographs capture significant moments. The front endpaper is an iconic image at ACME by Sheila Rock.

Don Letts recalls largely happy personal relationships throughout adulthood. But where difficulty occurs, he is candid about complications. Furthermore, he seems to have the capacity to reconcile with significant others in matters of the heart. A united 60th birthday gathering is testimony to this.

Another moment of fulfilment comes in filming Paul McCartney for his Something New tour promo in 2013. Then there is his ongoing weekly BBC 6Music show which he describes as not unlike making a mix-tape.

The postscript features Letts in 2020 filming Sinéad O’Connor, for her version of Mahalia Jackson’s Trouble Of The World. The proceeds of the release go to Black Lives Matter charities. He concludes “Damn I’m here and Black again”.

There and Black Again – Don Letts in conversation with John Robb