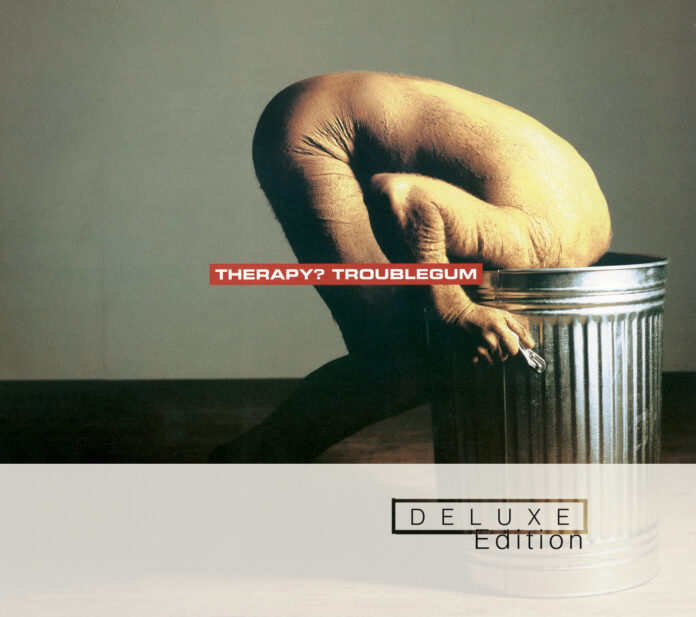 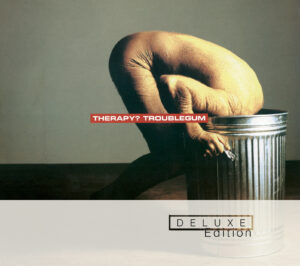 We take a fresh look at the seminal Therapy? release Troublegum twenty years on.

I don’t have an ejector seat in my car. I don’t need one. For the last twenty years (I can’t believe it is twenty years) I have carried my own personal escape mechanism on countless journeys in the shape of Therapy’s simply brilliant Troublegum. It may seem incredible, but twenty summers have indeed passed since this tightly compressed powder keg of vitriol was first lobbed into our collective psyche and created a yardstick by which a certain genre of music must be judged. Now the Mercury Music Prize nominated album has been re-issued as a deluxe 3 disc affair and reminds us again, as if it was necessary, of the scale of this achievement.

This 1994 release manages to distil the range of human despair, rage and paranoia into forty five minutes of almost perfect angst driven, hauntingly melodic noise. The opening bars of Knives leave the listener in no doubt that no quarter will be asked or given as we launch into the first of many joyously nihilistic choruses. The power of the recording is immense and crystal clear, this time benefitting from a re-master by Harvey Birrell, and every track plunges straight into your consciousness like a depth-charge.

From the first line of Knives, “My girlfriend says that I need help”, we are taken inside the tormented and psychotic mind that is Therapy?’s brilliant construct for the purpose of this musical examination of the human condition. This is a concept album in as far as you accept the concept that “The world is fucked and so am I” as he snarls on Stop it You’re Killing Me and each of the tracks on Troublegum follow in a similar vein of angst and despair. The detachment and self-loathing of Screamager gives way to the guttural contempt on Hellbelly as the trio harness noise and bend it into grotesquely irresistible, sing-along melodies.

With no tracks longer than four minutes on the album, the original Therapy? line- up of Andy Cairns, Fyfe Ewing and Michael McKeegan launch a series of controlled strikes that are calculated to have maximum impact.  The manic rocker of Nowhere followed by the pleading despair of Die Laughing are as good a coupling of tracks as you will hear on any album while tracks such as Unbeliever and Lunacy Booth are menacing brilliance.

However the real strength of Troublegum is that you take the album as a whole, there are no weaknesses, no tracks to craftily skip when no one’s around. This is a complete package of a private hell unleashed, individual torment shared and the brilliant cover of Joy Division’s Isolation sits perfectly within these confines. Despite the bleak nature of the lyric’s subject matter, they are often tongue in cheek and this sheds welcome shafts of light never more so than on the triumphant Trigger Inside when Cairns growls “Here comes a girl with perfect teeth, I bet she won’t be smiling at me, I know how Jeffrey Dahmer feels, Lonely”.

Speaking recently to Vive Le Rock, Andy Cairns spoke of his great memories of recording the album and how much it means to him as many of the songs were written in an instinctive manner. He also said how important Troublegum seems to have been to many people around the world at difficult stages in their life. There’s no doubt that there are certain moments where this album is the best available treatment and it hits the spot every time.

With this being a deluxe edition re-issue, there are two other discs containing various demos, B-sides and remixes all of which will no doubt be very welcome by fans. However, the main focus, now as twenty years ago, will deservedly be on the album itself. I hesitate to call it a masterpiece as to do so would be to imply that Therapy? have never matched it when their legions of fans know that they’ve never tried. One of the band’s guiding principles have been to plough new ground with each album (as the re-issue of Infernal Love at the same time shows) and that ensures that Troublegum stands alone as a brilliant artistic statement, as strong today as it ever has been.