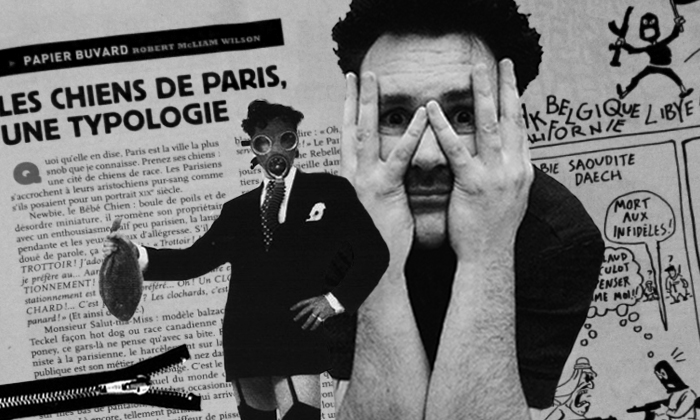 Therapy? are currently touring Disquiet, performing Infernal Love along with The Membranes across the UK in February and March. See their official website for tickets.

A resurgent Therapy? kick off the year with style in the French capital

Parisians are meant to be snooty with non-francophones but Andy Cairns gets everyone onside with an apology: “I’m sorry to speak to you all in English,” he says. “But mon francaise, c’est merde. Then again I’m from Northern Ireland so my English is merde too.”

Tonight the city is forgiving. Applause and urgent whistles welcome first song ‘Still Hurts’, the crowd as keen to kick off as the band. The punchy chords and smack of the drums prove that Therapy? are as loud, gnarly and energetic as when they first played Paris at L’Espace Ornano on the other side of the Sacre-Coeur back in 1992.

Since then, though, Paris has changed and so have Therapy?. The Northern Irish trio arrived in Europe on the back of major-label debut Nurse, an album rightly celebrated for its velocity, psychodrama and songs pulled from the volatile cross-currents of punk, metal and techno.

Today they have twenty-five years of material to choose from, playing first single ‘Meat Abstract’ along with their most recent, the desolate yet comforting threnody ‘Deathstimate’. The riff is so so heavy it fritzes the wall-mounted televisions which show distorted images that seem beamed in from a dangerous future.

There are as many songs from Disquiet as there are from Troublegum, and the cheers for the mid-nineties songs show that theyíre lodged in rock history like metal hammered into granite. There’s the energized Joy Division cover ‘Isolation’, the always-affirming ‘Die Laughing’ dedicated to Lemmy, and ‘Turn’ dedicated to David Bowie. The chorus, “You turn – and face the strange” is roared by singer and crowd in one voice.

It’s hard to think of death in the rock world without thinking about the loathly murders of 13 November, particularly those at Le Bataclan less than three miles away. Therapy? have performed there in their time but tonight the Backstage, where fellow Northern Irish forefathers Stiff Little Fingers played two days after the attacks, is a site of celebration.

The crowd drink Grimbergen until the taps run dry, the front rows filled with men going wild in the stramash. On a perch stage right, an impossibly cool lady wears ink-dark Wayfarers under a tumble of curly hair, dancing as if at a rave and pausing only to cool off with a Japanese fold-out fan after ‘Teethgrinder’.

“I never thought it would be colder than Paris than it is in Ireland,” says Michael McKeegan, recognizing that outdoors Montmartre is as cold as a Martini in Moscow. “But this is a love song,” says Cairns. “It’s called ‘Torment, Sorrow, Misery, Strife’.”

And here’s one reason people are flocking to join Therapy?’s upward curve: the seam of humour and consolation in the songs, the way they can sing about lifeís minor bummers in a major key. Thereís a joke during the guitar-tuning silence before ‘Misery’: “This is a song by John Cage, who calls it ‘4.33’. We play it faster so we call it ‘4.27’.”

Cairns does make a foray into French introducing ‘Words Fail Me’, a song about l’esprit de l’escalier, the feeling of having the perfect thing to say only when itís too late to speak. ‘Idiot Cousin’ impresses with the weight of its falling chords, the chorus nodding to John Lydon’s description of his childhood family relations: “I hate you more than you hate me”.

And despite calls for ‘Little Tongues First’ from Therapy?’s weirdest and perhaps Stoogiest album Suicide Pact – You First it’s the inclusion of ‘Rust’ which again reminds of the number of belting songs the band has but also of the power of drummer Neil Cooper, tonight an invisible engine hidden in the darkness.

It’s an apt idea for the start of a contradictory year where we’re forced to mourn our stars while admitting that the world that made them may have changed irreparably. The mainstream, at least, seems to be celebrating the spirit of punk only in exhibitions and nostalgic anniversary issues.

Or perhaps Therapy? are unique in remaining hungry, receptive and determined since 1989. Seeing them tonight is to see that heavy, oddball alternative music still has the humble value of getting people outdoors when they might otherwise have hidden, getting people into the city to celebrate life their own way, which is a way of continuing, of carrying on.