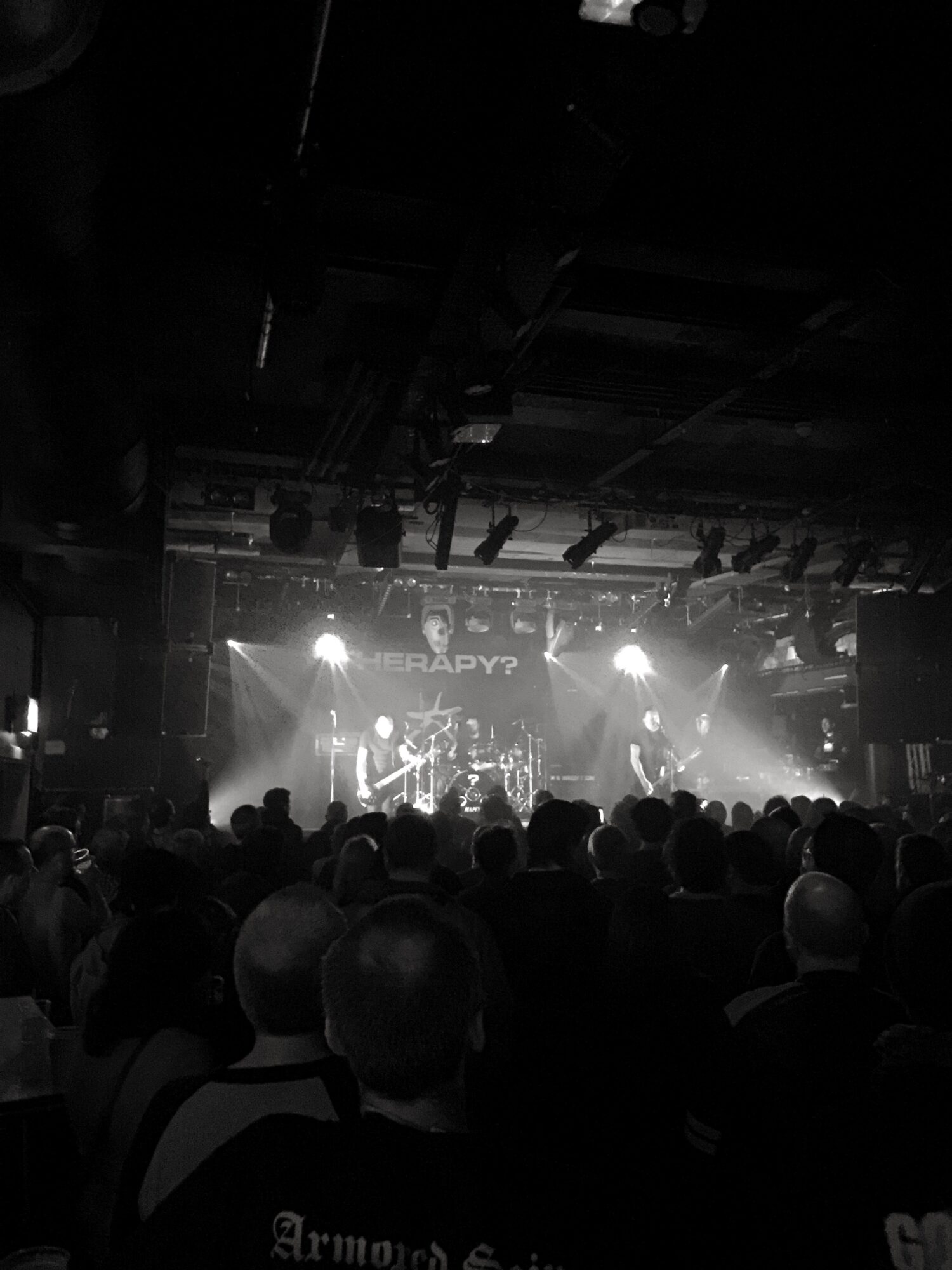 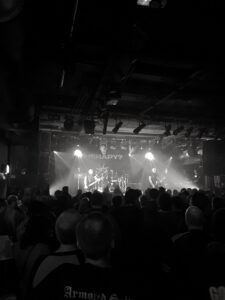 So James Joyce is still fucking his sister apparently and poetic emotional songs about confusion and alienation are still being made sense of 20 years later as Therapy with or without their question mark bring their Infernal Love album in its entirety back to the live arena.

Trying to get back into this confused post teen state of mind is never going to be simple but even as Andy Cairns asks the audience to dance to his darkest creations it still makes sense as the songs confused power and melodic brilliance cuts through the years.

From he opening tension of Epilepsy to their stripped down string driven version of Husker Du’s Diane Therapy on fire. On one level this is a hot sweaty celebration of an album delivered with an intense power. On the other it’s a celebration of the strength of introverted music cranked loud. Therapy are a band that have always brought the rock but with a whole plethora of their own ideas.

Listening and watching them run through the album you marvel at their craft and the way they have always managed to cram some pretty weird and wonderful ideas into their natural gift for creating perfect rock chassis. There maybe noise and darkness here but there are also tunes. There may be the sweat, volume and bluster of a rock show but there is also a surprisingly emotional nakedness. There may be hints of the infernal machine like crank of Big Black but there is an emtional uncertainty that puts the human in the machine.

These songs may be from 21 years ago but the way they play them now sounds cutting edge. Infernal Love was proof that Therapy could deliver far more than the bluster of rock or the sneer of punk and that loud guitars are a great vehicle for delivering emotional confusion.

This rock archeology is an interesting business.

How can you dig deep into your past and keep those albums somehow relevant.

Therapy have been touring their Infernal Love album round Europe attempting and succeeding in making sense of their darkest hour and follow up to the equally red raw Troublegum with the added wisdom of middle age and making it work.

Like many bands who dare to dress dark and not recoil from the dread ‘rock’word, Therapy are far bigger than most commentators would ever imagine. Sold out gigs and a fierce fan loyalty have see the band survive into decades. This may be down to their songwriting craft and also their ability to make an old trick sound now. Rock has been around for centuries but with an ear to other musics and the on going technology Therapy have somehow fleshed out their Infernal Love album and made it sound enormous with the sheen of modern.

The album’s darkness sees it as a neat nineties companion piece to the Manics Holy Bible or Nirvana’s high decibel nervous breakdown. There was a point in time when Therapy were touted as fellow travellers to these bands – a vanguard of troublegummed young men with their heart on their sleeves and their guitars turned up loud. They were scoring top 5 albums but somehow missed out on the critic cannon which is to do them a disservice as they were as eloquent and inventive as any of their peers. Maybe this touting of the whole album is a reaffirmation of it dark and thrilling power and a reminder of their craft and skill.

There is still that interesting crossroads of the mish mash of their Ulster punk roots when as spotty oik Andy Cairns ran around the classic punk scene from the Belfast and then added a dose of metal and industrial and post punk into the mix to create something they truly owned. Therapy were a Joy Division who came from rock, a punk band who could really play and an industrial band who could do pop – ultimately who cares? Therapy then and now have their own thing going.

These were the quiet, swotty kids who were full of emotion and craft who wrote songs of the desolation of their surroundings and the emotional storms that most young men are full of but are far too north European to blub out unless armed with a guitar and a melodic craft.

That was always Therapy’s trick. They could make the darkness mosh pit defiantly, you could dance to their radio, you could get envloped by anthemic choruses or intrigued by weird textures.

On these Irish dates they take great joy on jumping around on the bones of their album, the in a dark place sentiment of the songs has long since been replaced by a contentment but also a loving respect for their neo-bipolar creative spark and that’s a good thing. No one could wish the dark side on anyone for ever and if the band can still deliver these inventive slabs of pop noise with this much care and power then the exercise is totally wired and worth it.

The band also have the musical chops to tackle all the subtleties and musical prowess of the album – Michael McKeegan still delivers great bass full of sub sonic or grating grind as he bounces around the stage like a joyous wild hobbit whilst Neil Cooper (former Cable drummer) is more than just an adequate replacement for the band’s original drummer, Fyfe Ewing – who created his own style of drumming with snare fills that were almost like lead guitar breaks before bailing mid tour when the band were promoting their follow up Infernal Love album.

Nowhere is a tease with a quote from the Beatles Nowhere Man delivered in the build up before exploding into the seismic chorus. You can’t help wishing that nineties punk itself had taken this route and created a music as dark and powerful as this instead of joylessly bouncing along to the dumb nose picking jokes and hideous perfect harmonies.

After a five minute break the band return for Still Hurts from the new album Disquiet as prof that the band are still creating at full back and then its the hits and the set ends with a climactic run through the classic Teethgrinder and aforementioned Potato Junkie complete with its quote from the Stooges I Wanna Be Your Dog – the two songs that set the band on their personal infernal fire. Then it’s Screamager, Knives and Nowhere as the gig melts down into a celebration of this gem of a group who operate in the shadows whilst still garnering a huge Europe wide support.