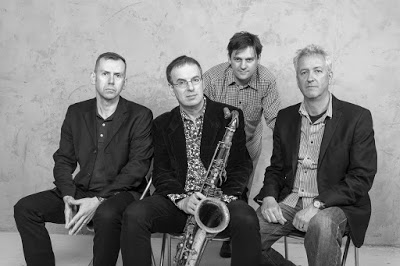 A rare London date for Theo Travis’s Double Talk, one of the many projects of the musical polymath. Louder Than War’s Craig Chaligne reviews.

This quartet’s aim is too explore the progressive side of Travis’ playing that he developed while playing with Soft Machine, Steven Wilson and many more. The repertoire for this show at Finchley’s ArtsDepot was centred around Double Talk’s two LP’s but also includes some pieces by other bands and material from Travis’s solo albums. Starting on soprano sax for “Ascending” (which featured the first of many excellent guitar solo’s by Mike Outram), Travis then moved to baritone saxophone for an excellent take on Traffic’s “Glad” where Pete Whittaker’s Hammond wizardry was put to good use. The title track of their latest effort  saw Travis swap between sax and flute for a beautiful multi part suite full of melodic inventivity and surprises. “And So It Seemed” from Double Talk’s self titled debut closed off the first set with another superlative solo by Mike Outram, making it one of the evenings highlights, the melody ebbing and flowing throughout the piece with drummer Nic France anchoring the whole. The contrast between the virtuosity and intensity displayed during the songs and Travis’ warm and easy going banter made for an interesting contrast.

The second set started with a little detour in Theo’s solo repertoire with the excellent “The Mystic And The Emperor” and a tune from his debut album “Shore Thing”, one of the evening’s mellower moments with the saxophone closing off the song in a whisper. Another good share of Transgression tracks followed with “Fire Mountain” and “Song For Samuel” (which Theo dedicated to his son) while another epic track, the only extract from Theo’s Tangent side project with Andy Tillison titled “A Place In The Queue” was reduced from its original twenty-five minute duration to a ten minute instrumental version which managed to retain the majesty of the original. A splendid evening.