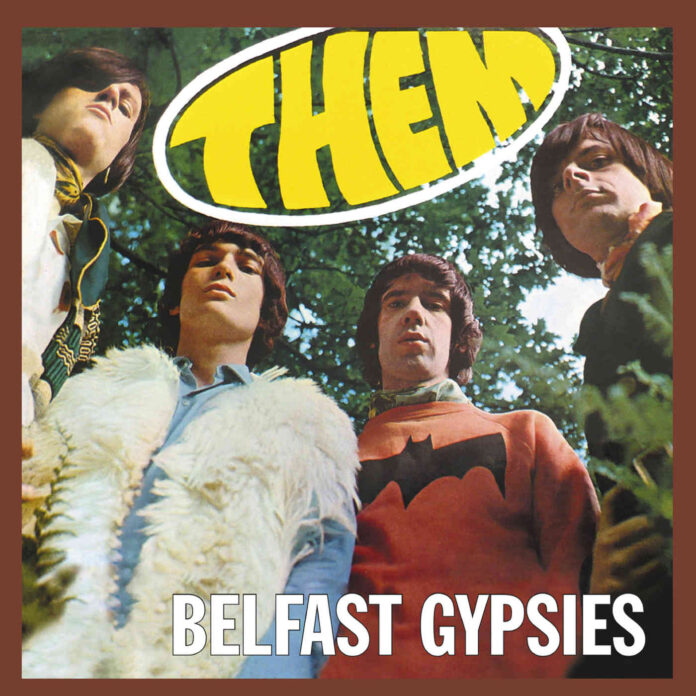 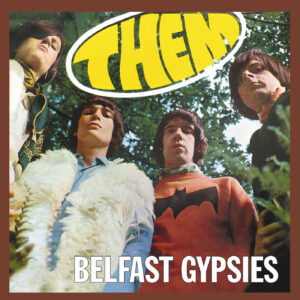 Reissue of the 1967 album by a post-Van Morrison version of Them, led at the time by the McAuley brothers Jackie and Pat and also variously known as the Other Them, Belfast Gypsies and The Freaks Of Nature… this record was in part produced by US music huckster Kim Fowley.  Ian Canty views the often confusing saga of Them.

The music of the 1960s may be known for the steps forward made in sound and altruistic intents of its creators, but the business side was rife with old-school flim-flam merchants eager to make a fast buck. Belfast r&b hooligans Them suffered as much as anyone. After making their name at sweat-drenched and raucous gigs at the Maritime Hotel in their hometown, they were signed by Decca Records in 1964. After two big hit singles in quick succession in Baby Please Don’t Go and Here Comes The Night, it became the usual story of management plugging the band into a back-breaking schedule, in an effort to wring every last penny out of them.

After the Angry Young Them debut album Pat McAuley decided he had enough of this, with the session musos like Jimmy Page being brought in on their recordings and the inference that it was just Van’s backing band also understandably rankling. But more importantly his patience with the management’s questionable motives and methods was totally spent. Also bowing out at the time was original guitarist Billy Harrison.

Banding together, these two reasoned they had as good a claim as anyone to the name and with the original band’s future unsure, put together a new Them line up including Skip Alan (later of the Pretty Things). The Van Morrison group’s management hit back, threatening legal action on the use of the name and this brief aggregation foundered, with Alan and Harrison quickly departing. The latter poured cold water on the McAuley version of Them, saying it was “not the group the kids know”.

The legal wrangling continued as McAuley brought in a new line up, led by his brother Jackie on vocals with Mark Scott and Ken McLeod completing the band. It’s this version of the band which features here. A March 1966 court ruling meant the band could use the name Them outside of the UK, but in Britain they had to be called by another name. They sardonically choose the Other Them as their UK moniker, but what could have been seen as trading on their past glories didn’t result in many offers to gig or record. I suppose the concert hall management and record labels wanted the Morrison band. They did fill in at a live performance for them at least once, oddly enough on the behest of Morrison’s own management.

Bearing in mind their various problems with music business types, it is perhaps ironic that deeply dodgy customer Kim Fowley helmed their one and only LP. Fowley stumbled across the band in London and whisked them into the famous Regent Sound studio in Denmark Street aka Tin Pan Alley. What was set down over the course of three sessions forms the basis for the Belfast Gypsies album. One thing that is immediately apparent is that this version of Them were as tough a bunch of r&b punks that ever drew breath. Jackie McAuley’s vocals border on sheer, beautiful mayhem and the snotty, ramshackle attack of the band is a joy to behold.

The album commences with Gloria’s Dream, not hiding in any way that this effort was obviously was a reworking of Them’s key tune. The refining of a hit formula in an attempt to repeat a success was common practice in the 1960s, but the familiarity of the riff doesn’t make it any less enjoyable. The Crazy World Inside Me is the Stones wound up to the max and the punky sneer of People, Let’s Freak Out was released as a single under the Freaks Of Nature name on Island in the UK. Boom Boom and The Last Will And Testament aka St James Infirmary showed that this Them still had a hotline to the blues, but their version of Portland Town was more pop and not too far away from the Animals in sound.

The self-pitying and salacious lyrics of Suicide Song is launched off into parody mode by a rough edged performance and Jackie McAuley dragging out each syllable for all they are worth. The album ends with perfect punker 60s Secret Police, a rewrite of Fowley’s own The Trip, but much, much more manic. A more than tidy set of headlong rush, spiky rough and tumble and pure fun, with only the choral drone Aria Of The Fallen Angels, actually Bach’s Aria In D, a real misstep.

The nine bonus tracks featured here round up single and EP versions of songs from the album itself. Also we have a great, raw take of Dylan’s garage band favourite It’s All Over Now, Baby Blue and a super tough I Want You, originally by the Graham Bond Organization. These two represent the earliest available recordings of the Other Them, predating Fowley’s involvement and proving beyond doubt that this band was more than wild before he turned up. Both of these recordings are wonderfully unrestrained and potent.

The final item here, a mod dance tune entitled The Gorilla, doesn’t seem to have much to do with the Other Them at all. Its provenance is shrouded in mystery (maybe Shotgun Express under another name, as is hinted at in the accompanying booklet), but this is a fun novelty item issued under the Them moniker, so here it is. The inclusion of these three tracks represent an upgrade from Rev-Ola’s 2003 release of the LP and they add well to what was already an attractive package. We also get a detailed sleeve note, with contributions from band members Jackie McAuley and the late Ken McLeod included.

It is curious but apt that the band choose to cover harmonica-workout Midnight Train, a contemporary waxing by the Spencer Davis Group, because like them they too were a band who produced some rollicking sounds minus what was seen as their leading light. Unfortunately for the Other Them, this LP didn’t even see release in the UK, only coming out on Sonet in Sweden and Denmark in August 1967. One wonders why no British label opted to take a punt on it, though bearing in mind the rapidly changing music scene of the 60s, perhaps in the Summer Of Love such burning blues punk would have been deemed to “heavy”?

Gloria’s Dream/Secret Police did make it out in the US on the Loma label and is thought to be one of Iggy Pop’s favourite recordings of the era, loving the musical chaos. Though they never made much headway at the time, this is a marvellous collection of garage punk rhythm and blues. The Other Them, or the Belfast Gypsies, or the Freaks Of Nature, whatever the name they were a mightily powerful explosion of sound and this collection still sounds great in 2020 where other, hipper outfits now seem hopelessly dated. It could have been cut yesterday, it is that fresh and vibrantly alive.