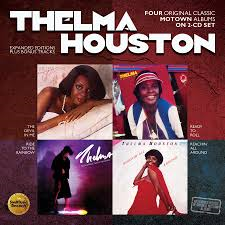 Actually a reissue of the Don’t Leave Me This Way hitmaker’s four albums recorded for Motown between 1977 and 1982, The Devil In Me, Ready To Roll, Ride To The Rainbow and Reachin’ For All, plus a couple of bonus tracks……LTW’s Ian Canty cops an earful, but don’t tell Thelma Bob! (gratuitous ‘Likely Lads’ joke)….

Thelma Houston (no relation to Whitney) grew up in the deep South of the US, in Leland, Mississippi. She started singing Gospel and after marrying and having kids young, she struck out for a career in music in the late 1960’s. After some recordings for the Dunhill label (most notably a cover of the Stones’ Jumpin’ Jack Flash and Lauro Nyro’s Save The Country, which made a small dent on the Billboard chart at number 74), her abundant vocal skills alerted Soul Music’s biggest name Motown Records and she duly signed for them in 1971.

While concentrating mainly on singing, she also cultivated somewhat of an acting career. In 1974 she appeared in The Marty Feldman Comedy Machine, a vehicle for the mercurial but highly talented comic, where she played various characters in some of the skits. Cementing her comedic links, she also cropped up on the Two Ronnies, but sadly only as a musical guest this time and not taking part in any sketches.

After scoring a minor hit in You’ve Been Doing Wrong For So Long she really hit the pay-dirt with her take on Gamble, Huff and Gilbert’s Don’t Leave Me This Way in 1976. This one hit the top spot in America and made number 13 in the UK, though many may be more familiar with the Communards’ later version.

The aftermath of this success is the point where this collection makes its entry. It is pretty much stating the obvious that Thelma struggled with following up her number 1 commercially, only once again grazing the Top 40 in the States with Saturday Night, Sunday Morning in 1979 (and it is featured as the first track on Ride To The Rainbow here). However it wasn’t for the want of trying and Houston could always be relied upon to produce a cracking vocal performance, often turning an okay song and arrangement into gold.

The Devil In Me, her 1977 album which kicks off this selection, may not have had anything as infectious as that song, but it is a more than respectable showing with a good amount to recommend. I particularly love some of the guitar playing on this one – little bits of fuzz and R&B twang, always tasteful and fitting in, but providing a nice rough edge which takes some tracks away from being merely MOR Soul. It doesn’t list the players on this one, but it seems like Wah Wah Watson may have been involved (he did play on the next LP), so a big pat on the back for him if it was.

As you might expect the LP is a mix of danceable items and slowies, Motown by the mid-70s weren’t quite at the cutting edge of Soul anymore and there is a tendency on show in the production to dress things up in snazzy arrangements and syrupy strings when they weren’t entirely necessary. Nevertheless Houston’s personality shines through on the symphonic Soul of the life-affirming, never-say-die It’s Just Me Feeling Good and the Jazzy vocal showcase Give Me Something To Believe In. Memories is pretty standard balladry, but it is followed by the smooth sexiness of I’ve Got The Devil In Me.

1978’s Ready To Roll followed a similar format, but is a little more pointed towards a Disco direction, with some good dance numbers like the synth-enhanced I Wanna Start My Life All Over Again (and who hasn’t sympathised with that sentiment at one time or another?) and Everybody’s Got A Story, which is fast, fine and Funky. Can’t We Try in contrast mines a sparse and slow atmosphere, very good indeed. Overall this LP is not quite as overloaded with strings etc as the previous one and the songs are allowed to breathe a little more, which is a real positive. Both the above albums featured on disc one of this collection, along with a bonus track If You Won’t Let Me Walk On Water, a single b-side which has a really nice deep Gospel Soul feel.

Over to disc 2, next up was 1979’s Ride To The Rainbow. This in my opinion is the best album of the set – Thelma is given the chance to really cut loose for once and get Funky, which all works wonderfully. There is what seems a conscious move towards a more “street” sound with the Motown schmaltz dispenser being kept firmly on the back burner. Even the more ballad-style songs like Imaginary Paradise and Just A Little Piece Of You (a Stevie Wonder/Syreeta song) still have R&B swagger and an earthy Funk swing to them.

The tough and assertive title track and dancefloor filler Saturday Night, Sunday Morning are both excellent and Bobby Belle’s I Wanna Be Back in Love Again hits all the right notes, before speeding up even faster in its coda. The slower songs work far better in such storming company, as the classy Paying for It With My Heart proves. Give It To Me ends the album in fine, Funky form and Ride To The Rainbow really should have put Thelma Houston right back in the charts, but it seems by then Motown had lost interest and barely bothered to promote the LP. A real lost opportunity.

It was therefore no real surprise that by the time of the final album here Reachin’ For All, Thelma had already moved onto RCA. Motown put together this collection from various unreleased sessions set down during her spell with Berry Gordy’s juggernaut after she had flown the coop. The flowing Soul of You Were Never My Friend starts things off well, even if it does sound like a bit of a throwback to the sound of a few years beforehand. It had probably been sitting in the vaults since then. Unsurprisingly this record is a bit of a mish-mash, but there is some good items aboard.

Slower songs dominate, but towards the end things take a Bluesy turn for the better with both A Little Bit A Heaven And A Little Bit A Hell (she did favour the long title!) and the segue between the old standard Stormy Weather and Ann Peebles’ hit I Can’t Stand The Rain being full on and gutsy, real Soul in fact. Appended to this disc is Love Masterpiece, a fine piece of Space Funk/Disco that was featured in the soundtrack of the film Thank God It’s Friday. This ends the collection on a fittingly upbeat and irrepressible note.

Overall this new twofer is probably more for the committed Soul fan and Motown anorak, but that is not to deny the clear talent of Houston and the musicians backing her. Ride To The Rainbow is a peach of the 70s Soul/Disco crossover and is well worth your attention. It would be a push to say that this LP signposts the harder Funk sounds that would flourish in the 80s, but it’s a lot harder than the other three albums. Each of those records have their bright spots, but are hardly classics.

I tend towards feeling that Houston got fed through the Motown machine without much thought for her as an individual artist. It was only when the label lost interest, she got a real chance to put her stamp on things and loosen up a bit. During her tenure with the company, it’s hard not to conclude they really dropped the ball, treating Houston more as a reliable, but second-string artist, kitting her out with slightly dated arrangements and songs. A shame, because as Ride Me To The Rainbow proved, she could easily cut it in the white heat of the late Disco period.