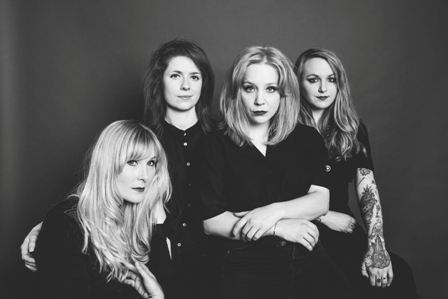 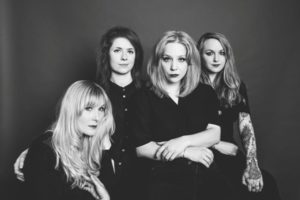 London’s leading garage-rock quartet The Franklys have been touring hard since the release of their debut album and are kicking off 2019 with their brand new EP ‘Framed’, out April 5th. Today we’re pleased to be premiering new single ‘Illusions’,  a gut-punch power-diving slice of no apologies rock n’ roll. It’s quite frankly, awesome. Don’t miss them on April 11th in London at The Finsbury playing for local heroes Some Weird Sin.

Speaking of the single, they say “The track is about how social media has taken over our lives and become a part of who we are. We create illusions about ourselves and constantly feel a need to put everything we do and feel on the internet for everyone to see, like it’s some kind of show.”

Drawn to the raw and engaging indie rock scene emerging from the UK, Swedish Jen Ahlkvist and Fanny Broberg packed up their guitars to come to London intent on carving out a new vital sound. After crossing paths with bassist Zoe Biggs and drummer Lexi Clark, The Franklys were formed with a determination for creating energetic and powerful rock music.

Wasting no time, the band threw themselves into relentless touring, extending their reach across the UK, Europe and America. After performances at Isle of Wight and Download festivals, they completed the circuit of O2 venues in the UK opening up for Airbourne. The Franklys went on to feature in an Apple Music advert, exclusively aired during The Brit Awards 2017, and released their debut album ‘Are You Listening?’ later that same year. The release of their single ‘Castaway’ from the album was described as ‘the best thing they’ve done to date’ by Steve Lamacq of BBC 6 Music.

The group have built a reputation in London and beyond as a “must see” live band, combining dark and heavy riffs with frenetic and dynamic on stage performances. 2018 saw The Franklys complete four European tours alongside various UK dates, and record their new EP due for release on April 5th.