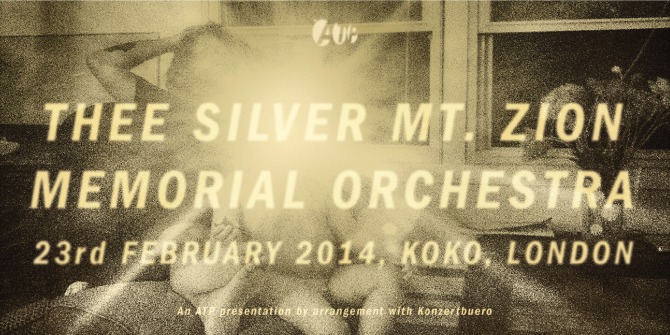 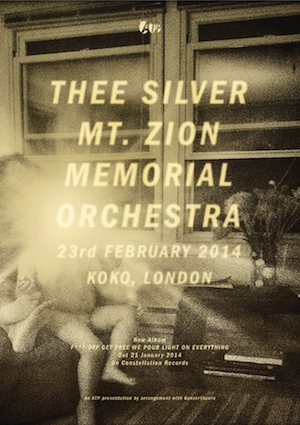 Montreal’s ragged singers give their latest vision of the apocalypse a live airing. Louder Than War’s Paul Margree finds hope amid the ruined cities and burning malls.

“We live on the island called Montreal … we make a lot of noise … because we love each other”. These are the first words we hear on Fuck Off Get Free We Pour Light On Everything, the seventh album by Thee Silver Mt. Zion Memorial Orchestra. They’re spoken by de facto frontman Ephrim Menuck’s son, Ezra, and, as a statement of intent for the band, they’re pretty good.

2010s Kollaps Tradixionales showcased a lean, rock-inflected approach for TSMZMO. Their latest long-player, released in January, (our review) is a decisive step in this new direction, bringing a rangy punk abrasiveness to the group’s long-form compositions.

With just five members, they’re a tight and focused outfit. Clustered in a rough semicircle around drummer David Payant on stage at Camden’s Koko, its opulent decor and glitter ball hanging from the ceiling bring a rather glam vibe to proceedings.

Payant is a marvellous powerhouse, giving the new songs a pounding heft ensuring that they never descend into generic post-rock drift despite many of the tunes clocking in at more than 10 minutes. He’s on great form for new song “All The Kings Are Dead”, the driving motorik of the song’s first movement giving way to a slower tribal groove that opens the latter half of the piece up beautifully.

Apart from this new tune, we get the new album, mostly. It doesn’t sound like the band are going through the motions though – opener Fuck Off Get Free (For The Island Of Montreal) is feckin’ ace, all echoing fuzzy drones and strangled vocals. “There’s fire in my dreams,” intones Menuck, laying on us the first of many visions of the end times like some crazed mystic with a Les Paul guitar.

Things aren’t so heavy between songs, thankfully, Menuck giving us a nervy, sardonic commentary on the album and its genesis, riffing on the commercial potential of a song with the word ‘austerity’ in the title and subverting the over analytic tendencies of fans. “Between these two sons we’re gonna play a really long G,” he says. “It doesn’t mean … anything”.

Now, I’m not going to talk about the complete tosser who heckled Menuck throughout the first half of the show, except to say this: if, Mr Tosser, you do know the band, as you assured us when we told you to shut up, then surely you’ll know better than to shout slurred and incomprehensible ‘banter’ when they’re introducing a song, right? RIGHT?

A blip, anyway, in a fine show. Rains Thru The Roof Of Thee Grande Ballroom (For Capital Steez) was a tender delight, its twin processed violins an inventive replacement for the recorded version’s glum mellotron lines. In fact, the violins, marshalled flamboyantly by Sophie Trudeau and Jessica Moss, were a joy throughout and crucial to the bands mix of melody, distortion and drone.

The standout song of the night for me however, was What We Loved Was Not Enough. An emotionally wrenching vision of a society in ruin, like Cormac McCarthy’s The Road in waltz time. “There’ll be war in our cities, there’ll be riots in the mall, there’ll be blood on our doorsteps,” Menuck sings as the violins carve aching melodies through the fuzz and clamour.

Somehow, though, Menuck and his troubadours manage to snatch consolation from the debris. “Kiss it quick and rise again” they sing. Is everything going to be alright after all? Perhaps that’s a stretch too far, but Thee Silver Mt. Zion Memorial Orchestra, like their counterparts in GY!BE hold out for the affirming power of hope amid all this despair.

Meanwhile, of course we have the music. There’s a lot of love in the room tonight for the band and it’s thoroughly deserved. A final song, the slight and glistening Little Ones Run and they’re off, leaving us with the feeling that although the world may be a grim place, it’s a little bit easier to handle with Thee Silver Mt. Zion Memorial Orchestra in it.

Thee Silver Mt Zion’s website can be viewed here or you can visit the band’s page on their label’s site here.

All words by Paul Margree. More work by Paul can be found in their author’s archive. He writes about experimental music at We Need No Swords. Or you can follow him on Twitter.