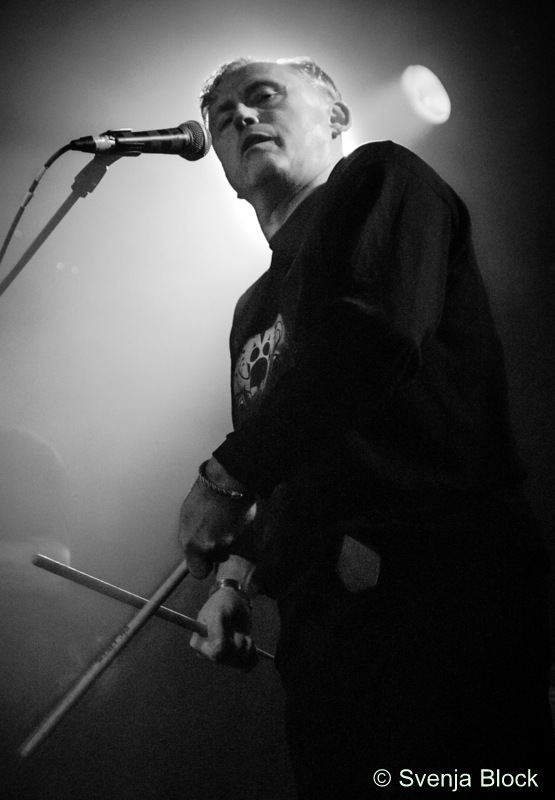 The eighties post-punk legends Theatre of Hate headline an excellent evening at The Garage. Louder Than War’s Craig Chaligne reviews with photos from Svenja Block.

Punk is Good and Punk is going strong, this triple bill at The Garage was sold out, Wreckless Eric keeps adding London dates to his European tour to satisfy demands and there has never so many Ramones T-shirts on the street (although half of the people wearing them have probably never listened to the band), the 1977 generation’s is doing great. First first on the bill tonight are Healthy Junkies, a London Based quartet channelling the spirit of Iggy Pop, Blondie, Bauhaus and Killing Joke. Formed around the duo of French singer Nina Courson and British guitarist Phil Honey Jones, they have been treading the boards for 6 years and have 3 LP’s under their belt.  Mainly consisting of new songs from their new LP “Box of Chaos” (Never Want It Again, Je Suis Free, Witches Of Lust), the band’s set was solid and valiant with Phil Replacement-ish riffing complementing Nina’s voice.

Next on was not an offspring of the 1977 generation but a real member of the 1979 one, Spizzenergi with theit manic frontman regularly tour with Spear of Destiny so it wasn’t a surprise to see them open for Theatre of Hate at The Garage. Spizz madder than ever, decked in full sci-fi fluoresent regalia entertained the crowd for almost a full hour, going from “Mega City” from the Spizzenergi:2 period to a truncated version of Star-Spangled banner that saw him stomp an american flag and concluding with a great cover of Roxy Music’s “Virginia Plain”.

And then it was time for the main part of the meal, the incantatory post-punk of Theatre of Hate. The band reformed on a semi-permanent basis to celebrate the 30th anniversary of their “Westerworld” album in 2012 and have been touring the UK regularly ever since with  some new recordings to be released in 2016. Tonight playing at a volume that probably got rid of most of the facial hair of the first ten rows, the band absolutely ripped their hearts out  with Kirk Brandon ambling on the stage like a man possessed, clenching his fist and declaiming this set of dark songs like he had written them yesterday.  The band simply buried the recorded versions of the songs instilling a new energy in their repertoire. The intensity of songs such as “Incinerator”, “The Hop”, “Rebel Without A Brain” backed by the pulsating bass of Stan Stammers and the elongated sax rave ups of John Lennard reached a different level. No wonder they can still play London twice a year and sell out shows.  The band however kept their best cartridges for the end with a trio composed of their finest songs (“Original Sin”, “Legion and “Do You Believe in The Westworld”).