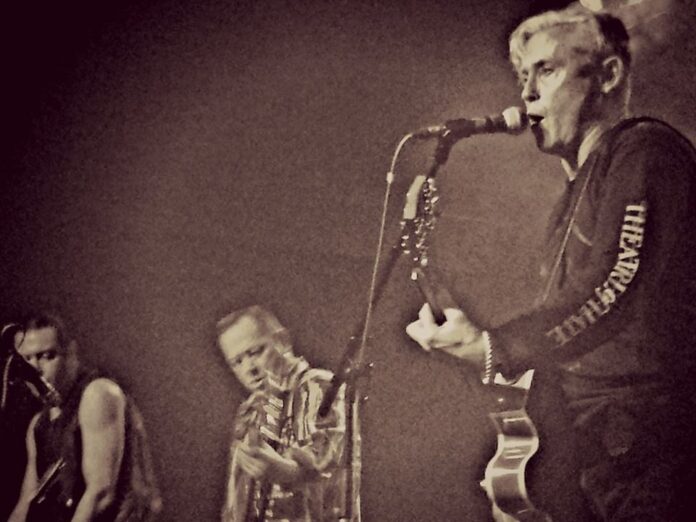 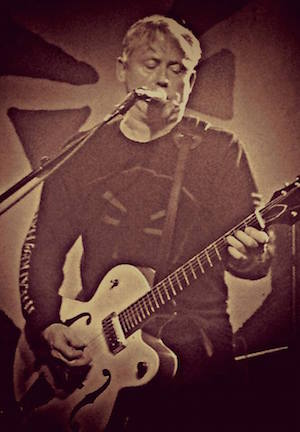 Unduly underrated as a post-punk band, our reviewer finds that those heading to Theatre of Hate’s current tour are finely rewarded.

“This is Jeremy Vine’s favourite song. No, truly it is”, chuckles Kirk Brandon mischievously, before his band launch into gig-closer ‘Propaganda’. The irony of a such-titled song being high on the play list of the BBC’s interrogator-general isn’t lost on the Theatre of Hate front man.

Brandon, you see, has been all but wiped from the musical history of post-punk Britain despite making a significant and ongoing contribution to it.

Theatre of Hate followed the visceral, angst-filled energy of The Pack and was the predecessor to the much-maligned, hugely underrated but still splendidly active Spear of Destiny. Yet their names are barely spoken outside of a few, Vine included, who continue to know better.

Two months ago Brandon was touring under the Spear moniker, celebrating the release of a new studio album, 31. Yes, that’s 31 as in 31 years since the release of SOD’s debut opus. It’s a longevity which has probably cost him the plaudits he deserves. While his contemporaries have remained trapped in a moment years past or have gone on hiatus, returning to fanfares of questionable merit, Brandon has soldiered on through numerous personnel changes and near-death experiences to produce still-relevant but too often ignored music.

Tonight, though, he allows himself and his audience to indulge in a night of nostalgia. One of six dates in total teaming up original TOH cohorts Stan Stammers and John ‘Boy’ Lennard with ex-New Model Army and current SOD guitarist Adrian Portas and Buzzcocks drummer Danny Farrant.  It’s an ‘alternative’ supergroup of some distinction and so, not surprisingly, it delivers a magnificent sound.

Set opener ‘Slave’ is newly-penned yet slips seamlessly into debut release ‘Legion’, a song 34 years its senior, with Lennard’s swirling saxophone to the fore as a reminder of what made the TOH sound unique among the slew of bands to emerge from the London punk scene of the late 1970’s.

That and the bass playing of the onstage ball of energy that is Stan Stammers. There are not many men in their 50’s who can carry off the wearing of a pair of white brothel creepers, never mind men of that vintage who can do the wearing while holding a 400-strong crowd agog at the majesty of their musicianship. But then there are not may bass players like Stan Stammers. Stammers is a true master of his art, a rhythm section all of his own. He prowls the stage, the bass his ever-trusty companion, duelling with Lennard’s sax, the combination resonating through songs like ‘My Own Invention’ and ‘Judgement Hymn’ to capture perfectly the atmospheric sound of a post-punk landscape.

And then, stage centre, there is Brandon. He may have turned 58 earlier this year but age is no barrier to a performer on top of his game and tonight he’s at his best, the trademark blonde quiff a little thinner and greyer maybe but the voice as booming and operatic as ever as he shadow boxes his way through ‘Original Sin’ and the oh-so-poignant and relevant ‘Poppies’.

He’s a true performer, a caught in the moment professional one minute, wrapped in concentration with the mighty Gretsch guitar strapped over his shoulder while delivering the perfect anti-pop of ‘The Hop’, while the next enjoying a laugh with Stammers and Portas as they duel on ‘Do You Believe in the Westworld’. As if to emphasise the musical diversity of this line-up, Brandon and Stammers enjoy some tom-tom thumping at the end of their Mick Jones-produced cinematic masterpiece.

The party atmosphere generated on stage is replicated among the crowd of 40 and 50 somethings who visibly revel in seeing fond-held memories performed in front of their very eyes.

It’s a coming together of minds, it just remains baffling that so few minds seem willing to acknowledge TOH’s place in the post-punk pantheon. Long live the past, indeed.

All words by Andy Lowe. This is Andy’s first piece for Louder Than War.