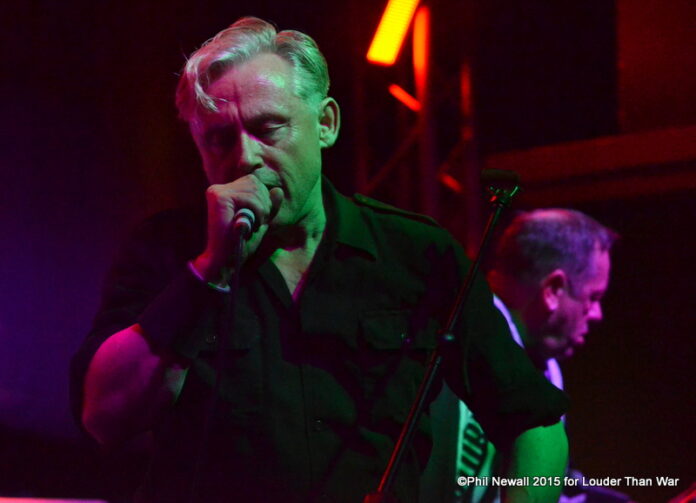 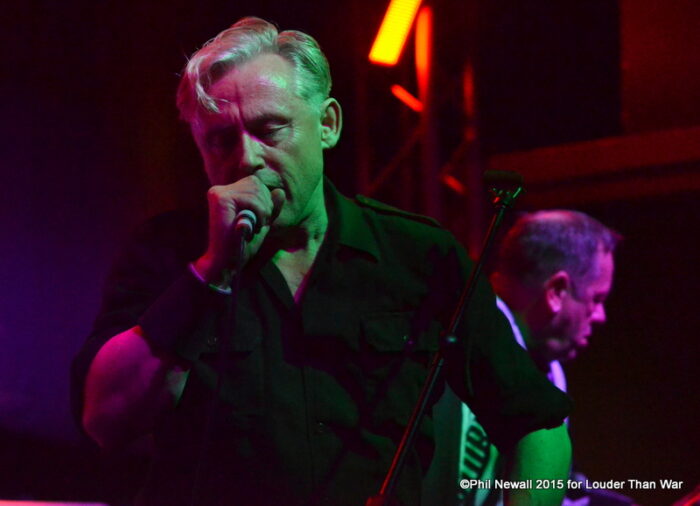 Perhaps it’s in Kirk Brandon’s performance contract that when he plays in the North West, the gig is always held in an upstairs venue, and that said gig is to receive no advertising?

Was certainly the case when I was fortunate enough to see him performing an AKoustic (sic) set in Chester back in March 2014; the clause appears to continue as I only became aware of this gig when I saw a poster on the wall of the Ruby Lounge in Manchester listing a Theatre Of Hate gig there, I don’t recall seeing a single poster or listing in the Liverpool area; and yes we were upstairs in what was previously called The Loft, at the recently refurbished and thriving East Village Arts Club – despite the poor advertising a keen crowd was present to welcome Theatre Of Hate onto the compact stage as they closed this all too brief six date ‘Slave’ tour to promote the EP of the same name, the EP featuring the first new TOH material since 1982.

The stage lights drop, as Inner Circle’s ‘Bad Boys’ soundtracks the bands arrival onto the compact stage – Brandon, dressed entirely in black is flanked by original TOH members Stan Stammers and John ‘Boy’ Lennard, both sporting Sexy Hooligans reproduction ‘Seditionaires’’ shirts, alongside current Spear Of Destiny guitarist Adrian Portas, and Buzzcocks drummer Danny Farrant; behind them hangs the iconic ‘face’ logo that adorned so many decorated leather jackets all those years ago…Brandon with a polite nod to both the crowd and Farrant the instantly recognisable drum refrain of ‘Westworld’ ignites the evening returning us to the early 80’s, and yet sounding so current – this is the beauty of Theatre Of Hate, the inventiveness of the song structures effortlessly demonstrating why so many of us saw TOH as figureheads; think back to the state of punk in those days, the creativity and diversity of bands like the Pistols, and X-Ray Spex had been lost to the almost parody of the likes of The Ejected and their ‘Have You Got 10p?’ EP, Brandon and his cohorts were at the forefront of the ‘positive punk’ movement, a feebly named music weekly creation that subsequently evolved into either post punk or gothic rock pending on your persuasion. Tonight ‘Westworld’ simmers with rumbling menace, an ominous darkness illuminated by Brandon’s operatic voice, before he guides us through ‘Propaganda’ the original reverse to the 1982 ‘Westworld’ single, a release that saw TOH enter the UK Top 40.

Sadly it’s unlikely that ‘Eyeless In Gaza’ will propel TOH anywhere near the charts, but hearing this live; the first new material in 32yrs was a moment to savour, Adrian Portas subtle guitar building over a simple brooding drum beat, Brandon with his frankly epic vocals sends shivers down the spine; before John ‘Boy’ Lennard injects a melancholic edge with a wandering sax refrain, Brandon is clutching the microphone, his hands tightly gripped, sinews strained, he clearly utterly believes in his band as he twists and snakes around the stand. ‘Eyeless In Gaza’ is brand new, yet its sits comfortably against ‘The Hop’ from 1982, this is because TOH were light years ahead of their then contemporaries, some of which are yet to make up even half the ground Brandon and Co. forged ahead through…’Triumph’ again lifted from the ‘Slave’ EP is perfectly titled, every component of classic Theatre Of Hate is present, the militaristic drum patterns, the jazz infused sax colours and the guitar melody leading us into a glorious massed vocal chorus – a clarion call that that had the crowd swaying, then punching the air in response, Slave garners equal reaction, the song is huge, almost panoramic in its expanse, Theatre Of Hate always understood the need to allow each instrument to speak, and ‘Slave’ shows they have not lost that ability. 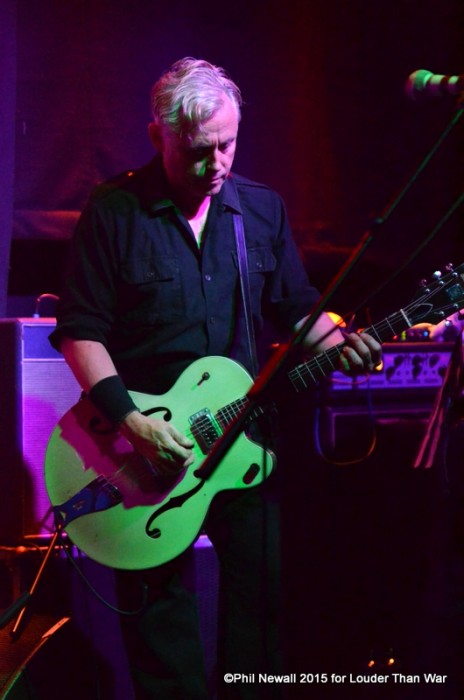 Theatre Of Hate were always tagged as moody, I think that was lazy journalism based on the bands chosen subject matter, Brandon contrary to this is in good spirits clearly enjoying these dates, he and Stammers joke about being back in Liverpool before launching into ‘Americanos’ the original bands swansong single, before introducing the anthemic ‘Rebel Without A Brain’, a shout from the crowd ask Brandon to explain the songs meaning; he breaks into a huge smile before replying that it was possibly autobiographical “I was 25 – there was no-one at home” – tracks like this define Theatre Of Hate, and these dates could have been merely a nostalgic trip but watching the passion with which each track is delivered dispels any such slur – Brandon is stood stock still centre stage, Stan Stammers and John ‘Boy’ Lennard pinball (gracefully – well they are now both 50+) behind him, during vocal breaks Brandon steps to the side of the stage as the music courses through him, he breaks into an almost involuntary dance all the while building to ‘Original Sin’ as Brandon shoulders a Gretsch guitar and confronting Adrian Portas, the crowd lift themselves recalling the mosh pits of years ago, there are only a couple of tracks left to return – everyone knows what’s coming so when the bass of ‘Nero’ rattles the venue walls the crowd are there with them, arms raised soaking up the moment, a moment that could only be topped by ‘Legion’ as Brandon hollers out “Join our church, rejoice, rejoice”

As the set concludes Brandon brings his band forward to accept the applause, before stating that he doesn’t know if and when Theatre Of Hate will play again; if you missed these six gigs you really need to wish that he revisits this period of his career again sometime soon.