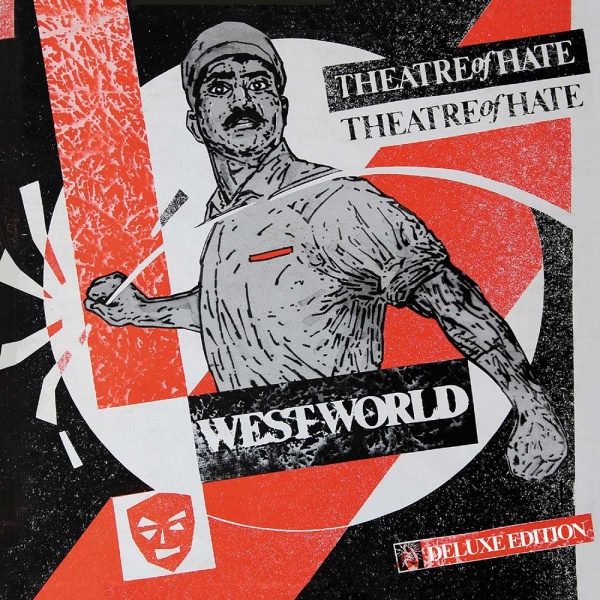 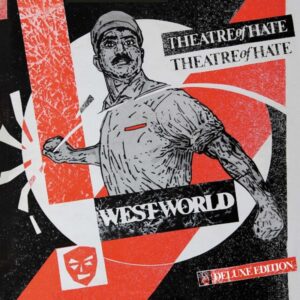 Theatre of Hate ’Westworld’ was originally released in 1982; a period when the initial flame of punk had been somewhat smothered, to be replaced with UK82 punk, the sound from the streets, a partial reaction to the alleged art school manifestations of the original punk protagonists. Bands like Discharge, GBH, Disorder, Abrasive Wheels and The Partisans were making headlines; nothing wrong with any of these bands, however there was an alternative; Theatre of Hate stemmed from the raw vitality of their previous incarnation The Pack, and married this with the post-punk influence of Joy Division and early gothic bands such as Bauhaus and Christian Death – the result being a dark, militaristic foreboding sound matched by equally doom ridden lyrics.

‘Westworld’ was produced by Mick Jones, who can be credited with providing the entire album with space, the tracks became more expansive as Theatre of Hate and Jones carefully wove the more upbeat danceable elements of their material with a melancholy atmosphere courtesy of the bands rhythm section and the stunning saxophone playing of John ‘Boy’ Lennard.

‘Westworld’ catapulted Theatre of Hate into the UK national album chart, peaking at No. 17, the accompanying single ‘Do You Believe In The Westworld’ saw the band make their only Top Of The Pops appearance, being introduced by long-time fan DJ John Peel – the single rapidly sold out of its initial 50K pressing, however Rough Trade Records, the label handling the manufacture and distribution got cold feet and declined to press anymore; as such the single dropped from the UK chart, only to be repressed by Stiff Records; however their chart moment had passed – despite this it’s generally accepted that the ‘Westworld’ single sold in the region of 150K copies.

Theatre of Hate continued to enjoy further success, Billy Duffy was brought in on guitar and a second live album ‘He Who Dares Wins: Live in berlin’ was released, a second studio album was proposed with sessions for ‘Aria of The Devil’ being recorded and then abandoned as the band fragmented.

Frontman Kirk Brandon re-emerged with Spear of Destiny who went on to huge UK, European and US success.

Fast forward to 1991 and Theatre of Hate briefly reformed, these on/off reformations have continued up to present day, now with a settled line-up and the ‘Kinshi’ album being released in October 2016, it’s fitting that Cherry Red Records have reissued the ‘Westworld’ album as a Deluxe edition, the original not being available on CD for many years.

What you get, neatly housed in a clamshell case are 3CD’s and an accompanying booklet authored by Mojo author Pat Gilbert, the booklet features interviews with Kirk Brandon, Stan Stammers, and John ‘Boy’ Lennard as well as rarely seen photographs.

Disc No. 1 is a re-mastered edition of ‘Westworld’ with 5 bonus tracks including the original accompanying 7” tracks ‘Propaganda’ plus the Ministry of Dub Version and re-recording of ‘Original Sin’. The re-mastering is, thankfully sympathetic, the album retains is urgency but benefits from greater depth and space for the tracks to breath to realise their full haunting potential, in particular the sax of John ‘Boy’ Lennard – credit to Brandon, even the quirks in his voice, as noted in ‘Freaks’ remain intact, this is not a glossing over job and as such benefits hugely. 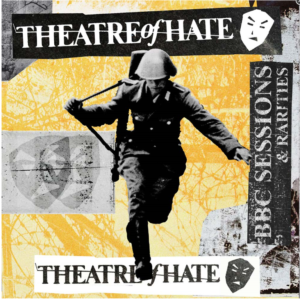 Disc No. 2 is an absolute gem for collectors; neatly gathering together previously unreleased tracks from the four sessions Theatre of Hate recorded for John Peel stretching back to December 1980 and their bands final session in August 1982 from which ‘The Klan’ is lifted; the opening track being a straight lift from the aforementioned Top Of The Pops performance of ‘Westworld’ complete with Peels famous comments about “surly Belgians” add to this five alternate mixes including ‘Judgement Hymn’, ‘The Klan’, The Wake, ‘Conquistador, and a weirdly engaging mix of ‘Original Sin’ – some of the remixes haven’t aged particularly well, the production instantly date marking the early 80’s when studio indulgence was a favourite of record companies.

Disc No. 3 features an entire live performance recorded in Vienna during 1982; its raw, it’s vital – again a few dips in sound have been retained; as such the recording perfectly encapsulates just how Theatre of Hate were at the forefront of post punk, the set is built around the ‘Westworld’ set but pulls in ‘Incinerator’ the flip of the 1981 ‘Nero’ 7” and ‘Dreams Of The Poppy’ (entitled ‘Poppies’) which at that point had only been released on a flexi-disc courtesy of Dutch magazine ‘Flexi’ 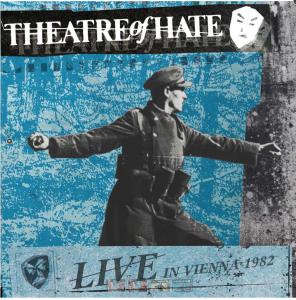 Theatre of Hate are one of those bands who for reasons best known to others have been gently pushed to side-lines of post punk history; this Deluxe legacy edition is long overdue and should, considering the brand-new album reignite people’s passion for the band.

‘Westworld’ was and remains a fantastic album, an album that pointed the way for others to follow; if there was any criticism it would be that there isn’t a vinyl edition; the booklet would benefit greatly from a full-size reproduction, but that’s a small complaint when you consider the music presented here.