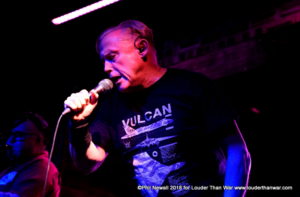 Kirk Brandon, a man who appears to live almost continuously on tour brought Theatre Of Hate to Wrexham on a cold and miserable evening to promote the new ‘Sensou’ release.

This four track EP matches two new tracks ‘The Swarm’ and ‘Roman Woman’ with re-recordings of both ‘Legion’ and tonight’s opener ‘The Klan’ a track that defined early Theatre of Hate’ own interpretation of what became post-punk; sadly the venue suffers from some of the poorest stage lighting of almost any in the UK, the band seem to be lit by two strips of Christmas lights providing little more than a neon pink wash; as such only Brandon’s blond hair can clearly be seen as he hunkers over his Gretsch guitar, to his left Stan Stammers provides those distinctive bass lines, the interplay between these long term comrades is subtle, and provides the core to Theatres Of Hate’ resurgence as demonstrated within ‘Black Irony’ from the 2016 ‘Kinshi’ album.

Despite the modest crowd Brandon’s delivery is impassioned, he sings with raw emotion, matched by the haunting saxophone of ‘The Swarm’ befitting the frank subject of the song, Adrian Portas snakes his way around the stage creating layers of spacious atmosphere to be filled by Brandon’s faintly operatic voice, a voice that shows absolutely no sign of diminishing.

‘Nero’ continues to burn with intensity, Brandon has dispensed with his guitar, arms flailing, punching the sky, the taut military drum, Stan is rhythmically traversing the stage… and again that sax rings – from the outset Theatre Of Hate sounded like no other, some 35+ years later that thankfully remains the claim, be it the looping almost disco bass of ‘The Wake’ or current ‘Façade’ , or ‘Slave’ – the targets have changed but delivery remains as forthright. 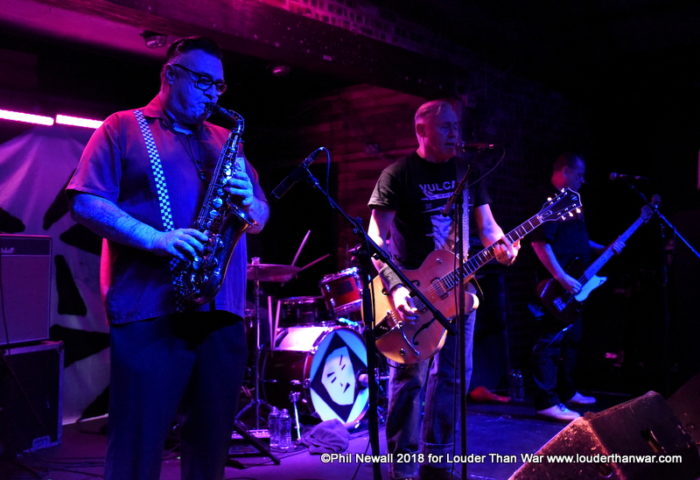 ‘Poppies’ merges into a rabble rousing ‘Incinerator’ then both ‘Original Sin’ and the ever expansive ‘Westworld’ see the audience finally begin to move, arms aloft choruses being sung as the decades are stripped away; they encore with the  angular anti-pop of ‘The Hop’, a huge sounding ‘Legion’ and ‘Propaganda’ entirely driven by Chris Bell hammering out that signature beat , and Stammer’s thrilling bass, building to the celebratory sing along.

‘Sensou’ is the first of 3 consecutive EP releases, available on a variety of formats inc limited edition purple vinyl; order from Kirk Brandon