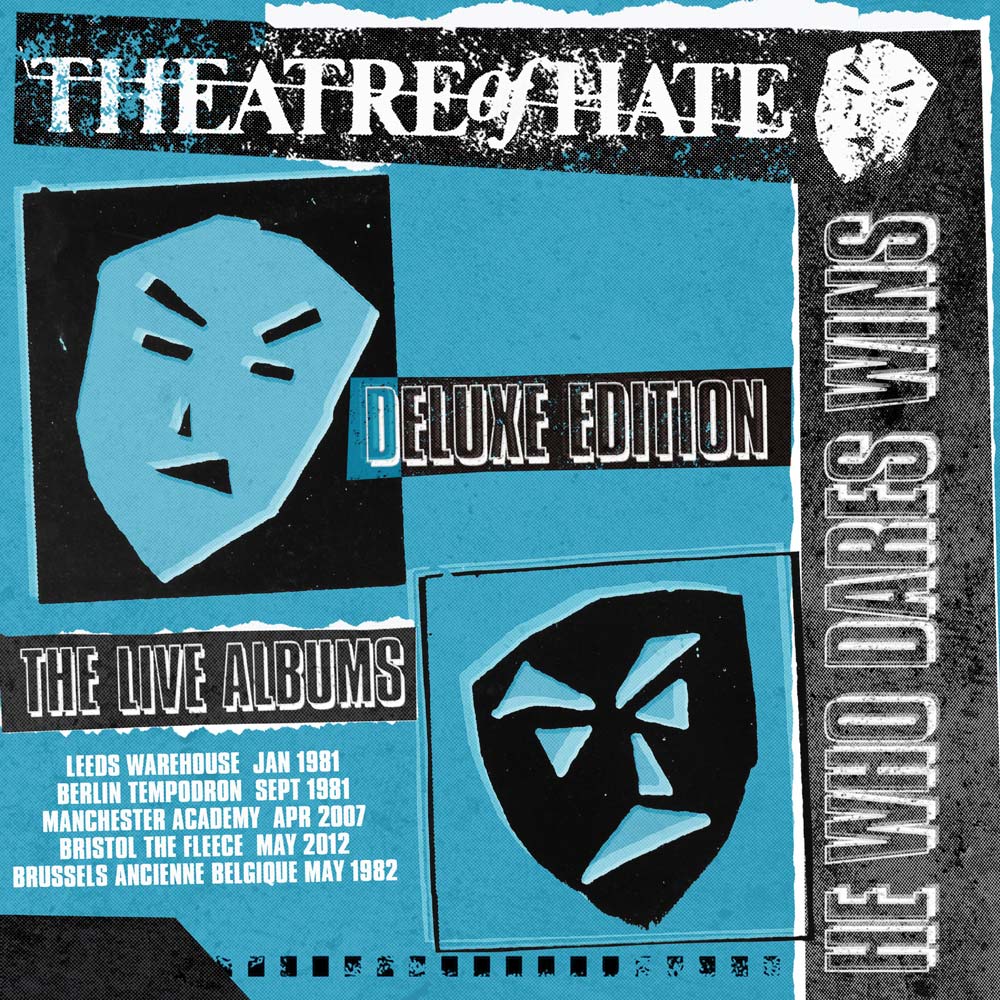 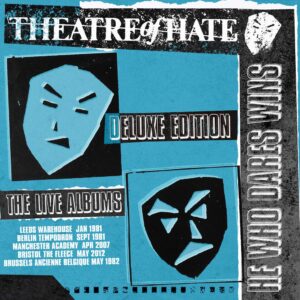 Following on from the ‘Westworld’ 3CD Deluxe edition back in November 2016, Cherry Red have now put together an intriguing 5CD package that should provide some clarity to frankly baffling number of live releases competing for shelf space under the Theatre of Hate banner.

Neatly housed, in a fast becoming label trademark clamshell box you get the two ‘He Who Dares Wins’ albums originally released in 1981; Volume 1 ‘Live at Leeds Warehouse’ was the first release from Theatre of Hate following the demise of The Pack who were responsible for a number of crucial releases, most notably ‘King of Kings’ (Rough Trade 1979), and the ‘Brave New Soldiers’ EP (SS Label 1979) which demonstrated that frontman Kirk Brandon was never going to be satisfied within the confines that punk had already become.

Both the ‘Leeds’ and Volume 2 ‘Live in Berlin’ albums are presented in reproduction original artwork slipcases, and benefit from complimentary remastering; ‘Leeds’ being a soundboard recording originally released on cassette after Brandon took advice from the then Clash swag-man Razor; Razor himself went on to form Burning Rome Records who were responsible for much of Theatre of Hates early output – this may explain why a newly formed band would release a live album ahead of even a single, then again, and much more recently Evil Blizzard released a remix album ahead of its source album, but I digress!

Theatre of Hate excelled on the road, endless touring had honed the band sound, they caught the attention of young punks already disillusioned with the cartoon punk being churned out by big labels disguised as DIY upstarts; Vol 1, and Vol 2 capture that new direction, both are rallying cries driven by the dark foreboding material that Brandon was crafting; ‘Leeds’ includes (as then) new tracks ‘Rebel Without a Brain’ and ‘Original Sin’, the remastering has added depth to the recordings, each instrument being given room to breathe – space being the key to Theatre of Hate’ unique sound; similarly with ‘Berlin’ though by now with the addition of Billy Duffy in the band the sound had become more atmospheric and benefited accordingly; the drum and bass have clout, the flattened sound of previous editions being removed, Brandon’s voice is strong and the crowd respond accordingly, this is a gem of a live recording, and showcases a band growing in confidence with each date under their belts, it’s a tight, heavy and energetic blast through the material that would appear on their first studio album ‘Westworld’ some six months later.

Disc No. 3 captures the bands 2007 reformation from a gig at Manchester Academy in April that year, the (very) short tour being assembled to mark the 25th anniversary of the ‘Westworld’ album. The band consisting of Brandon, John ‘Boy’ Lennard, Steve Guthrie, and Luke Rendle, only Stan Stammers was unavailable, apparently due to family commitments, he was replaced by Craig Adams, the tour was a reassertion of the impact of ‘Westworld’ and culminated in a triumphant hometown gig at the cavernous Islington Academy on the 29th April; the Manchester recording is not a straight live playback of ‘Westworld’ – ‘The New Trial of Tears’ ‘Freaks’, ‘Anniversary’ and sadly ‘The Klan’ were omitted from the show, though the Adams bass rattle during ‘Nero’, and ‘The Hop’ is a treat, we also get an early blast of ‘The Swarm’ which the audience were advised could be heard via Myspace, which is a neat unintended historical reference.

Fast forward to May 2012; Theatre of Hate, now consisting of Brandon, Stammers and Lennard, plus Adrian Portas (ex-NMA), and drummer Mike Kelly, gathered again for three ‘Westworld’ 30th anniversary gigs (Bristol, London and Crewe) – Disc No. 4 captured the gig from The Fleece, Bristol and once again demonstrates the measured power of Theatre of Hate, the sound is remarkably clear, Brandon’s voice has gained strength with age, he has, as you would expect learned to harness the power of his vocal range, this perfectly complements the guitar subtleties of ‘The Wake’ which is hauntingly powerful; as with the ‘Manchester’ album, the recording isn’t confined to ‘Westworld’ – ‘Rebel Without A Brain’ is huge, crashing drums, soaring vocals, whilst a frantic ‘Legion’ pummels you to the floor ahead of a mosh-pit baiting ‘Propaganda’ and a 6min ‘Westworld’ to conclude the night as Brandon graciously thanks all who attended before leaving the stage to the sounds of E. Elgar’s – Variations on an Original Theme for Orchestra “Enigma”, Op. 36

Disc No. 5 is billed as a Bonus Disc and draws from a 1982 gig at The Anciennes, Brussels; it’s never (legitimately) been released, and is a soundboard recording of the band as they took the ‘Westworld’ album to Europe following its release some 9weeks earlier.

If you were to listen to these albums in numerically correct order, then the Brussels one is a return to the raw, fresh sound Brandon was taking us towards, the recording peaks at a few points, but arguably benefits from it as it instantly takes you back to those heady days when bands like Theatre of Hate began to explore the possibilities that became post-punk, the set features ‘Black Madonna’ which only saw daylight on the posthumously released ‘Aria of the Devil’ after the band collapsed in 1983, the set also includes ‘Solution’ which effortlessly entered the Spear of Destiny set appearing on their 1983 debut ‘Grapes Of Wrath’ album.

The entire bundle comes with an accompanying 14pg booklet including photographs, and illustrations, plus sleeve notes compiled by Mojo’s Pat Gilbert that feature historic and recent interviews with band members – as such it’s a must have package, not only a historic reference point but a clear indicator as to how after 35yrs Theatre of Hate were able to return in 2016 with ‘Kinshi’.