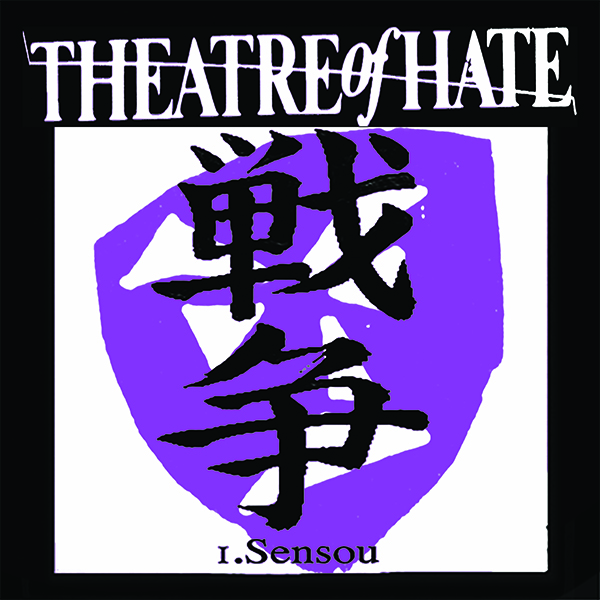 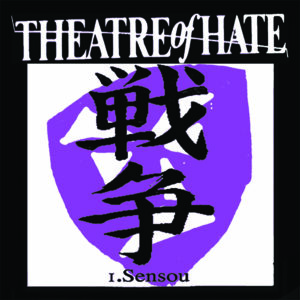 The intriguingly titled ‘1.Sensou’ is the first of three releases by Theatre Of Hate that will lead to a new studio album in 2019, ‘Sensou’ is the English translation of the Japanese word for ‘war’, and continues Theatre Of Hate’ link with Japanese culture, as evidenced on the cover of the 2016 ‘Kinshi’ album, an album that captured the resurgence of the band and took them into the national chart.

Each of the releases will feature two brand new songs and two re-recorded tracks drawn from the bands vast back catalogue, as such ‘1.Sensou’ opens with new track ‘The Swarm’- its stark drum refrain is bleak and intense before a melancholic jazz tinged saxophone from Clive Osbourn introduces Brandon’s distinct signature voice, the track is underpinned by a driving bass and some neat guitar, this coupled with excellent production allows every element of the track the space to develop into a brooding masterpiece that instantly references Theatre Of Hate of old yet signposts the bands future direction.

‘The Klan’ was always one of those tracks that almost defined Theatre Of Hate, the original was ambitious in its scope and grandeur, yet jarring from the stuttering opening, reliant on that drone guitar and heart rhythm bass; this new rerecording is more reminiscent of the bands live performance, is more traditional in its direction yet actually benefits from it, the taut militaristic drum drives the pace, perfectly complimented by a dark bass with flashes of colour from Adrian Portas’ guitar whilst Brandon’s voice hollering “who is this Klan, who are they” shows no sign of losing its chilling impact despite the intervening years.

‘Roman Woman’ is ridden with sadness; initially reliant upon just Brandon’s voice and Portas’ guitar, before a pensive sax lament dominates the piece, a laconically paced beguiling track, that adds texture to the overall release, which only leaves room for ‘Legion’ – a genre defining track originally released on the reverse of the ‘Original Sin’ 7” way back in 1980, ‘Legion’ has rightly remained a mainstay of the bands live set igniting mosh pits for a frightening 38yrs; this 2018 reworking loses none of the impact, that Sabbath ‘Paranoid’ riff being fully in evidence, the track is fully fleshed, its dirty, darker, and simply sounds bigger; the saxophone was always a moot point between followers back in the day; this version has it in abundance guiding Brandon to the familiar chant of “Let us help you make your choice, Join our church, rejoice, rejoice, Let us help you make your choice” ahead of that scream that implodes the track.

‘1. Sensou’ reaffirms not just the influence of a band such as Theatre of Hate, but also of the need for them right now; we are drowning in a slew of pop drivel, music written by demographics; Theatre of Hate, the perennial outsiders are still making music that really matters and this EP effortlessly demonstrates both their understanding of their craft, and that there is a whole lot more to come. 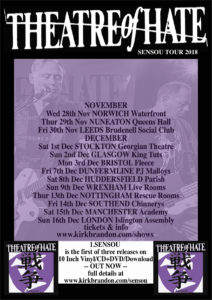 Theatre Of Hate commence the ‘Sensou’ UK tour on the 28th November, and continue right up to the 16th December when they play a the Islington Accademy, London.

Advance tickets for all shows are available from venues now.