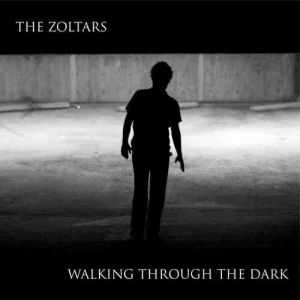 The Zoltars – Walking Through The Dark (CQ Records, Burger Records)
CD/LP/CS/DL
Out Now

Melancholic Austin outsiders The Zoltars return with a more fleshed out followup to 2012’s stunningly ghostly Should I Try Once More.

The Zoltars’ frontman sounds like the poor frail kid plagued with viruses and bone disorders that had to spend 9 months in an iron lung and missed every school field trip when he was growing up. His thin, reedy voice could also be the sound of a clinically depressed person on Prozac; there are anxieties aplenty, but they are just inhibited enough for him to remain a relatively calm, if still pretty disgruntled observer of ‘the world that he hates’. His backing music is suitably sparse and skeletal, recalling a German expressionist film full of suggestive shadows that don’t have to be explicitly detailed to deliver an impact, while the stark, monochromatic color palette of The Zoltars album covers likewise expertly echo the dark and lonely lamentations of their songs.

Their debut offering Should I Try Once More was almost devised as a sort of concept album which followed a sometimes very spooky and disturbing narrative about falling in and out of love and the painfully elusive quest for companionship. Some of the same themes crop up again on Walking Through The Dark, although it is a much more solitary and misanthropic journey, with Jared Zoltar pondering why he never goes outside (Here In My Room) and needing to go where no one else can hear what he has to say (I Walk Alone At Night). Despite this, it has a much denser and fuller sound, the percussion is livelier and the guitar playing more layered and robust. There is also a heavy addition of piano and cello on a number of tracks, creating an altogether bigger experience with a slicker and meatier studio presence. The band itself has now expanded to a four piece currently consisting of Jared Zoltar on vocals and rhythm guitar, Justin Main on lead guitar, Miranda Fisher on bass and Donald Gallaspy on drums.

Luckily, Jared’s drowsy and delicate voice somehow manages to float distinctly and clearly on top of these extra arrangements rather than being buried, and Walking Through The Dark does not feel overcrowded in any way. It is hushed and subdued in the right places, and galloping freely like a midnight ride on a velvety black horse in others. It is still an album that does not offer much light, apart from the gorgeous childlike whimsy of lead single Animal Dreams and the muted guitar strums and demure fluttering piano line of the playful Evelyn.

Don’t Want You To Go Away expresses Jeffrey Dahmer-esque apprehensions of insecurity and wanting to keep someone in a relationship, describing an idyllic but maybe ultimately unsustainable situation. It is that lingering dread of disappointment and of fantasies toxifying, wanting to preserve special moments indefinitely in a formaldehyde jar.

Naturally the highlights for me are also the most haunting and emotionally devastating album cuts (Fear Not Death and the title track Walking Through The Dark). Fear Not Death is both chilling and empowering, as Jared Zoltar wrestles nakedly with his own inescapable mortality, but relax; we’ll all get there one day… Appropriately enough, the song carries the same somber weight as if you were peering into your own cold, as yet empty grave, or dangling by a thread and gazing, gape-eyed, down a sheer drop that will eventually spell your own doom. It is full of repetitive piano plinking and spectral, wraith-like guitar dirges. Walking Through The Dark is a slow goodbye waltz all about atonement and letting go, a regretful admission of failure over more or less everything, and you get the feeling Jared Zoltar is being pretty hard on himself. You don’t want him to disappear into the dark by himself, but at the same time you know he doesn’t want any company and you just have to let him be.

In summation, Walking Through The Dark does not feel drastically different from it’s predecessor, it’s just more sturdily built and elaborate, showing off the growing ambitions and musical dexterity of The Zoltars. If, like me, you feel as if the world and everyone around you is constantly kicking you and you prefer to be alone a lot, you will have a close friend in this record.

The Zoltars are currently recording a new album with Orville Bateman Neeley III (OBN IIIs, Bad Sports). You can connect with them on Facebook or via their own website here.