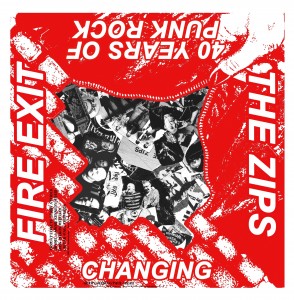 People elsewhere in the world might not be aware of it, but Glasgow was something of a punk hotbed just like Manchester and elsewhere back at the very beginning. With rabid fans, several record shops catering to the hordes and “secret” venues in Paisley and elsewhere (the then Glasgow Council had banned punk gigs) there was a scene that rivaled anywhere in the U.K.

Of course there were the bands; some were pub rockers that cut their hair, some were too crazed to ever last (stand up The Fun Four and The Backstabbers) and some never got further than the rehearsal room (The legendary A.P.G. being one…)

Two of the bands from that time, however, are still happily kicking and screaming and have released a celebratory joint single to honour both their longevity and the music that birthed them. Fire Exit need little introduction to anyone who’s ever been to Rebellion Festival; regulars and stand-outs for more years than they can probably remember, Gerry and Co’s wild shows and singalong anthems have probably put more smiles on hungover punk visages than Blackpool ice cream cones have been drunkenly dropped. Their first single, the mighty “Timewall” goes for silly money on the internet (albeit there’s been a re-release in recent years) in its original glory. It’s easily one of the best “lost” singles from the punk era, no doubt. In a time when single was king, “Timewall” was a real standout. With its energy, elan and blues-y swagger, it was going to always be difficult for the young band to better. The B-side is pretty good, too.

In typical circumstances, Fire Exit were courted by record companies, toured Europe, moved to London and imploded in grand style, leaving a legacy of that solid-gold single and some memorable gigs. They never really went away, however, and Gerry Attrick has kept the flame alive all these years with sporadic shows and those mental festival appearances. A few albums have been self-released (or on small indie labels) and they’ve kept the fire burning for Fire Exit.

The Zips also had a couple of singles back then that get record collectors hearts a-pounding; with interest from mainland Europe in their back catalogue, Jon McNeil (JonZip) pulled the band back together a few years back and they’ve been a unit again ever since. John Peel used to love ’em, too. Road dogs ever since the reformation, The Zips have been burning the miles across Europe and the US of bleedin’ A in what Strummer used to refer to as “The Quest”.

JonZip is Glasgow’s own Strummer; heart on sleeve, walk-it-like-you-talk-it and passion bleeding from the veins. A Zips gig is rarely dull; Jon’s artery-bursting yelp and the band’s foot-on-the-monitors righteous, raucous testifying are a vision to behold and to ahem, be-hear…

This release has apparently been beset by troubles since both bands conceived it; a pressing plant closed prior to delivery and a track was re-recorded by The Zips amongst other disasters. No matter; it’s here now and was worth the wait.

The Zips open with “40 Years of Punk Rock” which puts down a fearsome marker. Fred X slices at his guitar as the drums and bass sinuously wind round JonZip’s wily vocal.

It’s a song about punk. So what. It’s a cracking song about punk and why we all love it all of these years later. The recollection of the adrenaline rush and the danger of those long-gone years is encapsulated into three minutes of finger-blistering action.

The Zips also have included a live song recorded at The Venue in London from 1979. A different line-up, for sure, but with all of the grit and gusto always associated with The Zips seeping through the grooves. Cracking guitar solo, too. It’s called “Don’t Be Pushed Around” and I like it a lot.

Fire Exit lay down the law with “Changing” which reminds me how much of an Alex Harvey influence there is in the voice of Mr. Attrick. Age hasn’t dimmed him and the lungs are certainly still in working order! The harmonica player (Charlie Moffat) that Fire Exit have added to their line-up has added a stirring new dimension to their typical good-time punk rock; that blues vibe was never far away and it’s evident here quite clearly.

Their other song, “”Hey, Hey, Are You Ready To Go” is clearly another live favourite with its singalong, good-time vibe. Fire Exit stick to what they know and do it damn well.

Both bands are confirmed for Rebellion 2017 and are not to be missed.

The single is available from both bands via their Facebook and web pages in limited numbers.