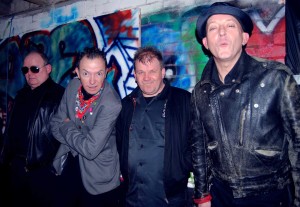 Glasgow based punks The Zips will be familiar to many from their appearances at Rebellion Festival and support slots to the likes of UK Subs, The Lurkers and 999. They’ve just released 19 Forevva,  the title track and third single from their second album. With lyrics that probably sum up how many of us feel, this sing-along classic evokes the carefree attitude of the eternal teenager trapped in an aging body.

Formed originally in the heyday of punk, The Zips released their debut single, The Zips EP, in 1979 and received extensive coverage on the John Peel show. However disillusionment with the early eighties music scene saw them split only to finally reform a few years ago due to growing interest in the band and demand for their early work. Their debut album, Guitars For Hire, was finally released in 2006 and was followed up in 2011 by 19 Forevva.

Full of stomping guitar anthems, 19 Forevva is a classic slice of pure punk. Kicking off with the blazing chords of Kiddin’ the album races along with all the energy that was surely displayed by the band in their original incarnation. The album also features a great anti war trio of songs; Angerland, Stop The War and (Straight To) Helmand which certainly nail the point.

Also of interest will be Hooray Henry which is aimed at fashion designer Henry Holland as a result of a T shirt design which is apparently similar to The Zips EP art work.

The Zips have also released a download only single in tribute to Joe Strummer, take a look below.

All words by Dave Jennings. Find more writing by Dave at his Louder Than War author profile.