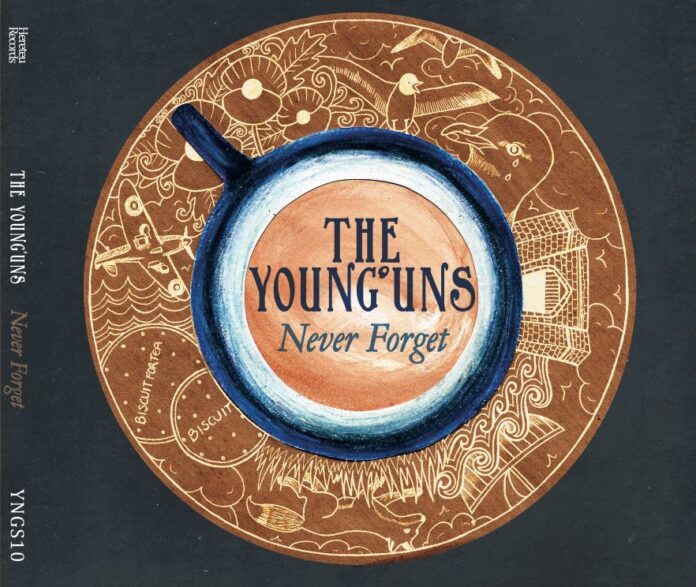 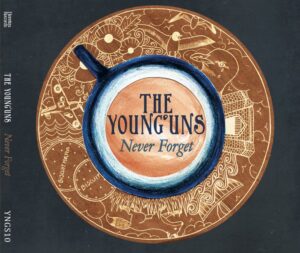 The Young’Uns have been in and around the folk scene for around ten years now. Coming out of the folk clubs of Stockton, the band have honed their craft over the years by relentlessly touring and impressing many a crowd at their own gigs and at the wealth of folk festivals across the nation.

Never Forget (not a nod to Take That) opens with Biscuits of Bull Lane. The track pays homage to the stand that a mosque in York took after the tragic murder of Lee Rigby last year. They offered members of the EDL cups of tea and biscuits to appease their desire to take out their anger on a mosque. The song also references other encounters with fascism that Britain has faced. Although the lyrical content may seem heavy, the track bounces along with a post ’67 Beatles style with brass forming the main part of the track along with the signature harmonies that the band have become known for. Many of the tracks on the album that contain instrumentation are flanked by piano or accordion from David Eagle and/or delicate acoustic guitar work from Michael Hughes.

In addition to the tracks with lush instrumentation, the Young’Uns have made their name by displaying their talent for sumptuous harmonies and raucous shanties. With that in mind, there are several instances where they let loose. The Graeme Miles penned Jack Ironside (about the building of Middlesborough) is given an extra verse by the band to bring it up to date. Another example of the bands vocal prowess is on the rip roaring Blood Red Shoes/Shallow Brown. The two tracks are sea shanties merged together which help show The Young’Uns ability to raise the volume using only their voices.

As well as a nod to Graeme Miles, there is also a tip of the hat to another great songwriter from the North East by the name of Jez Lowe. Again, the theme is that of anti-fascism in Hands Feet. The song was written as part of the Folk Against Facism movement which came about from the BNP’s plea to members to immerse themselves in the folk scene. The track features a fantastic contribution from a local Manchester school to help make the point of the song in that our children should not have to deal with such backward views in our country.

Although the band relies heavily on the traditions of their origins, in Sean Cooney, The Young’Uns have one of the finest young song writers in their ranks. Of the songs he wrote, The Long Way Home is a beautiful, tender love song set in various parts of the country. Altar is a piano led, melancholy song inspired by the imagery and legends of the Christian church. Three Sailors is an all vocal contribution dedicated to three unknown sailors of World War Two. The Sandwell Gate is another all vocal workout depicting images of medieval Hartlepool. All of these songs are great examples of Cooney’s writing talent, however, the albums centrepiece is John Hill; a personal story of a soldier who was related to Cooney and died in the Great War of 1914-18. The track bubbles and bubbles before soaring high and reminding people to ‘never forget.’ More brass is employed, alongside joyous piano and guitar. On the hundredth anniversary of the Great War, this song is an apt closer and the message rings true; Lest We Forget.

Although this is the last track on the album, there is a bonus track penned by David Eagle giving his take on the EDL events at the mosque in York. To say it is a far cry from the albums opener would be an understatement. It is a humorous eat at the end of a magnificent album.

The Young’Uns continue to grow as a force on the folk scene. With 2014 stacked with live dates, the band will no doubt continue to entertain crowds up and down the nation, as well as being curators of their own Headlands Folk Festival in April. If you get chance to catch the band live, do not hesitate, you will have an excellent night.

Details about Headlands Folk Festival can be found here.