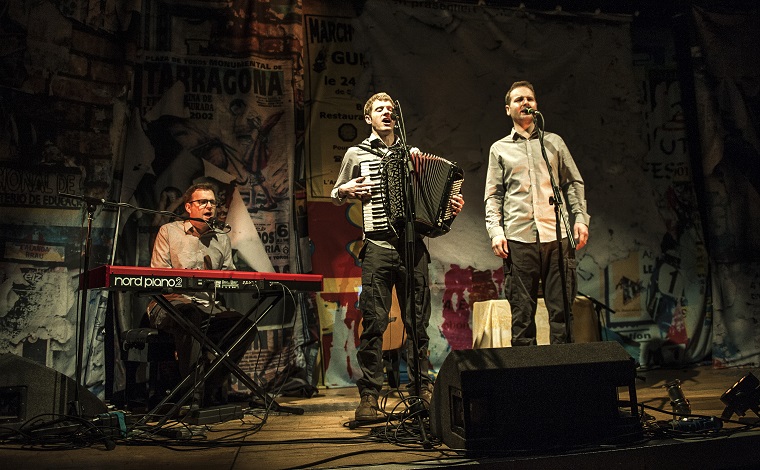 Ahead of their performance at Manchester’s Band On The Wall (reviewed here) Louder Than War caught up with 2/3rds of The Young’Uns (Michael Hughes and David Eagle) and their production crew (lighting designer Emma Thompson and set designer, the man known as Cally) to talk about The Ballad Of Johnny Longstaff, Strangers, being BBC Folk Band of the Year in 2015 and 2016 and what the future holds.

LTW: In the light of being previous winners of Best group at the Folk Awards, his year you have deserved to be nominated for everything that you have done with Strangers, The Transports and this show (Johnny Longstaff). Was it winning those awards that gave you the push?

Dave: It’s an amalgamation of everything. It’s difficult to say what it is. All the constituent parts came together. Being played on Radio 2, supporting The Unthanks, being on Radio 3, Stuart Maconie writing about us in the Waitrose magazine! (and namechecking the support from Louder Than war to boot), Guardian. It all came together, and that elevated us to the next level.

LTW: Do you enjoy it all? All the accolades and awards?

Dave: Oh yes. It’s good to think, and know, that you’re progressing as a band. You can do that musically, and the more people come to your gigs who say they heard of use through the folk awards, or on a Spotify playlist, or on Radio 3, or via a video that Billy Bragg shared.

Michael: The Guardian featured us a few times. It felt like a nod from them because a lot of the writers hadn’t seen us or heard us and opened up quite a few more different doors for us.

Dave: You get a whole new audience who have read about you, or heard about you in different places. Obviously the Folk Awards helped but they haven’t been the only thing.

LTW: Sean (Cooney) is in a rich vein of form at the minute when it comes to song writing. He seems almost as prolific as Dylan was in the early 60’s!

Michael: On the back of the Strangers record in which he wrote nine out of the ten songs, and when we were presented with the opportunity to do the Ballad of Johnny Longstaff, it was a completely blank canvas. We started talking about in October after the Strangers tour and he’s written 16 songs between November and now.

Dave: It wasn’t something that was given to us as a piece. We met the son of Johnny Longstaff and he said you need to write a song about my dad! He sent us a piece of paper with the story on which showed that he had marched in the hunger marches for a job when he was 15, he was at the battle of Cable Street, he thought in the Spanish Civil War against Franco’s fascists. He fought in the Second World War and all before he was 20. 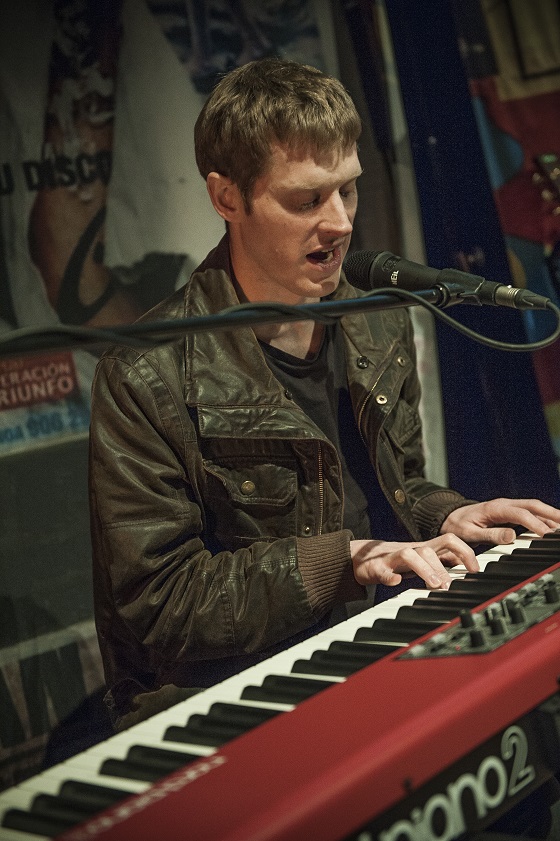 Michael: This was just a guy that came to a gig and approached us. We’d never met him before.

Dave: Sean was so inspired that he wrote a song about it, and one led to two. Cable Street and Bob Cooney’s Miracle are on Strangers, and then the opportunity came up to do the show which Michael decided we were doing it in March (!) so Sean ended up writing what would be 13 original new songs. He did it, and it’s incredible.

LTW: So Cable Street and Bob Cooney’s Miracle feature in the show?

LTW: How does it evolve then? You had the conversation about Johnny, and suddenly it’s developed into a full media show that is unlike anything you’ve done before?

Dave: There are five and half hours of recordings from the Imperial War Museum that Johnny had recorded in 1986. They’re all online. All the songs are based on his own words and the words of other people. There was so much. How do we present it? Should we do a song and then Johnny talking? We weren’t sure. We brought in the visual accompaniment so it wasn’t just us explaining the events and singing songs. That would work, but it was better to make it into a full show.

Michael: Sean just threw himself into this world of Johnny Longstaff. He read everything and completely immersed himself in it. When he writes a song he wants to know everything about that particular subject. That’s how the Strangers album worked so well. He read all the associated articles. He was reading in-between sound checks and constantly be learning about the subjects to write the songs. We went to Canada in November and we had 4 songs. He’s put the songs together very quickly.

LTW: At what point did you decide to get other people involved to do lighting and stage setups? Being involved in The Transports that was a theatre type piece, did that help?

Michael: The Transports had a very clear brief from the start; we were singers, not actors. So what we can do is that we can use props and lighting to set the scene, but we weren’t acting. For this one, Sean had the songs, we had Johnny’s voice, and Cally designed the backdrops and along with Emma and Joel, they all helped us put it together with the lighting. It was quite different to The Transports.

LTW: Does it feel like a well-oiled show now?

Michael: I guess you’ll see tonight! We’re ten shows in and have about eight left.

Dave: The last show was flawless! As well as Sean writing these songs, we had to learn the songs and Michael decided to go on his honeymoon two weeks before the production!

Michael: My wife was testing me on the songs on my honeymoon!

LTW: There has been one particularly fiendish track that is very quick!

Dave: Ironically, that song is one that we haven’t had any problems with. The pressure is always on me as I have the last verse and Sean and Michael are always cocky that they’ve finished their verses!

LTW: Are you going to release it as an album?

Michael: That’s the plan. It’s an amazing show and story.

Dave: It’s a completely different thing to perform too. We did a show in New Galloway, it was only a small room that you could fit 80 people in and the audience are right on top of you. It’s wonderful because you can hear everything in the crowd and their responses to Johnny’s voice; gasping, laughing, sniffling in sadness; it’s great as you’re usually fully into the songs but with the use of Johnny’s words, we can appreciate all those responses from the audiences. 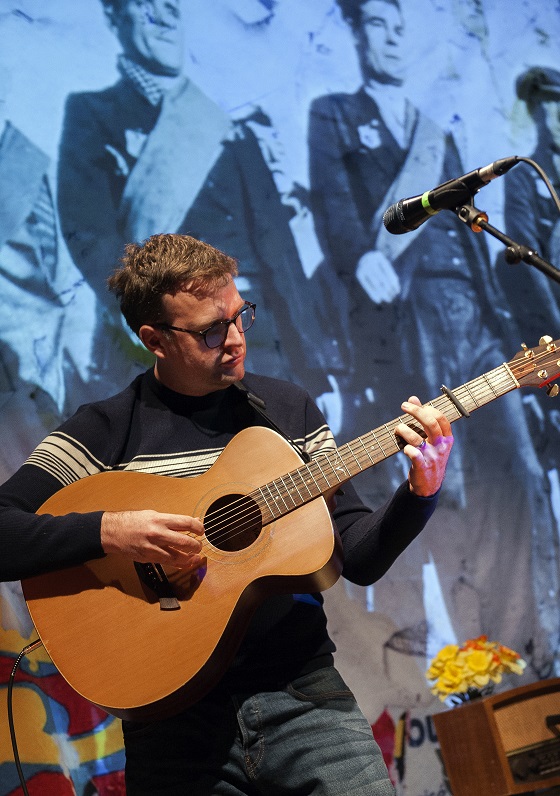 LTW: Was there any reason as to why you did the show before recording/releasing it?

Dave: The songs had only just been written and we wouldn’t have had time to get it all in. Plus, with Strangers, we played the songs for around a year before recording them so they got better, and we improved them.

LTW: That’s clear to see in Strangers and how good it sounds.

Michael: You can never tell how people will react either. People aren’t too sure of what they’re getting at this show. They’re a bit cautious. When I go on at the start, some people cheer, but some people are in complete silence. It brings about different reactions.

Michael: it’s nice to be nominated and we hope we win, but who knows?

The band ended up taking home the award for best album, as voted for by listeners to Radio 2.

LTW: Cally/Emma – What is your input and how have you worked with The Young’Uns on this project?

Emma: Cally was involved more than me. We had the script and gradually worked out the show when we were together. My background is in theatre so I’m used to working with stage directions. For this, it was more about getting them in the space onstage and seeing where it went.

Cally: I’d say the lighting is integral. There is a lot of focus on the band, Johnny Longstaff’s voice and focus on the narration and visuals. The lighting takes your attention to the place it needs to go to. That’s the intention. The lighting is the set and the set is the lighting. People need to concentrate on this show and the lighting that we use hopefully helps that concentration. We dumped the drum solo early on! Context is everything. We have a programme for everyone in the form of a newspaper and in some cases people are still reading when the band come on!

Many thanks to The Young’Uns, Emma, Cally and soundman Joel for their time in accomodating us; the show was amazing, and The Young’Uns deserve every accolade they get as they are an outstanding group that is genuinely one of  the leading lights in British folk music.