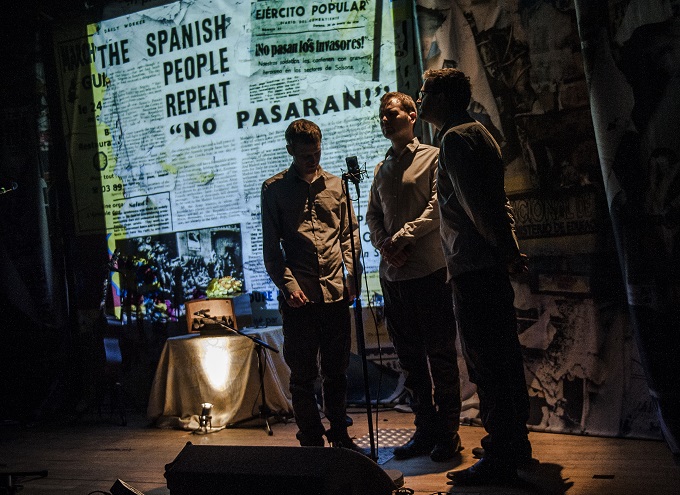 THE YOUNG’UNS – THE BALLAD OF JOHNNY LONGSTAFF

On the eve of their latest triumph with their album Strangers, reviewed here and set to pick up the prestigious and perhaps most meaningful as it’s the one open to a public vote) Radio 2 Folk Award for Best Album, The Young’uns have forged ahead with their latest work. A multimedia show based round 16 original songs and delivered in their trademark fashion that tell the tale of Johnny Longstaff. Johnny who? Read on…

The trio are in a truly rich vein of form that sees them building on their 2015 and 2016 Best Group Folk Award recognition and something of a surprise that the powers that be have neglected to recognise the fact for 2018. They are genuinely becoming the group that they were born to be – some may speculate they’re  twice the ‘best group’ they were two years ago judging on recent form.

The Ballad Of Johnny Longstaff has seen them build on two songs –  Cable Street and Bob Cooney’s Miracle – that appeared on Strangers. A Stockton lad who at the age of 16 had begun his stance against Facism, marched to London to find work and fought for a better world in both the Spanish Civil War and World War 2. It’s a fascinating story, instigated by Johnny’s son who saw the band at a gig and  brought to life in song, words, visuals  and the protagonists own voice, all crafted and woven into a narrative that embraces  humour, passion and sentiment.

Sean Cooney has spent time devouring everything related to the subject at every opportunity and the songs have poured back out of him like an unstoppable force. It’s the sort of outpouring that one of his own heroes, Bob Dylan found in the early sixties when his albums of what proved to be groundbreaking songs were effortlessly rolling out.  Not that Sean Cooney would ever compare his narrative skills in telling a story in song with Dylan’s poetic masterpieces, but we live in different times where the skill of fashioning and passing on stories  in the folk tradition is an art instrumental in keeping history and culture alive.

So, armed with a carefully pieced together set and lighting designed to guide the attention along with appropriate images and snippets of Johhny’s own words from the Imperial War Museum archive woven into the narrative of which the songs are the core, the trio crept onstage decked out in uniforms of grey shirts and cargo pants, switched off the radiogram, the scene set by  Sean Cooney with the now famous encounter between Longstaff and Winston Churchill and Johnny’s key words, “I’ve been fighting Hitler all my life.”  It was time to put down the souvenir newspaper (Advance! – a spoof on the No Pasaran! You shall not pass anti Fascist rallying cry) and get comfortable in a packed house.

What followed was an enthralling, passionate, moving and occasionally hilarious account of Johnny Longstaff’s part in the fight for freedom and equality as a son of Albion. Mainly sung in first person to link with Johnny’s own words. The Young’uns trademark three way choral and harmonies occasionally coloured with piano, guitar and accordion took us from the 1930’s hunger matches (Carrying The Coffin sung to the melody of John Brown’s Body) and the determined and defiant calls of “we will work once more” and into a rapid fire and impressively worked piece with the “waiting for a better day” refrain. As Johnny observed, a period of political change with the rise of Fascism juxtaposed with the plight of the thirties refugees, the familiar Cable Street now placed in context and taking up a new meaning.

The determination of our protagonist as he wangles his way into the Spanish Civil War despite warnings in Robson’s Song about his “arse bleeding from scratching lice” and the thought of his 26 inch wide bottom trousers injected the signature element of humour. Significantly placed against the sublime Ta-ra To Tooting was a masterstroke, the emotional balance swinging wildly as a classic Sean Cooney song and the visual of Longstaff and his pals (Jim and Jack and Ernie, Norman, Les and me – “I wonder how we ever were so young”) posed in their finery providing a, perhaps the, key moment of poignancy. Then sequenced into a David Eagle musical hall interlude involving thorough medicals in Paris and ladies in the nuddie (hence the Noddy song title) and unfamiliar trouser stirrings emphasising the roller coaster ride of the narrative. 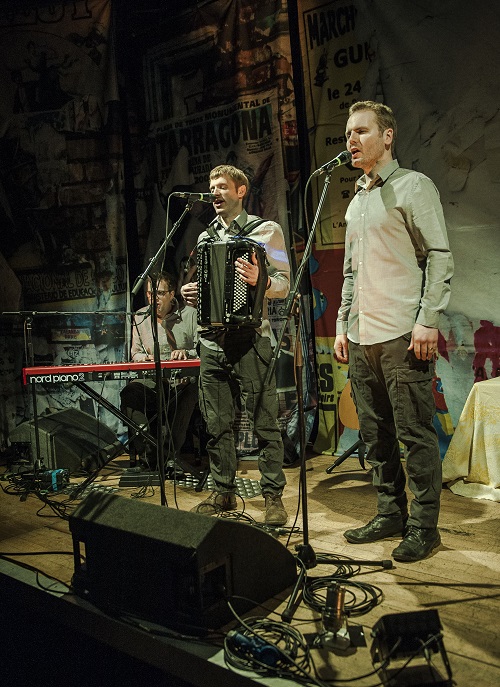 As the story continues into Spain, the Mediterranean flavour of Ay Carmela and its reprises was only missing the castanets and a tad of flamenco – a line has to be drawn somewhere. A first encounter with paella and another Eagle interval involved a wonderful rhyme of ‘paella’ and ‘sickly fella’, a diet of just oranges and the classic line of “spending six days on the bog” sung with appropriate gusto and bore no relation (or maybe just a clever in joke) that the first line of the next song, No Hay Pan, began “there’s a rumble in the street”. After abandoning their north east brogues for a spot of Cockney in Trench Tales, we became familiar with the first of a couple of splendid characters in the heroic Lewis Clive who “couldn’t wait to be alive”; inspirational and dashing, and full of valiant deeds, like the similar character of David Guest, his fate was not to return from Spain. Sung at the piano by David Eagle, ultimately sad in the waste of such a vibrant life yet strangely uplifting.

Was it all worth it? The notion of a firm answer of “yes” justified by what Johhny and his comrades saw as how they saw what could be done to overcome Facsim and Johnny’s words on the return to Spain and singing his own part in The Valley Of Jarama, voice cracking, that rounded off a landmark performance more than worthy of the standing ovations it will achievee on tour.

The Young’uns certainly raised the bar with Strangers. Their swift return with The Ballad of Johnny Longstaff however is simply the best thing they’ve done. In sporting terms, the bar hasn’t just been nudged that bit higher; they’ve done what Bob Beamon did with the long jump record in Mexico in 1968 and set the mark a long way out there, it will surely take something special to surpass.