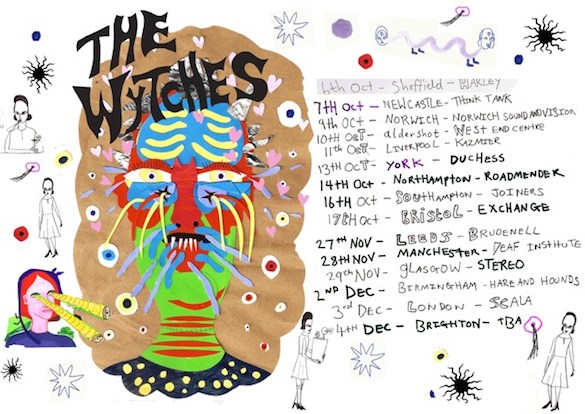 The Wytches released their hotly anticipated debut album, Annabel Dream Reader, through Heavenly Recordings last Monday. To celebrate the launch, and as an amuse bouche to a whole bunch on live dates kicking off 6th Oct (see poster above), the band spent last week playing a few in-stores around the country which included a show at London’s Rough Trade store. Louder Than War sent Josh Cooper along – check out his review below.

I’ve been following Brighton based psych rockers The Wytches for a little over a year now, the first time I saw them was last November supporting Future of the Left. It was an odd combination – teaming them up with the riff heavy, politically shouty, violently left wing punk legends, and it was quite obvious they were there because they were a “buzz band”. I, however, loved it. And since then every review I’ve read and conversation I’ve had has referred to The Wytches as a “buzz band”. I could even be quoted saying on Louder than War itself “they are the only one’s worth the hype”. If there’s one thing to be taken away from last night’s Rough Trade In Store, it’s that The Wytches are no longer a “buzz band” but rather that they have in fact been elevated to the level of “band”. They’re a band now, and it couldn’t have come sooner lest they get whisked away and lost in the ether of all those other three second fads.

As soon as I arrived at Rough Trade East it was obvious I’d wildly underestimated the importance of the event. I’ve been to in-stores before and they’ve always had an average turn out, but this time there was a queue of excitable fans half way down Brick Lane. Not only that, but all the familiar faces of rival bands and industry types you tend to see at these things.

Despite delays at the pressing plant meaning it’ll be weeks before we finally have the vinyl in our sticky fingers, pre-orders of one of the year’s most eagerly anticipated debuts still got you entry to the show and it wasn’t long before the place was full and apprehension was high. The trio stepped on to the stage quickly followed by a wall of feedback crashing into the slow, pounding riffs of ‘Burn Out The Bruise’.

The sound was just perfect, the vocals were crystal clear and the guitar shimmered beautifully, reverb soaked surf riffs gliding in and out seamlessly. It wasn’t, however, the Kristian Bell show – the rhythm section kept it tight and impressed us with energetic performances, locked tight. There was a lot of communication on stage but almost none to the audience, the set was effortlessly sped through with no delays. This might have something to do with the fact that they’d played three shows that day including a BBC6 session, at one point they even apologised for “not going all out”. But the crowd didn’t seem to care, the rocker’s moshed, the dancers danced, the dads held up their ipads and the rival bands looked on with envious eyes.

‘Gravedweller’ backed with ‘Wire frame mattress’ certainly proved the highlight of the show and as quickly as it had all started the show screamed to a halt, ending with ‘Crying Clown’ followed by yet more feedback intertwined with a Sabbath worthy outro. It was an almost tired ending but then this band have been working tirelessly, and the tightness shines through with every performance in almost direct contrast to their dreamy, chaotic sound.

The new album has landed, they’ve hundreds of upcoming dates including an extensive tour of the US and a homecoming show at the Scala in December. The Wytches have become a full-blown success story, let’s hope that story continues and they’re not over-exposed, over-worked and swallowed by an industry obsessed with the “buzz”.

Grab a copy of The Wytches new album here via Heavenly Records website.