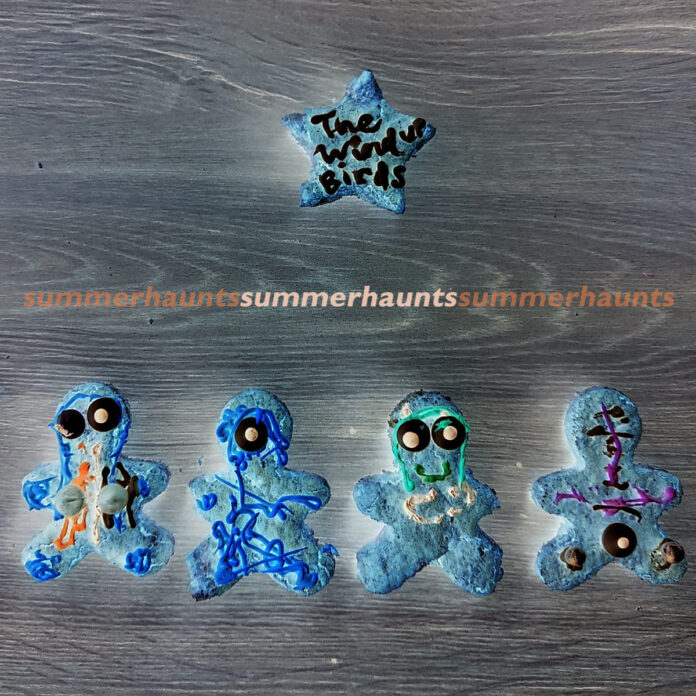 The Wind-up Birds might just be Yorkshires best kept musical secret. The longstanding and perpetually underexposed band return with another album of fiercely intelligent post-punk. Andy Brown cancels his trip to Specsavers in Barnard Castle and explores Summer Haunts for Louder Than War.

Looking for something to do while we slide through the increasingly confusing stages of lockdown and national crisis? Thankfully, the new album by The Wind-up Birds – Summer Haunts – is here to fill the void with a much needed blast of spikey, post-punk urgency. It might even help you stay alert. Whatever that means. I first heard the Leeds-based indie agitators back in 2010, their blistering debut single Tyre Fire managing to completely knock-me-for-six. A potent blend of punk-indebted indie and razor-sharp lyrical insights courtesy of singer, Paul ‘Kroyd’ Ackroyd. Summer Haunts follows on from 2018’s superb Desire Paths album and finds the band on reassuringly vital form.

The album was recorded last year yet the themes of isolation and strange summers feel entirely apt for 2020. Occasionally Kroyd has a bit of a Mystic Meg moment, as on the albums lead single The Yoke, “What hand sanitizer do you choose? I don’t know, I guess the one that smells most like booze”. The songs explorations into corporate data harvesting, however, would have felt on-point any time over the last decade or so, “Give three secrets about the worst part of yourself/ we will never do anything with that info on your health”. If you want straightforward lyrics about dancefloors or boozy nights out with ‘the lads’ then you’ll have to look elsewhere. Anxious summers inside, bad dreams, politics and the occasional crocodile are sewn together over a sad, angry and brilliantly engaging 35 minutes.

Things kick-off with the post-punk pop of Glass Head Circles; wiry guitars and nimble rhythms rattle along as Kroyd gives us a front row seat for a particularly bizarre recurring dream. “Glass head circles on a table in a sealed room” goes the catchy yet undeniably unnerving chorus. The explosive, idiosyncratic and uncluttered approach testament to the band’s years together. Ben Dawson’s dark, muddy bassline leads the way with Improvising; a sinister tale of bad comedy, rotten fruit, prayers for rain and uncomfortably sticky summers. Summer comes up again-and-again throughout the album, yet it’s used to create a blurry, claustrophobic atmosphere. Not quite The Lovin’ Spoonful. The nostalgic Great Sporting Fuck Ups comes next, with Kroyd scouring charity shops and online for some great long-lost VHS. An unexpectedly melancholic glimpse into wasted days where, “The jokes were poor and the laughter was canned”. Nostalgia is rarely straightforward or rose-tinted on Summer Haunts yet there’s something oddly comforting here. And I don’t even like sport.

The Yoke is followed by the raging, vomit-speckled catharsis of Teeth. “Don’t drink your beer and shout it out with the blokey men” warns Kroyd “Cos it isn’t for you and it isn’t for them”. It feels like the band are right there in your front room; Mat Forrest’s impressively noisy guitar crescendos and Oli Jefferson’s ever-limber drums keeping things wonderfully unpredictable. Rolling in on the back of an insistent keyboard groove, Croc-boy Ate The Sun perfectly captures the bands humour and intensity. A ridiculously fun three-minute blast of madness inspired by an obscure Russian kid’s book. Who else is doing stuff like this?! The frenzied Water Boarding and its tale of “Dead, old, bitter England” is followed by the heart-racing, emotional rush of Ignore The Summer. The latter bristles with bad memories yet find’s our protagonist cautiously considering venturing out into the blistering summer sun. There are no easy victories on Summer Haunts though; the tense Skin Scaffolding reminding us that things aren’t necessarily, “going to be alright”.

The superb All The Gate Kickers comes next and might just be one of the finest tracks here. Kroyd painting a picture of idiots in private clubs, neutered revolutionary types (“all out roller-skating”) and misplaced faith over a brilliantly hypnotic, Pavement-esque tune. Characters and shady situations bleed into one another as the song bounces along with nonchalant, slacker-rock charm. “She switched off the tracking on her phone because she didn’t want locating” goes one section “the agency said what did you expect? / what a daft thing to put your fate in”. The brooding and atmospheric drama of Local Dimming sets out to find the “feel good ending” before closing the album with an ominous, 1984-worthy chant, “we laughed at the past/ we ignored the present/ we pretended that the future was here”.

Summer Haunts is a satisfying, substantial and wonderfully realised album; every second seems to count. It might sound like a cliché but it’s the kind of album where you find something new every time you listen. The Wind-up Birds aren’t here to give you saccharine smiles and easy answers; instead offering up a playful, intelligent and engaging album that gives you plenty to think about. What kind of behaviour makes you scream and shout? What kind of love would you stick a padlock on a bridge about? When did you last check the pressure on your tyres? When did you last check the strength of your desires?

Buy the album on Bandcamp here