Home Best of the Web The Who FAQ by Mike Segretto: Book Review 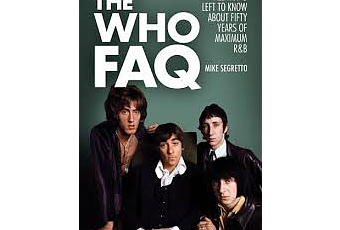 The Who FAQ – Mike Segretto

Great new in-depth study of career of The Who.  Louder Than War’s Dave Jennings reviews.

The subtitle of Mike Segretto’s comprehensive study, “All that’s left to know about 50 years of maximum R and B’, is particularly apt for this latest instalment in the FAQ series as no stone is left unturned in chronicling every aspect of the career of the legend that is The Who. This is a thorough account which is also easy to navigate for those who wish to enhance a casual interest, and may well offer some nuggets for the more dedicated Who fan.

The background of each member who has ever played with the group is presented, but it is the famous four who will be of most interest. Segretto makes a point of emphasising the importance of Roger Daltrey, ‘the rock’, to the band. A charismatic frontman and many would see as an essential component to the line-up, but Daltrey was also the odd man out in the band in the ‘60’s and came close to losing his place due to his violent temper. It was apparently his desperation to remain in the band that led to him changing his ways. Keith Moon’s school report ironically saw music as one of the very few subjects that had positives to say about him but ironically warned that he should ‘guard against the temptation to show off’. The excess loving, but quiet man, John Entwistle was a supremely gifted bassist while Pete Townshend is described as a genius who changed the way that guitarists played. The brief character sketches leave little wonder that these four disparate but talented individuals should weld together into such a force of modern music.

However, Segretto makes the valid point that, for such a big band, The Who have surprisingly small number of songs that are widely known and a selection of lesser-known gems are selected from both 1960’s and 70’s, including the ‘Wagnerian’ Doctor Jimmy from Quadrophenia as below.

The influence of such an eminent band will naturally be subject to appropriate scrutiny and with The Who there is no shortage of themes to analyse. One of the most obvious connections is to the Mod movement and a chapter is devoted to consideration of the most famous band associated with it. Whilst Modernism was in full swing they were still called The High Numbers and only started wearing the flags and target symbols as the movement was fading somewhat in late ’65. The sounds of Quadrophenia, now considered a Mod classic, has nothing in common with the Tamla Motown and Ska sounds of the original Mods but the band are destined to be forever associated with the movement regardless.

Likewise, can they be considered punk progenitors? Almost certainly but strong cases can be made for among others The Kinks, The Animals and certainly The Troggs. The point is made that musically The Who may not have been as fast-paced as much punk music, but attitude-wise, with their early contempt for their elders and a studied defiance from the outset, they certainly fit the bill. There was mutual admiration between The Who and Sex Pistols and Substitute was a regular feature of Pistols live sets. The Clash, who would later tour with The Who shared this admiration and Segretto identifies the opening chords of Clash City Rockers as “pure Who.” The Damned, with Rat Scabies drumming particularly influenced and Jam were also fans, but connections are drawn with Buzzcocks, Pretenders, Richard Hell and the Voidoids, Banshees and X Ray Spex among others.

Kinks fans will be pleased to note that Dave Davies has provided the foreword with an insight from their earliest days and confirmation that Pete Townshend has never shied away from citing The Kinks as an influence. However, there is also the long running debate of the extant of mutual influences and Segretto will surely spark more debate by identifying the riff from The Kinks The Hard Way as being incredibly similar to The Who’s Can’t Explain.  Furthermore, the debate about which of the two were the true rock opera pioneers is thoroughly examined. Also interesting is the view of John Entwistle when asked about 1960’s rock bassists unhesitatingly chose Pete Quaife.

Among the other topics that will be of interest are the issues of The Who in films, abandoned projects, wives and girlfriends, politics, religion and even charity work. Mike Segretto is clearly smitten by The Who and has done a fantastic job of channelling that love into this brilliant work which is basically all you will ever need to know about one of the legendary bands.

The Who FAQ is published by Backbeat Books and is available now.