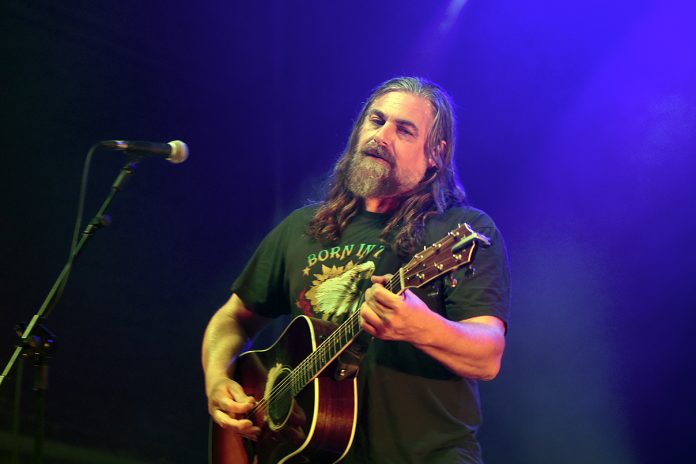 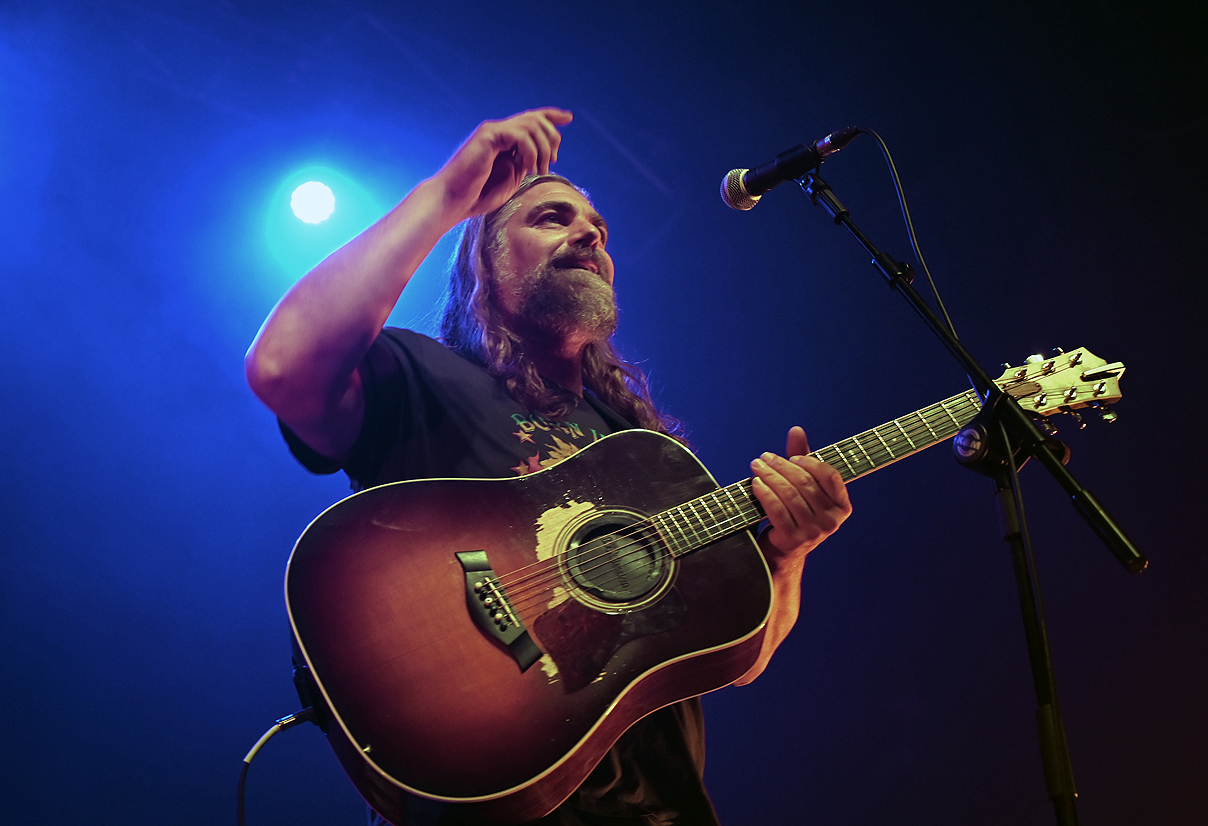 The White Buffalo deliver a stunning performance brimming with raw energy as their twice postponed tour arrives at The O2 Academy, Glasgow.

Americana is a broad church and The White Buffalo’s music contains elements of several branches of the genre. There’s tender, delicate, sometimes forlorn country telling tales of love, loss, drinking, and occasionally redemption. Elsewhere, there’s powerful rock ‘n’ soul and at times outright rock ‘n’ roll. Live, this is music that goes beyond the Americana label. It’s music that’s imbued with a punk/outlaw spirit. Jake Smith (The White Buffalo) claims his greatest influences are Bob Dylan and Leonard Cohen and you can certainly detect elements of the latter in some of his slower pieces. Live though, his deep baritone voice and spirit are reminiscent of Richie Havens in his prime.

No doubt many have come to the music through Jake’s powerful contributions to the American TV series Sons Of Anarchy. There are a fair number of leather-clad bikers present tonight. Mostly though, it’s a mixed crowd, most aged 30 and above. Some are parents with teenage children in tow. 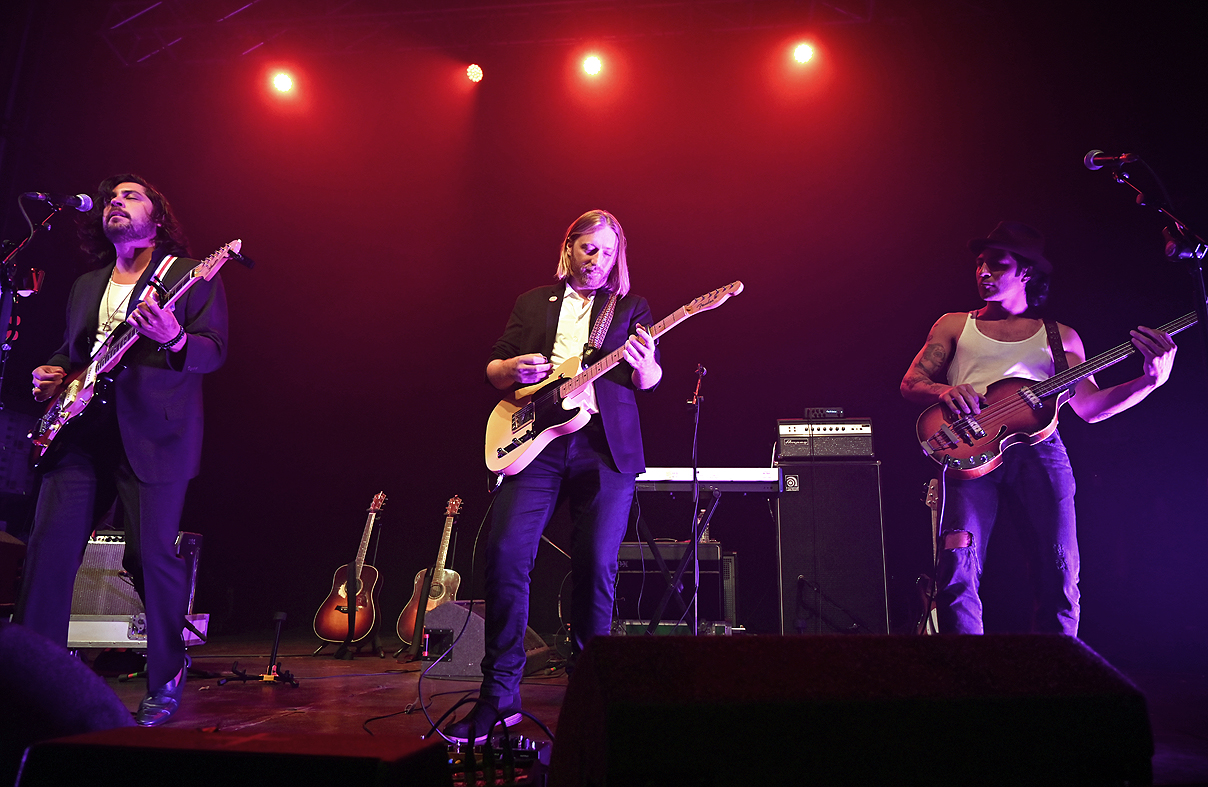 Support comes from L A Edwards who are new to me. Musically excellent, theirs is a sound from a different place and another time. It’s the country-tinged, sun-kissed sound of California in the 1970s. Comprising three brothers plus a guitarist with a passing resemblance to Tom Petty in his youth, there are snatches of different influences in their well-crafted songs. The overriding impression though is of revisiting The Eagles before Joe Walsh introduced a more rocky edge to their sound and image. Having said this, the most poignant moments come when the brothers slow things down to sing three-part harmonies to Townes Van Zandt’s If I Needed You. I’m sure that, like me, they’re unknown to most of the audience but they receive a great reaction. It’s well deserved.

The White Buffalo open with the powerful Problem Solution. It’s delivered with real urgency as though making a statement of intent and a sign of things to come. More songs from the current album The Widow’s Walk follow. The Drifter is melancholy country; a tale of loss and failure, turning to alcohol but retaining glimmers of hope. The compelling title track follows. Thematically similar, it brings the first murmurings of audience singing during the chorus. Don’t You Want It is just made for dancing and the crowd inevitably begin to move, only to be slowed down by Cursive. A lyrically dark tale of decaying, dying love and fear of what the future holds. 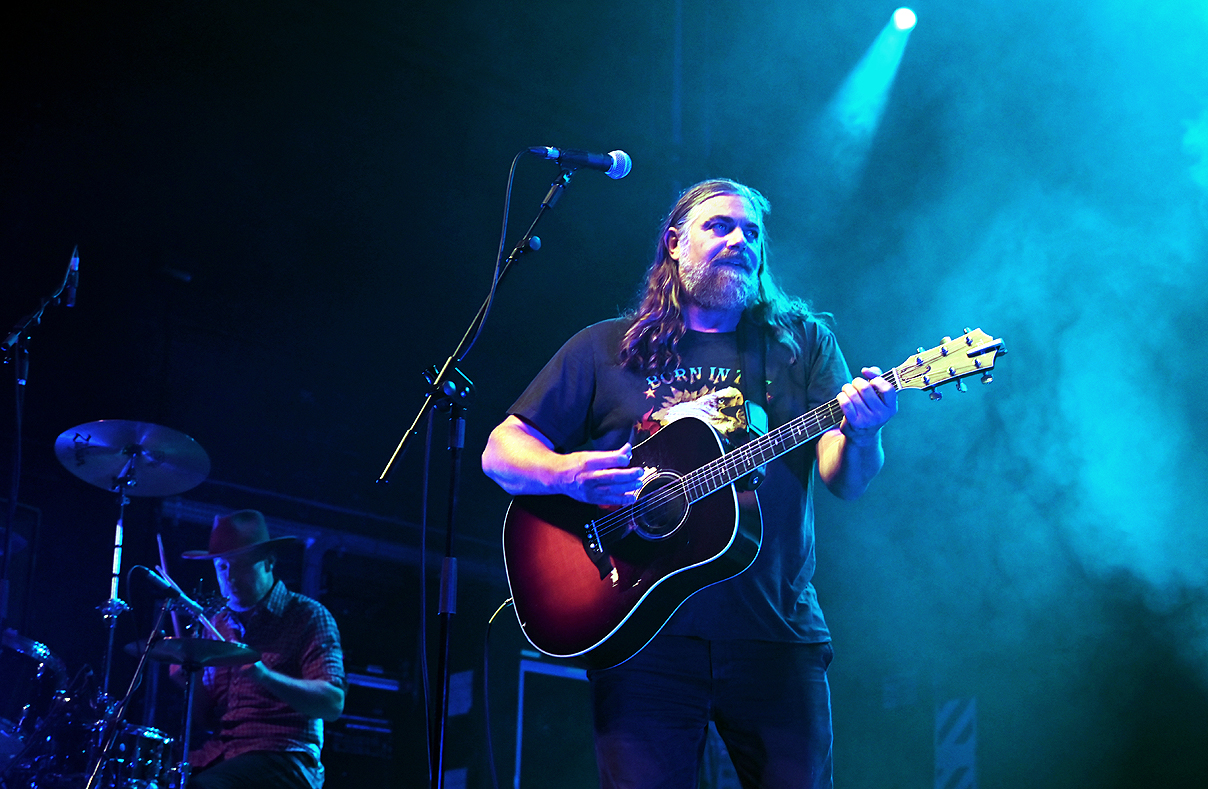 Their delivery of Oh Darling What Have I Done is simply stunning, highlighting what great performers the Buffalo are. This isn’t a band where the drummer lurks unobtrusively at the back. Matt “The Machine” Lynott is front of stage left, raised above the others on a podium. As the music gets wilder, he does too. He’s a force of nature, pounding the drums with almost animal force. Meanwhile stage left is Christopher Hoffee. With the song building from country-tinged beginnings toward an almost unhinged frenzy, he’s prowling the stage with feral intensity. The White Buffalo morph from tasteful Americana into a powerful punk-tinged rock band in the space of a few minutes.

Stunt Driver elevates things further. Beginning with a slow bluesy beat, it erupts into bursts of pure rock ‘n’ roll energy. It’s incredibly dynamic. The Machine’s beating the drums with such force you wonder how they don’t collapse. Jake Smith is careering around the stage, hair flailing as he jumps on and off the drum riser while Hoffee throws shapes with his bass, prowling back and forth glaring menacingly. 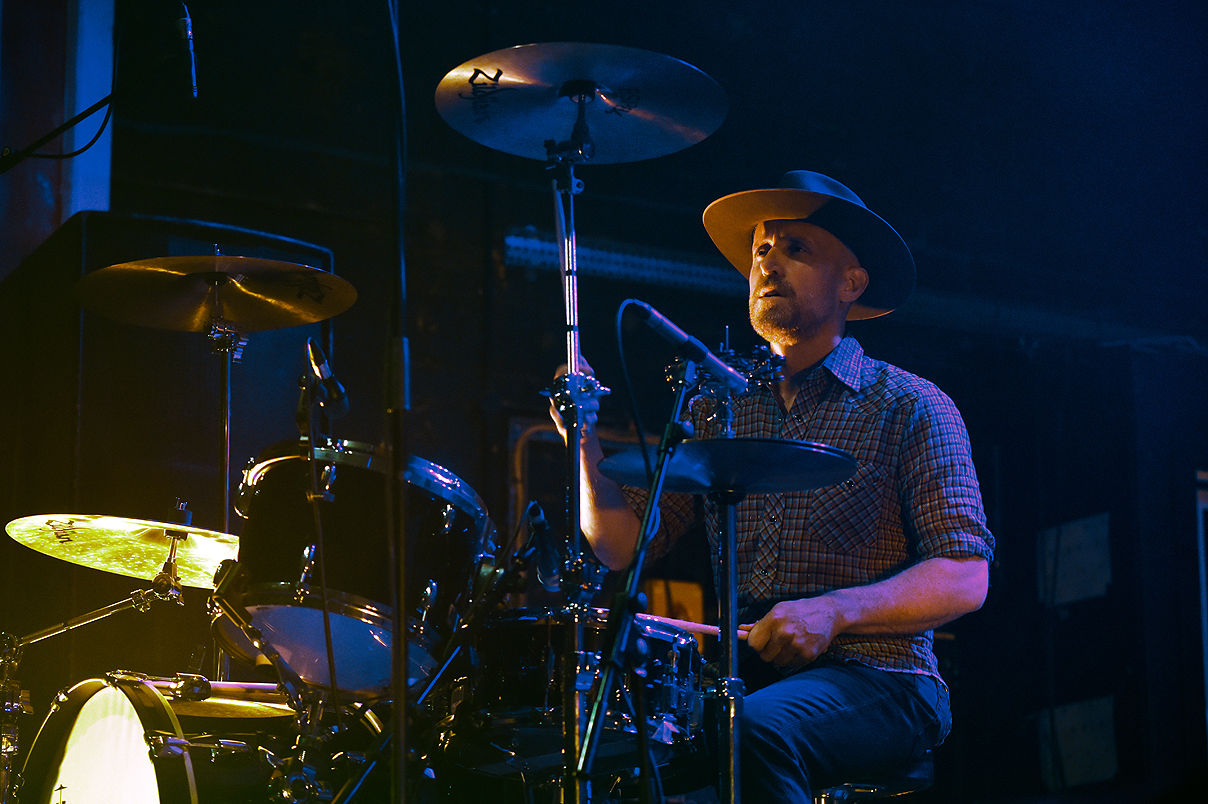 For all the intensity there are moments of lightness and humour too. There’s a heckler who keeps demanding something that my grasp of broad Glaswegian can’t translate. Eventually Jake’s had enough. With a spirit in keeping with The Sons Of Anarchy, The White Buffalo briefly leaves the stage, returning with a large white gun. It’s a water pistol. The heckler is summarily silenced.

They resume with the delicate, tender Sycamore. Then it’s on to No History. For me, the standout track of the current album, urging us not to dwell on past difficulties but to look to the future

As the opening chords of Come Join The Murder drift through the hall, hundreds of phones flicker into life, raised to capture the moment. The song builds as the evocative, poignant finale to The Sons Of Anarchy ushers in mass communal singing. We’re on a real roll now. Joe and Jolene doesn’t exactly lighten the mood lyrically but it’s musically much more upbeat. And then we’re onto The Whistler and its emotionally compelling story of a war veteran’s struggle with PTSD.

The band are capable of changing the mood in an instant. I Got You is gentle and delicate but the mass of voices around me, singing the chorus with such feeling is almost deafening. It’s one of the special emotional moments at a gig that you don’t forget. They won’t let us wallow in sentimentality for long though. Closing, energy laden number, The Pilot is visceral in its intensity, building toward its final ear-splitting scream. 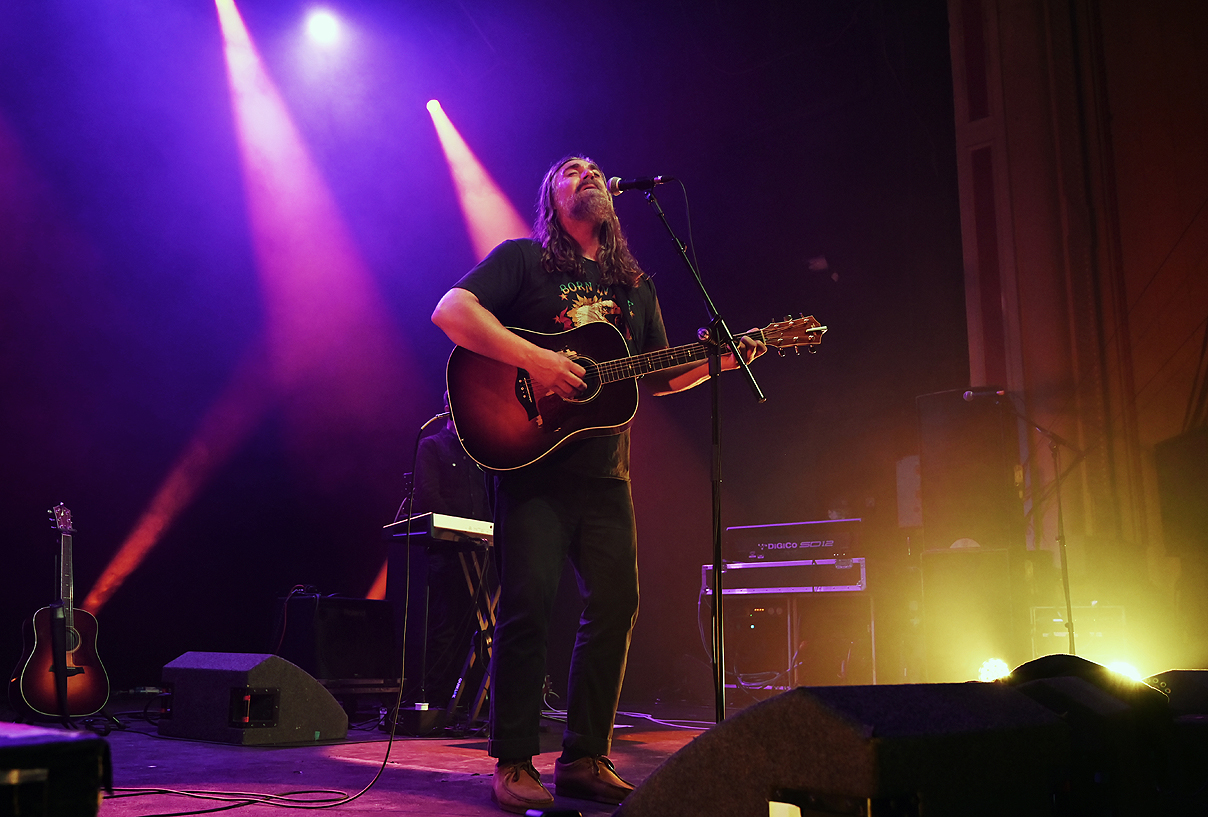 Jake returns alone for an emotive rendition of I Wish It Was True. It’s a sad story of hopes, dreams and Government betrayal. But the others aren’t done yet. They can’t leave us with maudlin negativity ringing in our ears so they come back for a high energy, shit kicking, hillbilly inspired How The West Was Won.

Tonight, The White Buffalo have been a band on fire, transcending and surpassing musical categorisation. We’ve experienced an evening of emotive storytelling performed by musicians effortlessly moving between delicate fragility and passionate raw power. Above all we’ve witnessed a great live band imbued with a rock ‘n’ roll spirit. At the heart of it all has been Jake Smith, The White Buffalo; a storyteller with extraordinary charisma and a voice that holds everything together.