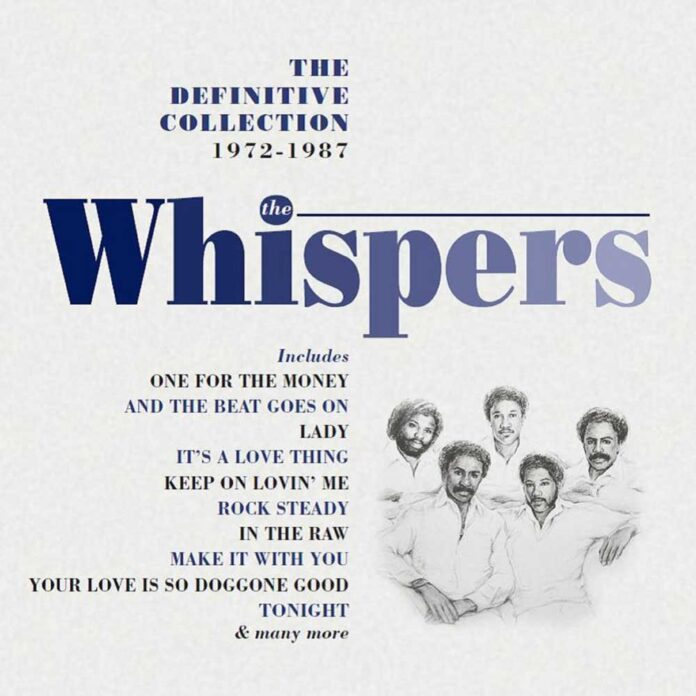 The Whispers: The Definitive Collection 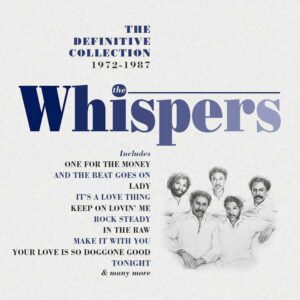 New boxset that covers the years 1972 to 1987 in the life of US soul vocal group The Whispers, who are probably best known in the UK for their top ten hits And The Beat Goes On and It’s A Love Thing…Ian Canty calls for hush…

Though not often mentioned in any discussion of the great vocal groups, Watts quintet The Whispers had such a barnstorming run of success on the US r&b charts from the late 1960s right up to the end of the 20th century that they ought to be well in the running. Though they were not quite so prolific on the American Billboard pop listings, they still managed to post a good number of charting singles and albums in the 70s and 80s and very nearly hit the number one spot in Britain in 1980.

The Whispers originally formed out of the combination of two already existing acts. Twins Wallace and Walter Scott, who had moved from Fort Worth Texas to Watts LA, sang together from an early age. By the late 1950s, they were performing at informal gatherings and talent shows under the name The Scott Twins. The Eden Trio, also a local singing group, were made up of Nicholas Caldwell, Marcus Hutson and Gordy Harmon. In 1963 the Scotts and The Eden Trio threw in their lot together and a year later made their debut as The Whispers with the It Only Hurts For A Little While single. The band became a popular live act and released a number of other records, but they would have to wait until 1969 to make a breakthrough on the US r&b charts with The Time Will Come.

After Gordy Harmon was injured in a car accident in 1973, the damage to his larynx was such that he could sadly not continue singing. He was replaced by Leaveil Degree, who was an ex- member of 1960s hitmakers Friends Of Distinction. By this time the band were now regular visitors to the US r&b charts, cracking the top twenty again with the first track on The Definitive Collection, the elegant and jazz-flecked ballad Your Love Is So Doggone Good. Right through the 1970s the r&b chart action went on apace, but even so they couldn’t quite make the upper reaches of the Billboard pop charts. Of the 10 minor hits they scored during from 1970 onwards, only the first, Seems Like I Gotta Do Wrong, squeezed into the top 50. The albums likewise were fair sellers in America without breaking through.

As the 1970s neared its end that was to change, with the band finally approaching their commercial zenith with a self-titled 1979 opus which attained the number six position in the US. And The Beat Goes On, one of five singles taken from the album, was a big hit in the UK reaching number two and it also cracked the American top twenty. It surpassed the next most successful 7 inch extracted from the LP, Lady, by nine places.

The generally fruitful times continued for The Whispers with the Imagination LP just stopping short of the US top twenty and supplying another sizeable smash in It’s A Love Thing. In 1987 the band scored their biggest ever US hit single with Rock Steady, which also made the UK top 40. 1990’s Innocent was their final mainstream hit, though The Whispers still peppered the r&b listings until 1997’s My, My, My.

The first disc of this new set looks at the years 1972 to 1976, starting when The Whispers were signed to the Janus label. On listening, I was quickly made aware of the touch of class The Whispers applied to their work on both ballads and more up-tempo numbers. The grandstanding In My Heart is a good example of how much emotion they could imbue a slow song with. The featherlight delicacy they bring to Sounds Like A Love Song for instance, is something to behold. To me, their roots in blues and r&b are far more evident on the first two discs presented here, something that faded a little as they kept pace with changing times, but was always there.

A Mother For My Children found the band exploring the disco craze which was in full flow at the time and they recorded their Bingo album in Philadelphia in 1973 using the MFSB house band. They adapt to the Philly sound ably, with Crackel Jack showing some neat funk moves. After Bingo they signed for the Soul Train imprint, linked to the highly successful television show. They didn’t alter their approach though, drawing on the strings and big production that were Philly trademarks well again on both Put Me In The News and In My Heart

On disc two we move to the late 1970s. The Whispers were shuffled over from Soul Train to the Solar label for 1978’s Headlights album. Solar was one of the premier disco imprints and this move eventually helped the band crossover from being r&b listings regulars to national chart stars. Open Up Your Love shows the shot of real beauty and emotion they could always be relied on to deliver vocally and their blues and jazz leanings come to the fore on an effortlessly cool You Never Miss Your Water. The Planets Of Life has The Whispers on a space funk tip, with well-judged bass and guitar powering them along.

The dreamy, optimistic Try And Make It better touches on jazz styles again, but Whisper In Your Ear Shows how capable and confident The Whispers were in the disco era, easily coping with the upbeat sound without losing their character. This disc depicts a band clearly on the rise and appropriately ends with Lady, their biggest self-penned single. This was a big r&b hit and also made the UK and US pop charts in the wake of And The Beat Goes On. Talking of which…

Disc three starts with a 12 inch version of that very song. Many, many plays over the years have not wilted its carefree charm, a peach of a single. The Whispers had hit a high point at this time and everything comes together very well, lots of funk moves, the subtle application of a modern sound, plus those soulful harmony vocals and assured instrumentation all make for a potent brew. Out Of The Box, another single, is a lot of fun and very danceable. It disappeared without trace on its single release, perplexing as it appeared to have all the ingredients needed to thrive.

We then move onto 1980’s Imagination album and its big hit It’s A Love Thing, which like And Beat… hasn’t lost much of its appeal despite being a staple of oldie radio stations. The title track was mooted for a single release, but in the end never emerged. It was possibly a bit understated to make an impact, making it more a good album track, but to me this is a pleasing breeze of a tune that cheered up my day. I Can Make It Better is in the mode of It’s A Love Thing, though perhaps that was the problem – it just wasn’t quite distinctive enough to repeat the success of its predecessor. Taken on its own, this is still a solid slab of post-disco soul though and thoroughly enjoyable.

Up On the Soul Train is a raging funk/disco/soul combo, with some great guitar and brass. This is possibly my favourite of the whole collection. The opening effort of 1982’s Love Is Where You Find It was In the Raw, which shows The Whispers cannily adapting their sound to incorporate electro funk and hip hop rhythms and there’s even little rap section too. It made a splash on the r&b charts but stopped short of the hot 100. Even so, it displays how well they kept their sound fresh over the years by moving with the times, whilst retaining their core strengths.

Emergency (neither the 999 or Girlschool songs of course!) is another handclapping goodtime funk/soul offering, but Love Is Where You Find is a restrained, slightly jazzy and delightful slow devotional song. This section of the set is concluded by two tunes from 1981 LP This Kind Of Lovin’, the cool and funky title track and dramatic ballad I’m The One For You.

The final platter included here covers the mid to late 1980s in Whispersland. The subtle funk moves of Keep On Lovin’ Me and a classy slow jam in Love For Love open things up. I very much enjoyed the groovy synth and electronics of minor US hit Tonight. Though the gimmicks may have dated since this time, they make for a pretty entertaining juxtaposition when taken with The Whispers’ harmony soul vocal chops.

Their biggest hit in the US was still to come with the state of the art sonics of Rock Steady, which climbed as high as 7 on Billboard and topped r&b listings. This is a smooth and easy groove with a big hook that got in the top 40 in the UK too. Special FX is cut from similar cloth, depicting The Whispers, a band of over twenty years standing at the time, still close to the cutting edge. This disc and the set ends with a couple of seasonal oddities from the Happy Holidays To You album, a record that was released for Christmas 1980. Of the two, Funky Christmas does what it says on the label in fine style.

The Definitive Collection rounds up a whole lot of feel-good soul/funk/disco and reveals The Whispers as masters of whatever style they turned their hand to, developing at their own pace but always presenting music that was ripe for repeated plays on both the dancefloor and the radio. A version of the band exists today, which the Scott twins and Degree lead. Caldwell and Hutson sadly no longer with us, but the music all of them have left us with is worth treasuring. This set has good sleeve notes from Lois Wilson and is very well put together. It proves also that The Whispers’ tunes and performances were built to last, with those peerless harmonies a good fit for whatever they chose to attempt.