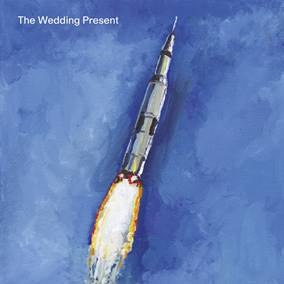 The Wedding Present today announce their first new material since 2017 with a new 2 track single. With a bunch of different formats for the release there’s an option for all guests of the bride and groom. Article by Matt Mead.

Indie luminaries The Wedding Present are set to release a brand new single this summer, their first new material since the spring of 2017. Released on 2nd August via Come Play With Me, the single features two new tracks: Jump In, The Water’s Fine and Panama, and is available on 7” and limited edition 10” picture disc, the band’s first!, featuring specially commissioned artwork by Darren Hayman (Hefner).

Co-written by David Gedge and new guitarist Danielle Wadey, who was previously the band’s bass player, both tracks were recorded at the legendary Monnow Valley studios in Wales under the watchful eye of multi-Grammy award winning producer Andrew Scheps and engineer Matt Glasbey.

Opening with squalls of feedback, Jump In, The Water’s Fine is an epic tale with trademark whirlwind Wedding Present guitar and a deceptively sweet melody. “Danielle came up with the solo bass part after I said I wanted to do a song that was bass-driven and it just got fatter and heavier! We also now have three vocalists in the band so we used the opportunity to experiment with some a cappella singing, too,” says David.

B-side Panama, is a frenetic slice of indie-pop, where ferocious guitars and heavy drums collide with honest lyrics about love and friendship. Of the recording, David adds, “As well as including one of my favourite palindromes, Panam references Earthrise, the iconic photograph of Earth taken by astronaut Bill Anders (during the Apollo 8 mission) on Christmas Eve, 1968. We decided to incorporate samples of the astronauts talking to Mission Control.”

On the back of this release, The Wedding Present will be performing a series of 30th anniversary Bizarro shows across the UK, Europe and Asia in 2019 in celebration of the band’s major label debut album.

Orders made via https://cpwm.awesomedistro.com will receive a voucher to obtain 20% off of purchases/subscriptions from the CPWM 7” singles club or and The Wedding Present releases from Hatch Records.