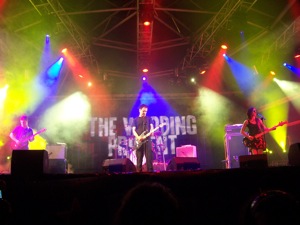 The Wedding Present head for Scotland while you don’t need a passport. Steve Mcgillivray reviews.

Hot on the heels of performing Watusi at The Edge of the Sea Festival, The Wedding Present headed north for a couple of dates in Scotland. With the more illustrious gig in Glasgow alongside bands like Mogwai, The Twilight Sad and Honeyblood, the band warmed up the night before in the slightly less glamorous surroundings of Leslie, a small Fife town. Even though I live about twenty minutes drive from Leslie, the venue wasn’t one I’d heard of before so I set off with my wife a little apprehensive of the unknown.

There was no need to worry though about the location though. The venue was a decent size and the good sized crowd had a good view of the band from every part of the room. Venue worries laid to rest, it was off to the merchandise stand. Sadly I was not flush with cash (maybe that was a good thing in hindsight) as they had tons of goodies I wanted but I settled on the band’s latest 7″ and arranged to collect it after the gig.

After finding a good spot near the stage it wasn’t long until the band meandered through the audience and took to the stage while the intro to The Thing I Like Best About Him Is His Girlfriend played over the PA. There was a nice surprise though as the PA faded and the band launched into Hot Pants. There was some comedy value from the audience when the music stopped and people shouted out “Yeah”. Everyone was here for a good time and that was apparent from the cracking opening song which the audience lapped up.

The mood was maintained when the band launched into Brassneck with some vigour. David Gedge referred to tonight’s lineup as “The Time Machine Wedding Present”, including Paul Dorrington on guitar, Graeme Ramsay on drums and Missy Tassles on bass guitar. Another fear of the smaller venues can be dodgy sound, but again the Greenside Hotel nailed it with the band sounding fantastic. The bass and drums sounded good and meaty in the small room. Blue Eyes and It’s A Gas followed and by now the crowd was really getting into it.

I did get one guy plank himself right in front of me and then wield the smartphone in the air for pretty much the rest of the gig. “Get with it, Grandad”, I hear you say but it does bug me when people do this. Anyway, pet peeve aside, Corduroy was the next Gedge classic to get an airing and Time Machine Wedding Present or not, to my ear the band sounded tighter than the proverbial Scotsman. At the end of the song Mr Gedge opened the floor to questions and given the current political climate in Scotland it was no surprise when someone simply yelled “Scottish Independence. Yes or No?”. After initially appearing hesitant, he laughingly said he didn’t care, before a straw poll of the band revealed total backing for the Yes campaign, though I suspect it was all tongue in cheek really.

Scottish politics out the way, we were treated to a stirring rendition of Suck, during which that rhythm section again sounded immense. As the heat began to build the band got into their groove with the excellent Bewitched followed by a fabulous Crawl, when Gedge jokingly referred to the band as being like Mogwai. Love Slave was no less brilliant with the band’s energy rising with the heat inside the venue. The chiming guitar on Love Slave sounding particularly good. The penultimate song of the set is My Favourite Dress, which gets a really good reaction from the audience. It’s fair to say that this is the highlight of the night’s set for me, although that may be like splitting hairs. It fairly bounces along, with the crowd a sea of nodding heads in response. Far too soon it’s the last song of the evening, but what a song to end on. Flying Saucer sounds great. There’s a good tempo to the song and great energy that’s just perfect to close out this short, intimate gig.

I manage to remember and pick up my vinyl on the way out and then spent the car journey home making up a playlist of tonight’s setlist (three days later and it’s all I’ve listened to over the weekend). It was a real treat to see such a good band in a small, out of the way venue. Everything about the gig was just spot on, from the size of the room, to the audience down to The Time Machine Wedding Present. A perfect night in every way possible. Now I wish I was going to Glasgow too.