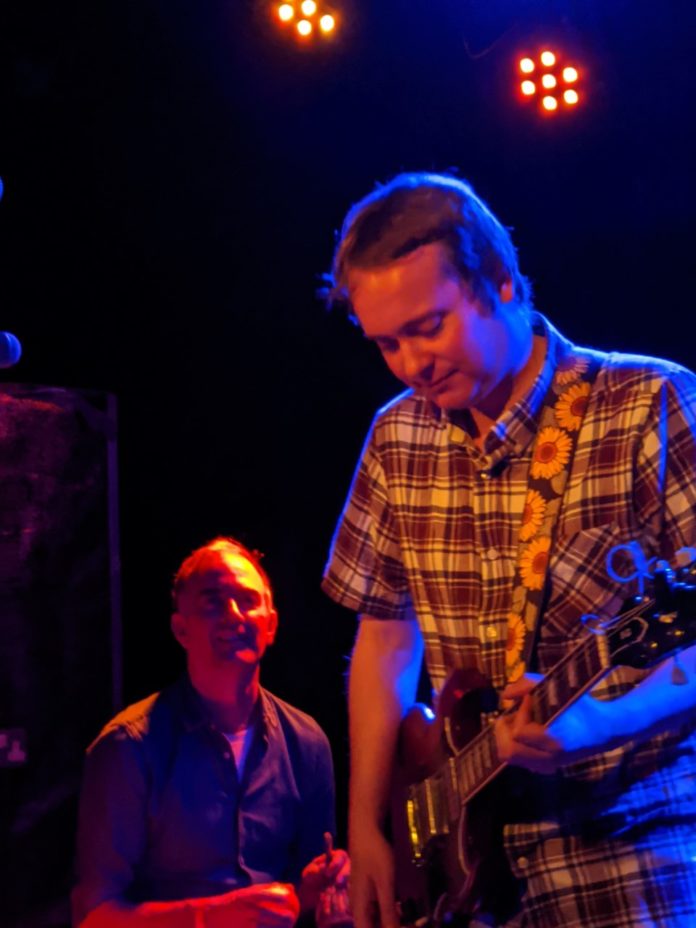 “Who is this man?’ I hear you say,” asks the drummer, after the latest in a series of searing solos by the guitarist and frontman of Wave Pictures. “Who is this man who plays the guitar like that? Why, it’s David Tattersall!”

The frontman, an unprepossessing fellow with something of the young Pete Shelley about him, stands there in his unfashionable check shirt and crumpled trousers, smiling shyly. “It’s me!” he grins. And off he goes again, with another story (“I was watching First Dates on telly last night and I discovered the importance of banter”), another confessional lyric filled with self-effacing humour and smart rhymes, and another crunchy riff that soon spirals into cascades of shimmering beauty from his Gibson SG.

Formed in Loughborough 25 years ago, The Wave Pictures are a unique trio, Tattersall’s eclectic guitar styles amplifying lyrics that paint a picture of everyday life in all its joyful ordinariness in a wealth of musical styles. Anchoring these songs, snapshots of a life filled with small pleasures and minor disappointments, are bassist Franic Rosycki and drummer Jonny “Huddersfield” Helm, a duo virtuosic enough in their own right to merit solo spots of their own.

Nothing if not hard-working, tonight the band have just completed a two-hour matinee set at the same venue and, after barely half an hour’s rest, are now performing a second show, even supporting themselves in a 30-minute slot before returning for almost another two hours. 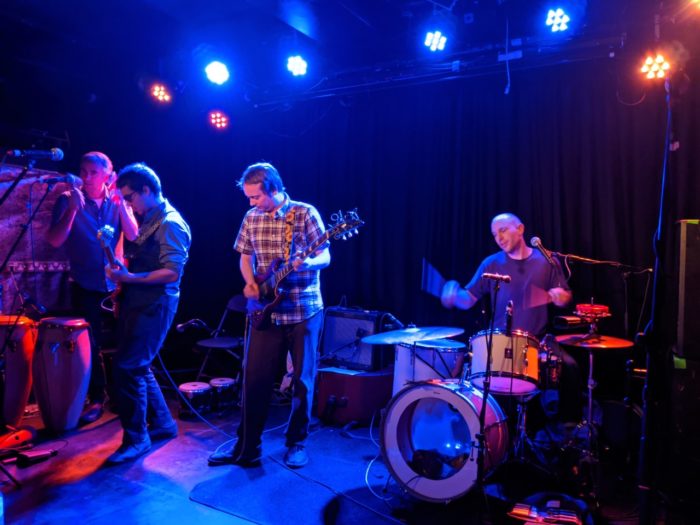 They open with a choppy guitar riff that evokes Dr Feelgood and quickly reveals itself as a hommage with the title Canvey Island Baby, Tattersall’s note-perfect Wilko pastiche giving way to an off-kilter guitar solo that hints at what is to come.

Yet it’s his naïf persona and lyrical style, sitting somewhere between Jonathan Richman and Daniel Johnston, as well as his bewilderingly boyish looks – he genuinely looks at least a decade younger than his bandmates – that holds the attention.

He has a gift for finding poetry in the mundane minutiae of life, singing them in an almost conversational style, as if confiding personal secrets. His sharp observations are combined with a caustic wit that sits somewhere between Morrissey and Alan Bennett, as well as a wondrous way with a rhyme: who else could possibly come up with a couplet combining “chicken jalfrezi” with “jealous and lazy”?!

Tattershall’s kitchen-sink lyricism harks back to a more innocent age, one in which we are all living in seedy bedsits (“There’s lager – flat lager – in the mugs and in the cups around your sink”) and taking girls to the beach in the hope of sparking romance with a post-swim snack (With salt on our skin / We shared a tin of kidney beans”). 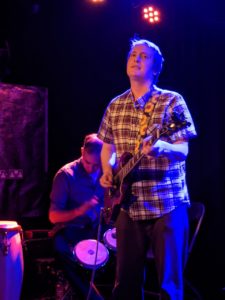 Tattersall loves the seaside – several songs involve beaches and kisses with salty lips – and evidently loves Christmas, judging by his wide eyes and even wider smile whenever he mentions it. Which is pretty much after every song. “Let’s get you all joining in the chorus,” he encourages cheerily. “One more time… And one more time for Christmas.” As my friend said, it would come as no surprise at all to learn that he’s expecting a visit from Santa on Tuesday night.

Even Alan Bennett might struggle to find as much poetry in the mundanity of a night out in a provincial town as Tattersall does in Friday Night In Loughborough, a song that does exactly what it says on the tin (of kidney beans). “You walked all the way from the Griffin to the Moon & Bell / Threw up outside the Curzon and that’s where you fell / And that’s how you ripped your tights / But you made it back on your feet all right / With the girl from Baker’s Oven holding back your hair.”

We’ve all been there; and that’s Tattersall’s gift: the ability to convey the everyday in forensic detail with humour and humility: the poetry of the everyday. Spaghetti, another fan favourite featuring an impressive solo by Rosycki (“the greatest bass guitarist in the world!” beams Tattersall), tells that story of a seaside romance and captures both sides of Tattersall’s writing, the throwaway gag (“You must know I’m stuck on you / Stuck as if with airplane glue”) and the romantic (“Wild hair tumbling from the centre of your skull like spaghetti / I knew then that you’d never forget me”).

Pool Hall finds more poignancy in the mundane, lamenting the demolition of the titular meeting place to make way for a new block of flats: a sort of musical counterpart to Peter Bogdanovich’s timeless metaphor for lost innocence in his coming of age classic The Last Picture Show. For the festive season, he digs out several oldies from the very earliest days of a decade of recorded output, involving as many as three albums a year.

One of them is Cassius Clay. “I had a dream last night that I was boxing against Muhammad Ali,” he explains, adding unnecessarily: “I don’t know how to box. But my trainer was Mike Tyson… and I won!” He sounds unnaturally pleased with his virtual victory over The Greatest.

The only slight dent in the overwhelming wave of festive good vibes comes when Helm, who sings a handful of the songs himself, accidentally demolishes his drum kit during one particularly frenetic solo and seems to take offence when Tattersall, attempting to replace a cymbal, makes a quip “faulty technique.”

Fortunately, Helm channels the energy into his impassioned vocal performance when he steps to the front to sing his party piece about his love for a girl with a Lazy Eye, his drum stool temporarily taken by guest percussionist Dave Beauchamp (from the Jeffrey Lewis Band). “Yoooorkshire!” shouts a partisan audience member, approvingly, at the end of the song. “WEST Yorkshire,” mutters Helm, still smarting from that jocular slight on his skills.

It’s not all light-hearted: Like Smoke conjures haunting images to evoke the gloom of depression in a song involving Tattershall scattering his grandfather’s ashes, pouring his emotion into the guitar solo before finding joyful communion in an elegiac chorus that has the whole room singing triumphantly: “We will rise above the city like smoke”.

You can find out more about The Wave Pictures at their official website, hear and buy their many albums from their Bandcamp profile, and find out the latest news and gig schedule on Facebook and Twitter.