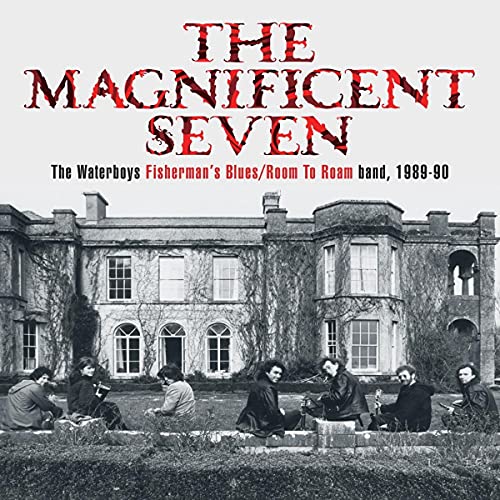 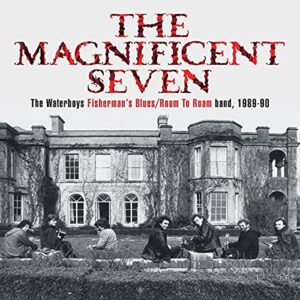 The Waterboys: The Magnificent Seven

This exquisite box set serves as a companion set or follow up to the Fisherman’s Blues box set from a few years ago . It is a must have for fans of The Waterboys, whether they be completists or just have a love for the music of Mike Scott and Co.

For the uninitiated, the seven that the title of this box set alludes to are, of course Mike Scott himself, alongside long-time band members Steve Wickham, Anto Thistlethwaite and Trevor Hutchinson joined by Sharon Shannon, Colin Blakey and Noel Bridgeman.

The box set is a chronological record, documenting the seven’s relatively short time together (15 months) providing, across four discs, just a snapshot of the magic created by these incredible musicians and songwriters. Disc five is the the remastered version of their Room to Roam album.

For some fans I knew at the time, Room to Roam was a step too far into Raggle Taggle territory, but for me the album will always have a special place in my heart. I frequented a pub called Brahms and Liszt in Glasgow in the late 80’s/early 90s, and during the year of Culture in 1990, there must have been a fan of the band working there, as the album was often played on repeat when the bar was open into the wee small hours. More importantly, from a personal perspective, it spawned the song that would go on to be the first dance at our wedding, How Long Will I Love You?

From The Big Music to Raggle Taggle

I do believe that any fans that may have been put off by Room to Roam, will have their minds changed if they took the opportunity to listen to the superb array of musical gems on offer on this very special collection. The content of the box set spans the time of The Big Music and takes it into the Raggle Taggle territory, with plenty of stunning versions of older Waterboys anthems interspersed between he new songs of the time, cover versions, outtakes, rough versions and demos.

On occasion when a band releases such box sets, it strikes fear and trepidation into your heart. Often they contain so much superfluous fluff, terrible versions of songs that had remained unreleased for good reason, demos that should have remained demos and the tapes  re-purposed. With The Magnificent Seven box-set though, I never had that feeling as I listening through each disc in turn, initially prior to reading any sleeve notes , and marvelling at the surprises and absolute gems from the archives that were gracing my eardrums for the first time.

As I mentioned, the discs are compiled chronologically, covering the period the seven recorded and played together, starting with Celtic Summer, and moving through the seasons, The Ramblings of Autumn, Winters Work and Atlantic Spring, an eye watering 86 tracks in total (not including the re-mastered Room to Roam).

The collection starts with the epic And a Bang on the Ear, recorded live at the legendary Barrowland Ballroom, prior to the seven coming together, and later overdubbed with Sharon Shannon’s squeezebox.  This was to be the single, but was dropped in favour of the album version. The four discs close with the appropriately touching The Music Lasts Forever based on a reel called the Sound of Sleat, by Donald MacKinnon of Skye.

Sandwiched in between is a positively overflowing cornucopia of classic Waterboys. Of course, the live arena is where The Waterboys excel, so live versions of Old England, Fisherman’s Blues, A Pagan Place and Spirit among others excite and inspire. The moment where Mike Scott “finds” Hank amongst the Scottish Fiddlers of Los Angeles brings a smile to the face.

Then there are jaw dropping moments when Sharon Shannon demonstrates just what a fiend she is on the accordion. Real statement pieces like e Disease of Conceit and the call to arms that was Maggie (Its Time for You to Go) all nestle seamlessly beside, inspired cover versions, the band’s take on traditional tunes and demos and rough mixes of the songs that would go on to form the backbone of the emotionally compelling Room to Roam album.

In addition to the 5 CDs there is a DVD (for those who still own such a thing) containing a series of what the notes describe as home movies. Essentially a coupe of gig bootlegs (including their 1989 Glastonbury performance) alongside footage of recording sessions and the band playing together. Despite the grainy picture quality and sound issues (these are bootlegs after all) these are a captivating watch, taking you back to a time and place in your memory having seen these seven incredible musicians playing together (even if you hadn’t attended the specific gigs in question on the DVD).

All told this is a wonderful commentary of a special period in the timeline of the band, capturing the essence and spirit that made these seven click so wonderfully and enabling them to create such memorable moments that we can now all savour. If you are struggling to think of a perfect Christmas gift for the Waterboys fan in your life, you’ve just struck gold.