Warner E. Hodges returns with a brand new band to release his fifth solo album, Just Feels Right, which once again defines the very essence of rock’n’roll. Ian Corbridge hitches a ride on this relentless train from Nashville to savour every last note from this great rock’n’roll showman.

If anyone asked me who I thought was the hardest working musician in the world of rock’n’roll I would have no hesitation in saying Warner E. Hodges. Born into a family of professional musicians with a passion for country music and taking up the drums for the their band, Warner’s destiny in life was shaped out very early on. An introduction to Deep Purple and guitarist Ritchie Blackmore prompted an immediate switch from drums to the guitar. Fusing this with the start of a life long love of AC/DC and exposure to the DIY punk ethic of the Sex Pistols all served to produce a cocktail of influences that has carried Warner right through his career.

Throughout his teenage years Warner cut his teeth with a number of Nashville punk bands until the meeting with singer Jason Ringenberg resulted in the creation of Jason & The Scorchers which is where things really took off. The Scorchers embodied punk, country and rock in equal measures but crucially they were completely original. In fact the Scorchers played a key role in creating and defining a genre of music that we now know as Alternative Country or Americana.

In between the implosion and subsequent resurrection of the Scorchers, Warner hooked up with Dan Baird and Mauro Magellan from a the influential southern rock band The Georgia Satellites to form Dan Baird & Homemade Sin, another powerhouse rock’n’roll unit who quickly established a relentless touring schedule. Given Dan Baird never really worked to a setlist, their shows were always unpredictable as the band worked to a revolving roster of around 150 songs on any given tour. On top of this it’s also worth noting The Bluefields who were another side project for Warner and Dan together with long term collaborator Joe Blanton.

Alongside all of the above, Warner has managed to fit in four excellent solo albums featuring a range of musicians all with a very strong pedigree. For his fifth solo outing, Just Feels Right, Warner decided to establish a core of permanent musicians drawn from Europe where he now spends an increasing proportion of his time, at least until the pandemic took hold.

So now we have Ben Marsden on guitar, Jason Knight on bass and John Powney on drums. However this is also augmented by Dan Baird on guitar, Joe Blanton on vocals and harmonica and Max Abrams on saxophone. Both Dan and Joe also contribute significantly to the song writing credits.

From the opening bars of Preachin’ To The Choir there was little doubt where the influences for this album came from and it simply roars off at a frenetic pace that has become a staple of all of Warner’s live performances. So that’s four minutes gone and I’m already on board with the prodigal son in a very big way. Last Train Outta Town which follows has a swagger all of its own together with more than a musical reference to the classic legacy of Lynyrd Skynyrd within its grooves.

Title track Just Feels Right gives a healthy nod to Warner’s country roots and is as Scorchers as you can get, which is no bad thing at all. This song perhaps more than any other on the album proves that Warner really has nailed his vocal delivery to the mast and the results are exhilarating. The Magician steps down the pace to pure country with a classic tale of life in the bottle and there is little doubt this pulls on the very roots which started Warner on this magnificent journey.

Where You Gone has the guitars duelling on overdrive as the relentless search for love goes on whilst the pace eases back into a folk rock tempo through Company Man. Nickel and Dimin’ takes us back into good time rock’n’roll territory with a heavy AC/DC thread throughout. And I detect a definite hint of Stones style Satisfaction in the closing refrains.

Higher Ground most definitely tips a hat to the boogie woogie style of Little Richard driven along with some superb interplay between the guitars and the saxophone. This is going to be simply immense when the live shows finally kick back in and I can already see Warner swinging his guitar around his neck in trademark fashion throughout this one. So if you are at the front, I recommend you take a step back when this one cuts loose. 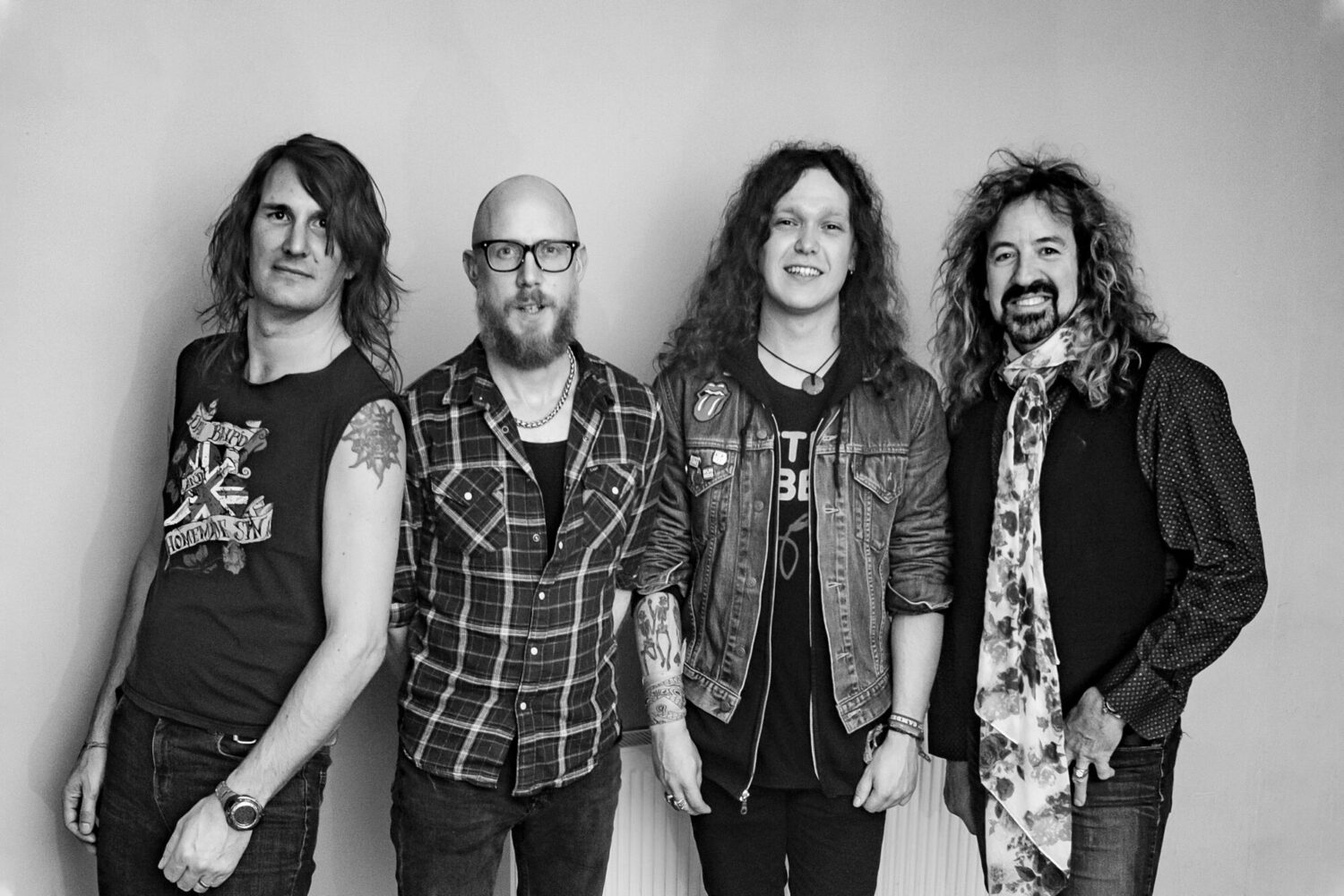 In Your Dreams embodies the very meaning of country rock as the driving rhythm conveys a heart breaking tale of romance which is only realised whilst the lady sleeps. Don’t Bring Me Down again has a Scorchers feel about it with lots of attitude and a wailing harmonica feeding off the guitar onslaught.

Take Me Downtown was seemingly inspired by an unusual chord sequence that Dan Baird came up with which eventually evolved into a sound inspired by the likes of Jeff Beck and Jimmy Page. This creates a rhythm which has an almost hypnotic feel which penetrates the soul. Callin’ Me Home closes the album with Warner’s take on acoustic folk recorded live in the studio.

Warner Hodges not only wears the biggest smile in rock’n’roll and is one of the most outstanding guitarists I have ever had the pleasure of seeing on so many occasions, but he has always surrounded himself with the finest calibre of musicians and this album is testament to that. This might be a debut album for this new band but it most certainly carries on a very well established legacy in fine style.

Put simply, Just Feels Right is a monster of an album with all the best southern rock’n’roll and country traditions riddled through it’s very bones. Warner and his new band take no prisoners and this stands up against anything he has done before. Once we are all back in a live environment this album is going to blow some rooves off and I can’t wait to be down the front to pick up the pieces. UK dates are already scheduled for May 2021 so lets hope these can go ahead as planned.