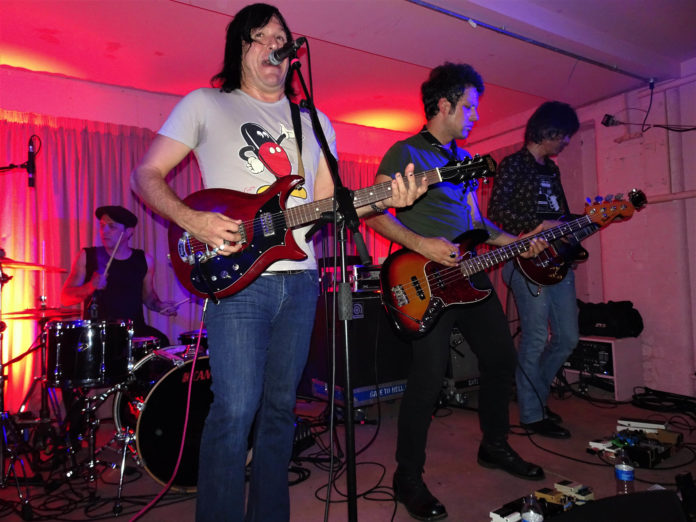 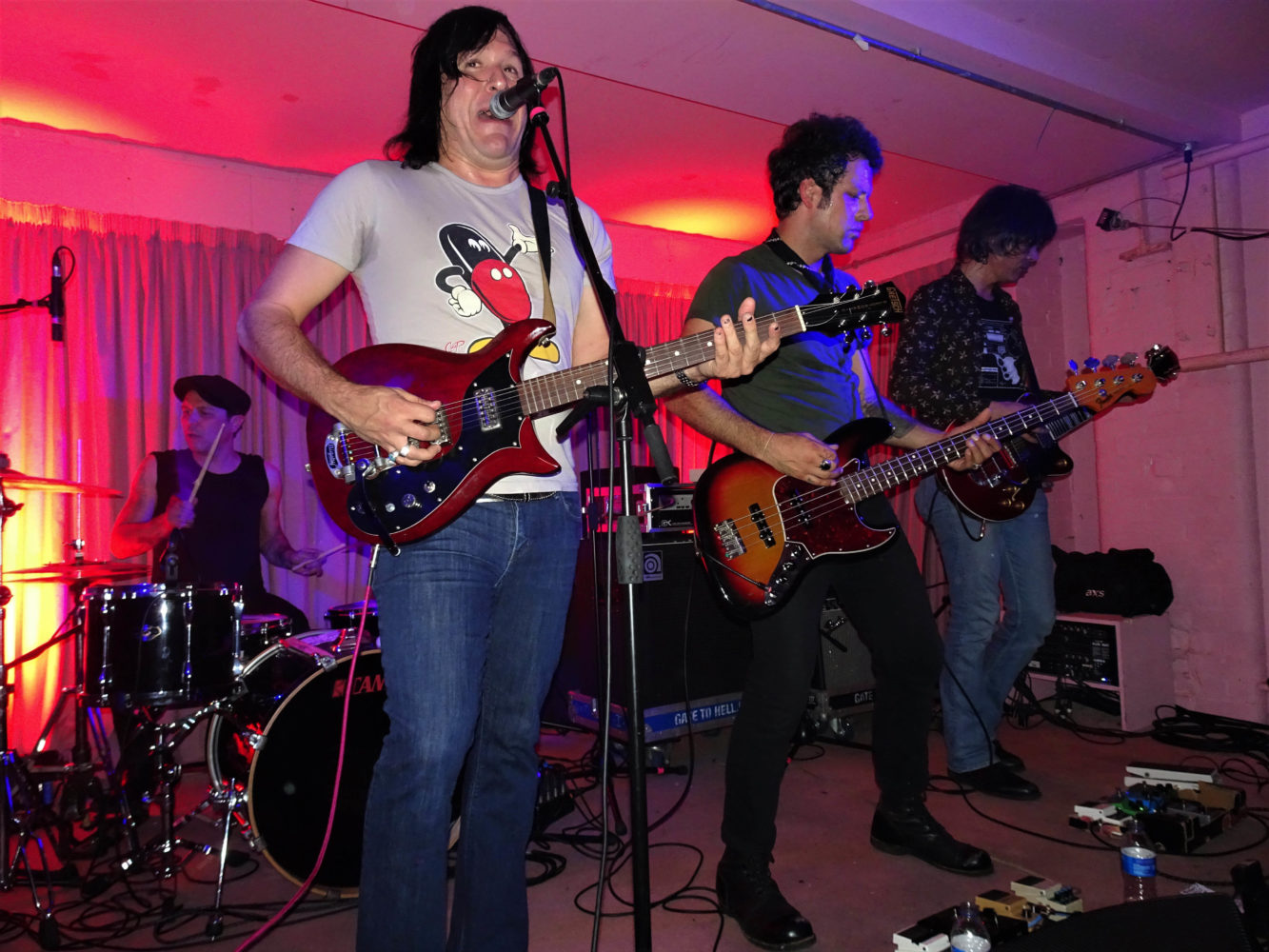 The phoenix is once again rising for the angry demons from the psychedelic underground as Ian Corbridge catches The Warlocks as their European tour stops off in Manchester.

There is little doubt that the musical legacy of The Warlocks continues to be built on their ongoing desire for experimentation and exploration of new sonic pastures. This is demonstrated once again in their recently released eighth studio release Mean Machine Music which the band are promoting on this jaunt across many European borders. The roots of this album started some two years ago and finally saw the light of day with 5 new compositions together with 4 instrumental reinterpretations which take the band down various unchartered paths.

This legacy of ever shifting sands is in part attributable to the ever-changing line-ups over their illustrious 20 year history, initially stabilising as an eight-piece outfit with 2 drummers, and more recently evolving into a more standard 5 piece. Collaborations with various different producers have also influenced their sound development. However, the fact that the band name was taken from an early incarnation of The Velvet Underground gives a strong clue to one of their primary musical influences which is always evident throughout any live set. Regardless of all this and in common with their fellow Californian substance-fuelled and psychedelic rock neighbours, The Brian Jonestown Massacre, they have been cemented together by one common denominator, guitarist and front man, in this case Bobby Hecksher.

The Stevenson Ranch Davidians, fellow Californians, provide a very able warm up in support of their third album Amerikana, their first since 2009. This album is promoted as a celebration of life and the senses and the band come across as a hybrid psyche/folk rock sound with an underlying confidence that immediately puts you at ease. There are no tricks here, merely shifts in tempo and melody and high quality guitar craft without the need for any extended jams. The 55 minute set is received warmly by the ever growing crowd.
After a very quick turnaround the Warlocks appear with a three pronged guitar assault which immediately plunders the archives with Shake the Dope Out which, as ever, segues seamlessly into The Dope Feels Good. The inspiration behind their early songs requires little imagination and the high energy tone is already set for the night. 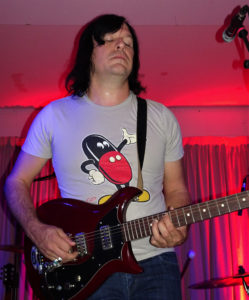 angst before the band moves swiftly into the driving power and epic rock’n’roll of It’s Just Like Surgery, full of tales of personal longing. Taken from the 2005 album Surgery, the band had at this stage moved into more mainstream territory with a harder edged brand of rock. However a perceived pressure towards a more approachable sound and radio friendly album did not in their case lead to commercial success which led to the Warlocks being dropped by their label. From the same album, Come Save Us ‘from ourselves’ comes across almost as an apology for all the misdemeanours that had preceded them, but is nonetheless a powerful romp.

Hurricane Heart Attack is to the Warlocks what Street Fighting Man is to the Stones in terms of the way it builds as the song develops with driving distorted guitars and thundering drums. Always a highlight and a real power house of a song with heavy riffs, distortion, feedback and an overall barrage of sound.

Caveman Rock takes us back to when the band could get away with just three chords in a very admirable way and this theme continues through Stickman Blues. The power and dynamic of Angry Demons is simply captivating with droning, spiralling guitar solos aplenty. Warhorses follows which Bobby recognises as a rarely played song with its first outing on this tour as it nears its end, but Bobby clearly enjoyed playing it as did the audience from the reaction it got.

Dead Generation and Chameleon bring us more up to date from the 2014 album Skull Worship before a rare performance of Inside Outside takes us back to the more hypnotic sounds of their second album Phoenix and bring the set to a rousing finale.

Of course the band return for more as the encore swells to the wall of sound that is Isolation, again dating back to the Phoenix album from 2002. This segues straight into a storming We Need Starpower which conjures up a sense of longing and regret as Bobby tells us what they need to do ‘to make our dreams come true’.

Tonight, our aural senses were challenged in the most magnificent way as the band took us through so many highlights from their now extensive back catalogue of songs with quite a heavy emphasis on some of their early material and, in typical fashion, not one song off the latest release. The mood and context of many of the songs contrasts sharply within the bright pink walls which surround their performance tonight! 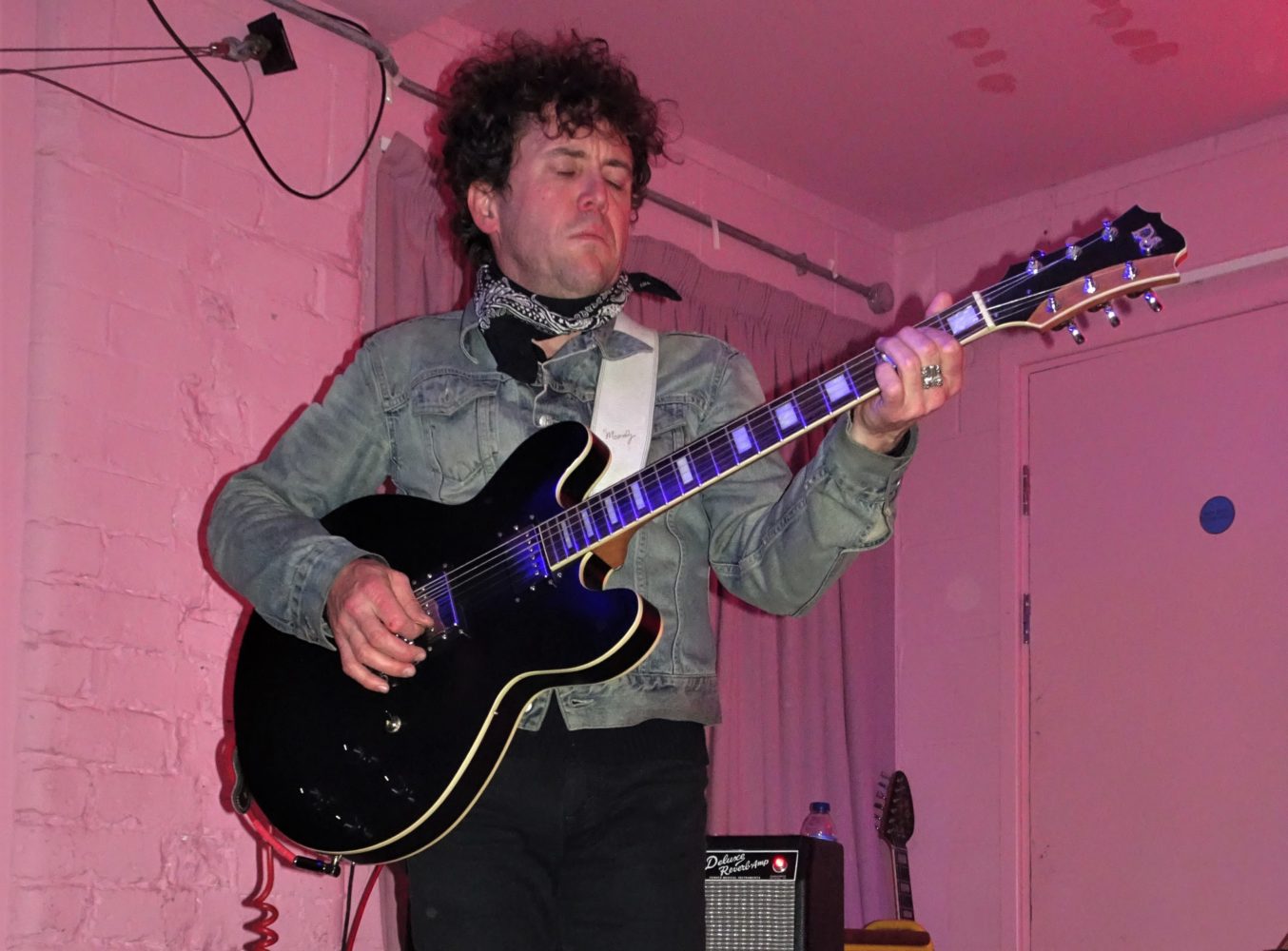 Whilst The Warlocks have not always enjoyed the critical acclaim they may have hope for or even deserved over the years, there is little doubt that their ongoing desire to defy any sense of expectation has always brought the band exposure to new audiences along the way as well as satisfying a core following who have been with them all the way. As Bobby plunders the archives of demos and live recordings to embellish their output via Bandcamp, we are told that their ninth studio album has already been recorded and ready for release next year with what Bobby Hecksher describes as some of the best material they have ever done. It appears that the phoenix is once again rising for these angry demons from the psychedelic underground. And based on the Warlocks performance tonight, long may that continue.