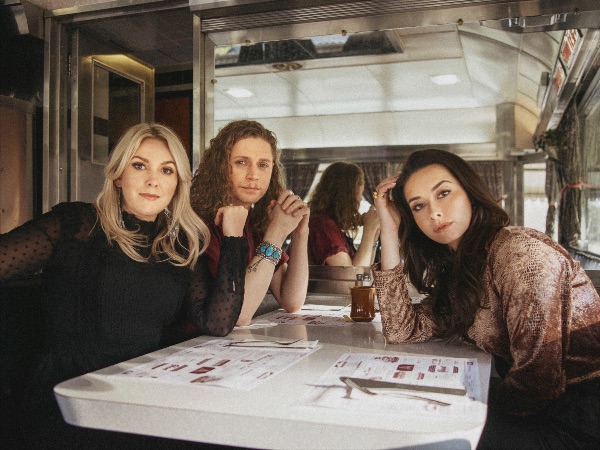 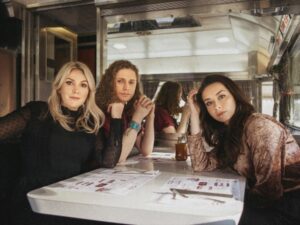 After shooting to the forefront of the UK Americana scene with their debut album, The Wandering Hearts headed to Woodstock at the start of 2020 to work on a follow-up.

Tim Cooper talks to the London trio about the perils and pleasures of making their latest album in lockdown in the spiritual home of Americana.

Deep in the Catskills, producers Simone Felice and David Baron hosted experimental and spiritual sessions in a studio packed with vintage instruments. The result is their forthcoming self-titled album, released on 6 August by Cooking Vinyl.

Displaying influences from Fleetwood Mac and Simon & Garfunkel to First Aid Kit and The Lumineers, the slimmed-down trio have made an album that celebrates life, new beginnings, and striving to shine through a darkening world.

Tim Cooper caught up with the band – a trio of Tara Wilcox, A.J. Dean and Francesca ‘Chess’ Whiffin since the departure of founding member Tim Prottey-Jones in early 2019 – to talk about the album and its background.

How has the past year (lockdown) affected you mentally, emotionally and physically?

Tara: I think to start, it was just a really overwhelming time for us all. A lot of disbelief and fear. But with time, I think it’s allowed us to focus on ourselves a little more. We’ve taken time to slow down and there has been real value in that. For most of last year, the most exciting thing I could do was take a walk, and being out in nature is so good for all of us. It’s a tonic. We’ve also been able to check in with family and friends a lot more and invest in those relationships. I think when life gets back to ‘normal’, having been able to invest not only in ourselves but our loved ones will put us in the best place to make the most of every opportunity afforded to us.

Did you find the lockdown stifled your creativity or that it inspired you to write lots of new songs? How was it as a band being separated from each other?

Tara: It was tough being apart from one another, particularly as we’d just spent early 2020 on a huge journey to finish our album. It had been full-on every day and a joy to be doing it together. To then come home to such an unknown entity was a shock to the system, to say the least. Songwriting during lockdown was tough – the news coming in from around the world was terrifying and writing became really hard. The through line of every song seemed to be the same. With time though, that shifted and as the light was starting to shine at the end of the tunnel, writing became easier. I do miss being in the same room as everyone though! Zoom is such a gift at these times but nothing beats being in the same room as people who you want to create with.

How have you evolved as a band from this record to your first? Do different things inspire you to write now than on the first album?

AJ: There have been a lot of changes between this album and our first, some more noticeable than others. When we made Wild Silence, we hadn’t been playing together for very long, the collaborative writing experience was mostly a new one for us all and we were just finding our way with our sound. It was really getting the songs on the road and playing them to live audiences where we found our own different connection to the songs, as they’d taken on a new life when we performed them. That then began to influence the way we write and the more comfortable we became with the music and one another, the more we were able to explore themes and avenues that we wanted to write about. By the time we were recording our new album, we had gotten to a really good place and everything just flowed so much more organically. We found that we had this creative freedom we perhaps hadn’t quite realised before. So maybe different things do inspire us now but only insofar as the world moves on and there are always new things to think about. The real revelation came when we realised how we are better placed to respond to that inspiration.

Can you share some stories about the new record and the making of it?

AJ: Haha, there are plenty of stories surrounding the new record – some more, some less exciting than others! The process is obviously a fairly long one, from the writing, to all the decisions about what the record is gonna be, right up until the point of recording and then beyond. The stars aligned and recording in Woodstock with Simone Felice and David Baron was incredible. One of the best things about Woodstock, other than working with the dream team, was that we had an awesome house that had an array of instruments so every night after recording, we’d go home, make dinner and jam whatever song we were recording the next day. Effectively, there are YEARS of stories to go through with this album but suffice to say, we had a truly magical time making this record and the work that everyone has put into it has made the whole thing a story worth telling.

And can you share some stories behind specific tracks with us?

Chess: Dolores came about after I read an article in Rolling Stone about the life, career and tragic death of Dolores O’Riordan from the Cranberries. I knew their music but had no idea about her story. When I arrived at the studio for our writing session, I shared the story with everyone and the song came pretty quickly, inspired by the article and also by a line that Tara’s mum would often say to her: ‘Everyone’s fighting a battle that you know nothing about, so be kind’. It seemed to sum up how we all felt and really hit the nail on the head with the positive message we hope to put out there with this song. A reminder to ourselves and to others to be kind.

The other song that springs to mind is Dreams – it’s a pretty cool story! Back in 2018, Marty Stuart invited us to Tennessee to play a few shows with him – those shows just happened to be his Late Night Jam at the Ryman Auditorium (our international debut!), The Grand Ole Opry, and Graceland. It was incredible, we were on such a high. Marty called to see if he could stop by our place as he had something for us. He turned up with his Mum, who is the most incredible woman. She took up photography in her 80s and brought us her book that had just been published. So cool. Then Marty pulled out this piece of paper and said he had a song for us that he and his wife Connie Smith had written. He sang and played us Dreams and we instantly loved it. Fast forward to early 2020, we partly recorded Dreams at the Premises Studios in Hackney, then after finishing the rest of the album in Woodstock, we headed to the Cash Cabin outside Nashville to meet Marty, where he was not only going to hear our version of the song for the first time but also record his guitar and mandolin parts for it!! Wow, what a ride. We have just released Dreams and we are so honoured and lucky to have a friend and mentor in Marty Stuart!

How do you feel about getting back to playing live music? Any specific venues or festivals you’re looking forward to playing?

Chess: Well, I’m telling you now, I am going to be an emotional wreck!!! It’s going to be so overwhelming but we can’t wait to get back out on stage. I’m looking forward to playing anything!!!!! We have our UK tour in August/September which was booked for last April so that will be amazing to finally get to do! And fingers crossed, we’ll be heading back out to the US to play some shows that got postponed last year and hopefully, a few new ones. We can’t wait to all be back together again and on the road, doing what we love.

The self-titled album will be released on 6 August on Cooking Vinyl, on CD, LP, cassette and download. Listen to the album here.

23rd – Southampton, The Brook (SOLD OUT)

All words by Tim Cooper. You can find more of Tim’s writing on Louder Than War at his author’s archive and at Muck Rack. He is also on Twitter as @TimCooperES

The Wandering Hearts can be found here: