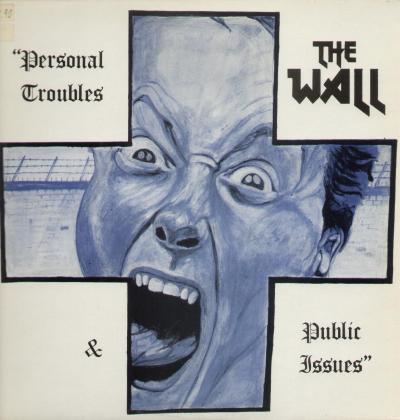 First time re-issue on CD for the 1980 debut album by Sunderland band the Wall, plus bonus tracks from the “Ghetto” and “Hobby For A Day” singles….Ian Canty looks at the unsung Punks of ’78

Though a lot of people will tell you that Punk was all over by 1978 after the Pistols split up, the fact remains that a huge amount of the best Punk records were released after that time. Off the top of my head, how about that tremendous run of singles by the Ruts from 1979-80, “Sound Of The Suburbs”, “Ambition”, “Action Time Vision”, “Bloody Revolutions”/”Persons Unknown”, the Rejects and the Cravats thrilling first records, the list goes on and on without even thinking about what was happening in the US with the early rumblings of hardcore. Yes I know some will say these days that this all comes under the heading of “Post Punk” but to me at the time it was part of the same thing, for instance I liked the Banshees, PIL and the Subs equally with no line of demarcation. “Post Punk” these days is just journalistic shorthand for “good old music” just as “Pub Rock” is for “bad old music” and the phrase meant nothing to me back then. Anyway enough of that and onto the more pressing concern of the Wall and their debut album….

The Wall emerged from Sunderland in the first few months of 1978, the “Punk Is Dead” time, with an early line up headed by Ian Lowery and band mainstay Andy Griffiths. Making quick progress with the “New Way” single on Small Wonder, they moved to London, tweaking the line up with Rab Fae Beith and Nick Ford coming in on drums and guitar respectively. This version of the Wall would only last for one record, a follow up which was produced by Steve Jones, entitled “Exchange”. Between this activity and the making of the LP we have here, Ian Lowery left and was replaced by ex-Ruefrex vocalist Ivan Kelly, Lowery going on to Ski Patrol and then the wonderful Folk Devils whose work must be reissued one day. Andy Forbes also came in on second guitar (but didn’t stay too long) and the band shifted to Fresh for this album and the accompanying single releases “Ghetto” (Jimbo Pursey’s production dabs on this one) and “Hobby For A Day”.

On “Personal Troubles” the Wall specialised in an anthemic, slighty gothic version of the sound of 77. More thoughtful instrumentation set them apart from the coming UK82 wave: indeed “Storm” is almost a ballad, giving the big-voiced Kelly a chance to stretch out in a Dave Vanian-like fashion and “Unanswered Prayers” is a more of a well judged piece of New Wave than anything more hectic. They were obviously moving away from their pure punk roots though keeping their fast-paced attack on occasion but “Delay” even sports of strong Who influence, which probably wouldn’t have gone down too well with the Exploited “Punk’s Not Dead” crowd. Not that the Wall were bothered, though a supercharged version of the “Ghetto” single is a classic piece of late period Punk with a raging chorus and thunderous drums, they were putting together here a proper LP with depth rather than re-tracing the steps of the bands that immediately preceded them.

This version of the Wall splintered not long after this record came out in the Winter of 1980 and a revised line-up issued the “Hobby For A Day” EP (the lead track featuring on the “Punk And Disorderly- Further Charges” comp) in 1981. A switch to major label Polydor followed and then further releases came on No Future before the band finally called it a day in 1983.

“Personal Troubles And Public Issues” captures a moment in time perfectly – when Punk bands emerged blinking into the sunlight the morning after the party finished and tried to make some kind of sense out of the Post Punk years. Caught between the first Punk explosion and the hardcore resurgence of 1982 The Wall on this LP attempted to bridge the gap through energy, inventive playing and good tunes. Perhaps they may have fallen between two stools, but they did so in an elegant manner.