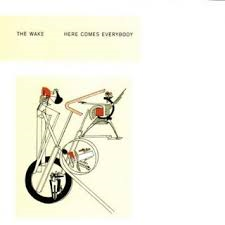 The Wake – Here Comes Everybody

35th anniversary crystal clear vinyl edition of the second album by Glasgow band the Wake, which was originally issued on Factory Records back in 1985….this special edition includes a download copy of the LP and a 7 inch combining single a-sides Talk About The Past and Of The Matter…..Ian Canty gets a mid-80s wake up call….

The Wake from Glasgow were one of many lesser-heralded Factory bands, resigned to mostly playing second fiddle to New Order and ACR. But they did have a pretty decent career with the label, issuing two albums and four singles (the first of which, Something Outside was for Factory Benelux) over a five year period. Led by Gerald “Caesar” McNulty, who had been in Altered Images early on, the initial Wake aggregation was completed by the rhythm section of bassist Joe Donnelly and Steven Allen on drums. After relatively few live shows they put out a single entitled On Our Honeymoon on their own Scan imprint in 1982.

Soon a young Bobby Gillespie, who had helped out with the single’s b-side Give Up, replaced Donnelly and Steven’s sister Carolyn joined on keyboards to bring them up to a quartet. Having made as much headway as they could locally, they began to look further afield from the Scottish scene, sending a demo tape to Factory Records in the hope of a deal.

Luckily enough Rob Gretton was suitably impressed and invited to the band to Strawberry Studios in Manchester to record their debut mini-album Harmony in spring 1983. This record was greeted favourably in the music press, particularly by Dave McCullough in Sounds, who described them as “somewhere between Transmission and Glittering Prize”. The Something Outside/Host 12 inch single followed and the Wake started to make a mark nationally. After a John Peel session in July 83, Gillespie was ejected from the band, feeling his focus was on other projects including an embryonic Primal Scream. Alexander Macpherson came in as his replacement, but the band was back down to the core trio of McNulty and the two Allens by the time Here Comes Everybody was released.

One of the most interesting things about the Wake circa Here Comes Everybody is that they provide almost the perfect link from the post punk that was to the coming indie pop wave that would result in C86. Lead off track O Pamela is full of bright but gentle wonder, the surge of synth and jangle being balanced out nicely by near-dance beats. I liked the little dub inflections that are present on Send Them Away, the bass truly making its presence felt by busily bubbling around the vocal and electronics.

Sail Through again has a cracking bassline, more pop this time though with a neat shuffling rhythm. The final track on side one of the album Melancholy Man has an almost “Sci-Fi Shadows” sound to the guitar, the voice taking a long time to emerge from the ethereal synth washes.

Side two kicks off with the pacey harmonica-driven World Of Her Own, a song to an unnamed, unattainable beauty. This one combined with the jazz-inflections of the following Torn Calendar represent as near to the mainstream as the Wake would get. Even so, these both maintain the fresh feel of mystique that makes Here Comes Everybody so beguiling. All I Asked You To Do nears electropop, but the guitar glide takes it away from being a mere genre piece.

That’s the joy of this record in a nutshell – as soon as you think you have worked it out, it shape shifts to something different. The title track finishes things off with a flourish, strings-sound fading to the buzz of guitar, before paring down to a vocal and percussion on the verses, before the rush of guitar of the hook/chorus. There’s some finely judged female backing vocals from Carolyn here and on Torn Calendar too, she shows up as a real asset to the band here. Here Comes Everybody made a dent on the indie charts of the time, but the Wake deserved better than being marked down as Factory also-rans, which I’m afraid was pretty much the case.

The seven inch single which pairs Talk About The Past and Of The Matter, presents a different, more intense side to the band. The former effort is powered by an ample dose of post punk funk guitar, with piano from Factory labelmate Vini Reilly easing things along a little. Of The Matter coasts with bright bells opening up to a driving rhythm. Though these single tracks wouldn’t naturally sit with the album itself, having them as a separate disc makes sense and is a nice bonus.

After ending their associating with Factory the Wake found a home at Sarah Records, where they recorded a further two albums Make It Loud And Tidal Wave Of Hype in 1990 and 1994 respectively. All was quiet until the A Light Far Out LP emerged on LTM in 2012, which was accompanied by some live shows. Reissues have continued to appear, with this one originally intended for Record Store Day 2020. Maybe the Wake will reappear soon to support this release? It is a long shot but one can only hope, because Here Comes Everybody shows a band very much in their element, softly but very definitely standing their ground, daring to be different from the rest.