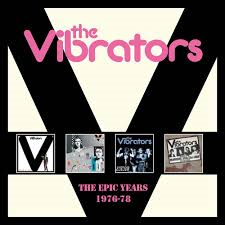 Epic might refer to a record company in this case, but either way it is apt. The Vibrators were there at the 100 Club shebang, when UK Punk really kicked off in earnest and by some distance were the band there with the least street credibility. They were not teenage hellions bent on bringing anarchy (being in their middle twenties at the time of the gig) or harbingers of Post Punk. They never had the outrage of the Pistols or the politics of the Clash, or seemed portents of the future like the Subway Sect and Banshees. They also did not possess the crazed mayhem of the Damned or the spiky intellect of early Buzzcocks. So what did they have, apart from a murky past in Rock N Roll (Bazooka Joe, the main act at the Pistols first performance, with a young Stu Goddard aka Adam Ant on bass) and Glam groups?

Well in Ian “Knox” Carnochan they had a talent who could write amphetamine-paced Pop pearls which captured 70s London low life in all its dowdy grime. Using a basic template of Lou Reed/VU and giving that a huge boost in pacing, the Vibrators reflected the desperate search for something approaching “life” in the capital not swinging as in the ’60s, but dangling by a thread from total shutdown. Now there is a tendency to regard anything that isn’t actually ahead of its time as somehow inferior, but making a sound that is right on the money isn’t necessarily wrong. In the Vibrators case the music they made in 1977-78 fitted perfectly with the times – that they didn’t provide anything that “new” is a side issue – they were bloody good at what they did, which is the point. Despite somewhat of a false start with the Chris Spedding collaboration/cash-in Pogo Dancing and their own We Vibrate (neither included here as they were recorded for Mickie Most’s RAK imprint, though We Vibrate does make the cut in a Peel Session take of the song), they soon zoomed into the future.

As the Punk image swarmed from the cities into the towns and villages that made up rest of the country, usually via ‘Shock Horror’ media reportage, the Vibrators didn’t seem that different from the pack. In the sleepy market town I was raised in, the manager of a local record shop put the Pure Mania sleeve prominently in the shop window, with the usual appalled reactions from the easily offended pillars of the community (was the whole of decent society in 1976 merely a Bill Grundy tribute act?). Me, a young kid, well I thought it was great and made me start to follow the band and this whole Punk Rock thing with interest. Along with the media coverage and the Adverts’ stunning Top Of The Pops appearance to accompany their hit Gary Gilmore’s Eyes, their local notoriety (having never to my knowledge set foot in the town) are what hooked me on this damn noise for better or worse.

It might not sit well with the ultra-cool elite, but that first LP is a pure 1977 classic: fast, exciting, stuffed full of memorable tunes and it never stays in one place long enough to get boring. The songs that Knox had carried from his days in his Glam-era aggregations Lipstick and Despair like Whips And Furs and Sweet Sweet Heart were given a huge increase in velocity and let loose at the exact environment they suited. Nasty, fast and violent, the Punk of 77. Baby Baby Baby may sound now like a typical yearning Rock anthem, but it really connected with the Punk Rock crowd as ‘a little of your time’ was all that could be spared, such was the intense rush of that year. Pure Mania is still the sleazy, bad attitude hit of the year.

The live CD which is also included in the box documents a sweat stained July night at the old Marquee just after the debut album came out and revels in the amphetamine blur of the times. The sound is good and when someone shouts at the start ‘going to get crazy’ you know it will. Pre-empting V2 with Flying Duck Theory (‘music to screw by from a tune on the radio’ possibly the ultimate Vibrators lyric) and Wake Up with Into The Future re-titled as Sex Kick, the Vibes here are a machine, spitting out fast paced but precise nihilism – blank, simple, perfect. For proof just listen to the pile-driving solo on the then unreleased He’s A Psycho – pseudo-dumb, but meticulous in its execution. There’s even a brief look back to their hesitant beginnings at the 100 Club with the Stones’ Jumping Jack Flash souped up to meet the Blank Generation’s particular needs.

However, changes were definitely on the horizon, as Old Father Time hoofed 1977 out the door. In the brave new world of 78 when Punk looked washed up after the Pistols split, the Vibrators pulled of the enviable trick of managing to go with these changing times, by mainlining their bad style to a tacky but appealing plastic New Wave image. Authenticity was over-rated anyway: what counted in the final analysis was the noise you made and the Vibrators, resplendent in lurex and wraparound shades, bashed out a beguiling disposable Pop racket on V2. With Gary Tibbs coming into replace a Boyfriends-bound Pat Collier, the Vibrators attacked the new year with gusto.

This LP even spawned a hit single in Automatic Lover (the non-LP Judy Says also made the lower reaches of the Top 75, both sides appended to this disc), but listen to the section of Pure Mania where they chuck every audio effect imaginable on top of their standard speed Punk to make for pure 1978 listening – the speed of the hand defeating the eye, or ear in this case. The pace only really lets up on the churning drone of Troops Of Tomorrow (later covered by the Exploited – make of that what you will) and a slight country hue to the Sweet Jane vibe on Fall In Love. It is smart, snappy and fun, particularly the daft, semi-choral mid-section from Wake Up and Flying Duck Theory. V2 is irrepressible Pop music of the time and can tell you much more in its grooves about Britain in 1978 than any BBC4 multi-part documentary.

The BBC disc presents us with a case study of the band’s rapid evolution during the two year period documented. The October 1976 Peel session finds the Vibrators still struggling to distance themselves from their Pub Rock and Glam roots and the version of Sweet Sweet Heart sports a decidedly Old Wave guitar solo. Whips And Furs gets retitled Dance To The Music presumably to prevent upsetting Auntie Beeb and Jenny Jenny is just an out and out old style Rock ‘n’ Roller. The dumb sub-Ramones posturing of I’m Gonna Be Your Nazi Baby does display their stuttering shift into New Wave shock tactics, but the much slower pace to all these tracks show a band in development, edging uncertainly towards the future.

Such doubts had been totally expunged by their return visits to the BBC in June 1977 and March 1978. These selections are archetypal Peel sessions – professionally laid down but unadorned, straightforward versions of the (at the time forthcoming) album tracks, put down with the kind of powder-keg energy that makes you think they were worried it would all fall down around their ears before they got to the end of the songs.

It’s worth noting that this differs from the Captain Oi! release of 2000, in that the In Concert portion of that disc has been replaced by four offerings (in audio only) recorded for the “Old Grey Whistle Test” in 1978. Though the music media were trotting out Punk is dead at the time as far as TV was concerned it only really started then, with Whistle Test carrying on like nothing happened since 1975 until after 1977 had been and gone. The Vibrators had a hit with Automatic Lover and were offered a spot, which they used to turn in hot versions of Wake Up and 24 Hour People (Shaun Ryder may have come across V2 somewhere along the line) among others. They had skipped through 1977 to 1978 surfing trends and avoiding potential pitfalls admirably.

Such fleet-footedness was unsustainable and come 1979 the Vibrators found themselves hopelessly adrift in a world of Two Tone, Gary Numan and the Mod Revival. Knox chose to bail out for a solo career and though they subsequently reformed time and again over the years (actually the 1978 line up are playing the Hope and Anchor soon), it would be these two years that defined their art.

Whatever your opinion of how “cool” the Vibrators were or the veracity of their later efforts, the fact is that during the brief timespan documented on this compilation box, they produced two near flawless albums that captured the time and place perfectly. The Peel sessions show their metamorphosis from Pub Rock chancers into genuine speed Pop Punk contenders and the live disc demonstrates that they were a hot ticket live too in the Summer of Punk. Though the Vibrators went onto record many LPs over the years, most of what anyone would really need is on this box. Regardless of credibility, this as valuable a document of the era as most and the Punk Power Pop the Vibrators set down all those years ago still shines brightly in 2017.