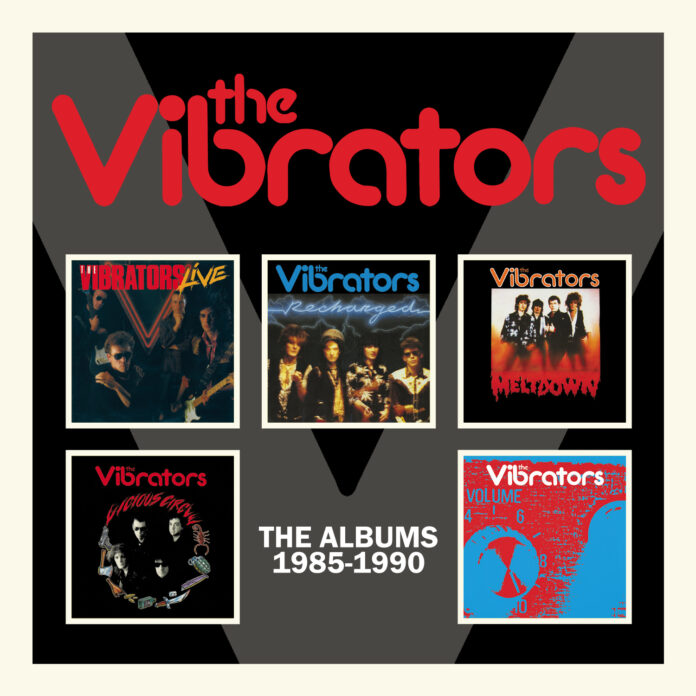 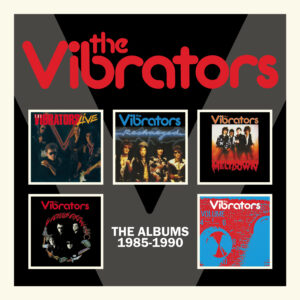 Five CD set rounding up reformed punk veterans The Vibrators’ albums from the latter part of the 1980s to the dawn of the new decade. This collection goes from their first live LP that was issued in 1986 to Volume Ten from 1990…Ian Canty checks whether he is still picking up a buzz…

As the punk scene of the early 1980s fell away towards the middle of the decade, the reformed version of The Vibrators gamely stuck at it. Pat Collier had left the line up by this stage, going back to a studio career which would prove evermore fruitful as the years passed. Original members Ian “Knox” Carnochan, John “Eddie” Edwards and John Ellis brought in studio engineer Noel Thompson to play bass on the first disc of this set, the Live album which came out in 1986.

The sleeve booklet offers no other detail as to where and when Live was taped other than stating the LP was recorded in London and Germany. The use of a studio bod as a bassist could make the more cynical among us suspect it was one of those “live in the studio” collections that were briefly fashionable among older punk bands at the time. However it certainly sounds “live” and in lieu of any counter information, we will have to take this record at face value.

Here The Vibrators here run through some old favourites from the 1970s heyday and a few newer items, starting with the hit single Automatic Lover and Amphetamine Blue, which was part of the first album Knox and members of Hanoi Rocks recorded as The Fallen Angels. A run of less than memorable songs taken from the Alaska 127 and Fifth Amendment albums slows things down a bit, but old classic Baby Baby and a pounding Troops Of Tomorrow help to get the record back on track.

The second half of Live is in effect a run through some of the high points of their old material and you can’t really miss with the quality of songs like Sweet Sweet Heart, Whips And Furs and Keep It Clean (which they milk a bit, stretching it out with some audience participation). We also get a hearing of minor hit single Judy Says. Live isn’t essential by any means, but it is on the whole pretty enjoyable fare.

It was just under two years before the next Vibrators collection, this time a studio LP entitled Recharged, which appears on disc two of this set. John Ellis had left and would spend some time as part of the post-Hugh Cornwell version of The Stranglers. Knox and Eddie were joined by bass player Mark Duncan and guitarist Mickie Owen for a record that was frankly light of real thrills and a pale shadow of their former glories. It is not that Recharged is out and out awful, it’s just so underwhelming.

Knox sounds like he is sleepwalking through the leaden beat of opening track String Him Along, when real impact was sorely needed to attract the attention of the uncommitted. A riffy Hey Little Doll does retain a hint of The Vibrators’ street rock suss of their earlier days and Go Go Go is a decent heads down rocker, but elsewhere there’s not too much to recommend. The folk rock of Every Day I Die A Little is heartfelt but pretty ropey, with nothing else making an impression apart from the Velvet Underground-influenced sound of Someone Stole My Heart. There is one bonus track included on this disc, a live run through of Disco In Moscow that was recorded around the time of the Live album. This probably would have made rather more sense as an extra on disc one.

I suppose the smart thing for The Vibrators to have done would have been to take their time developing better material for their next recording. But they were back in November of the same year with the thirteen tracks that make up Meltdown, which is the bulk of the third disc here. I can remember buying it at the time and feeling quite disappointed, but I was prepared to let bygones be bygones and give it another chance. Office Girls has a reasonable bounce to it and is quite catchy, though lyrically it is possibly not their finest hour. The nondescript r&b of Don’tcha Lean On Me tempers one’s hope of improvement though and both So Young and Speedtrap edge the band ever closer to MOR.

The Other Side Of Midnight gets off to a good, near psychedelic start that it doesn’t quite maintain. Even so, it is still one of the more imaginative items present. U 238 tries to fly like The Vibrators of yore, but is hamstrung by the drum sound which just trudges along. The frankly awful Letting You Go is the low spot on a Meltdown, as the LP does rally a little afterwards. All pretence to punk dropped in favour of straightforward rock & rollers Danger Street and Let’s Go, but both are fairly ok. Baby isn’t a bad go at the kind of speedy new wave Knox and Co used to specialise in, but Meltdown ends with the damp squib of The Sally Gardens. The extra offering on this one is Wasted Life (not the SLF tune), styled much like Baby Baby if it had a parping saxophone.

In less than a year they were back in October 1989 with Vicious Circle. You’ve got to admire that sort of persistence. Owen had left by this point, with Nigel Bennett from The Members and Inmates guitarist Tony Oliver joining up. At least Vicious Circle gets off to a flying start with the upbeat sound of No Getting Over You. This number isn’t any great shakes, but at least it gives the record a burst of momentum. This continues on the fuzzy buzz of Poll Tax Blues, before the standard pop/rock of I Don’t Wanna Fall stamps on the brakes. Another lull comes before the cover of The Flamin’ Groovies Slow Death, a pretty faithful version but you would have to go some to top the original.

Fire starts the second half with a little conviction, but apparently their record company Revolver thought the throwaway version of Billy Fury single Halfway To Paradise had hit written all over it. All I can say is it isn’t any real mystery that singles released by Revolver never set the charts aflame in the 1980s. A run of undistinguished efforts bring Vicious Circle to a close, with only Don’t Trust Anyone having much in terms of real fire. One has to recognise that it is a slight improvement on the previous two LP though. The sole bonus track present is chugging street rock of Drive, the flipside of Halfway To Paradise.

On the final disc of The Albums 1985-1990 we have Volume Ten, which continues with some encouraging signs. The pure, simple pop of Hey Girl isn’t anything special but pleasant and catchy enough and Hot For You has plenty of energy and good guitar work. The Buddy Holly cover Rave On seems a little hackneyed though, but Out Of My System is nice and jangly, almost indie pop in fact. After that the LP goes into a bit of a trad-rock run of well performed but middling material.

However, Rain Time is a fair pop/rock effort and Don’tcha Know Now goes about its business agreeably and with a touch of vim in the delivery. Can’t Have It All is fast and convincing despite a full-on heavy metal guitar solo and final offering Commanche has a soupcon of Troops Of Tomorrow’s relentless stomp. The sound is generally fuller on Volume Ten, something that plays to the band’s strengths.

It is obvious to say it, but this is a set for the completist fan of The Vibrators. Others would be better off with the first boxset from 1976 to 1978 (reviewed here) and if they like that, checking out the 1979 to 1985 set (reviewed here) does contain some interesting stuff. This is very much the lesser of the trio.

The Live album is quite good fun and the best tracks from Recharged, Meltdown and Vicious Circle put together might make a reasonable album, but as collections in their own right they are very hit and miss. Volume 10 is by far the best studio collection here, but even that doesn’t really get anywhere near to Pure Mania or V2. One has to commend The Vibrators though for not simply resting on their laurels and four studio albums in four years is a testament to their industry. The Vibrators The Albums 1985-1990 is at least proof of a solid work ethic and the artistic need to create.