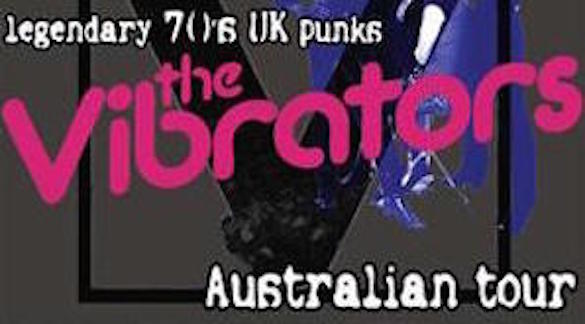 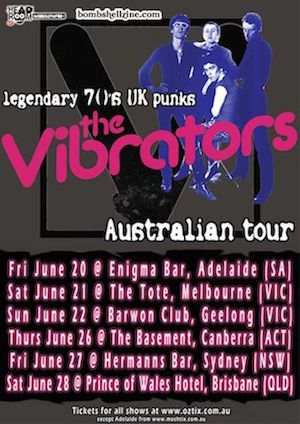 Punk rock veterans The Vibrators have been on their punk rock musical journey since 1976. Last week they arrived in Geelong South, Australia, and blew the citizens of said city away with a long and, it appears, a seemingly tight show. Louder Than War’s Marc Brekau was in the audience, carry on reading for his review.

For this aging punk rocker, Sunday nights in winter are usually spent indoors surrounded by good food, flowing red wine and placating the family demands. Except when bands like The Vibrators hit town.

Suddenly domestic arrangements and diaries change as journeys to far-flung cities are made in search of punk rock edification. Well, perhaps that’s slightly melodramatic, for Geelong is Victoria’s second largest city and only 43kms from my front doorstep, yet still a hike given it’s a cold, wet and Sunday.

Tonight The Vibrators play a stalwart among the city’s limited and thriving live scene, The Barwon Club Hotel. Located across from the local footy stadium, and away from the main pub and club drag, TBCH affords 1970

s decor, a small bar and corner stage to provide an intimate eye level experience with tonight’s headline band. Superbly priced at $20 plus BF, and despite costing $22 in fuel to attend the gig, it’s terrific value given the bands exceptional punk heritage and live reputation.

However, I confess to a global punk rock crime, for despite long standing genre associations I hold almost no knowledge about the band itself. Nor do I own any of their significant musical output, and while I’ve had the good fortune to interview both Knox (superb musician and lovely chap) and Pat Collier (lovely chap and owner of Maida Vale Studios) recently, my conversation knowledge about the mighty V amounts to no more than a two minute speed date. Even then I’d probably be lost for words and dumped after 30 seconds or so. Oh the shame, the shame…

Thankfully, tonight I repent my sins alongside a small and vocal crowd, the size reflecting the challenge touring bands face in playing regional cities in winter, and on Sunday. Last night the band played to a sell-out crowd at The Tote, and I later find the promoter, or someone connected with them, has put the band up in Geelong tonight, meaning the location makes perfect sense despite the aforementioned observations.

Tonight’s support are varied, with a 5:30pm start and long journey causing me to miss “not for profit” fundraisers Wolfpack. I catch a tune from Batpiss before talking to Eddie and Darrell, a rare privilege given my previous confession. After meeting someone with Eddie’s heritage and knowledge, and listening to his recollections and experiences, I suddenly realise how limited my own travels and experiences have been by comparison. Compared to my own family, I’ve achieved a lot, but compared to Eddie, well he’s achieved more in a year that I’ve achieved in 10! Oh the shame, the shame…

The Vibrators take stage around 8:45pm and launch into Bad time, Pure Mania and Yeah Yeah Yeah in quick succession, before acknowledging both city and crowd. I Need A Slave and Whips and Furs follow as Eddie furiously keeps beat, resplendent in his trademark England St George Cross tee as he exchanges vocal duties with Pete across the set list. Both musicians demand the crowd move closer before launching into Troops of tomorrow, which gets them moving. Sadly there’s no mosh pit, more drunken jerky movements and funny bum shaking, which is fine tonight as they launch into Richard Berry / The Sonic’s exceptional Have Love Will Travel, a perennial fave taken from the Garage Punk album (for a turbo-charged local rendition of this song, check Melbourne band The Olympic Sideburns 1980’s version on Youtube. It rocks!)

By now I’m converted to the V fold, and remain impressed by the trio’s fast-paced, tight arrangements and breadth of material that blends punk, 60s garage, rhythm and blues and even pub rock, an eclectic mix across the genres without making their set seem similar and familiar. On stage bassist Pete Honkamaki is visually brilliant, tall and lean, sporting an array of tatts across his arms and donning black clothing and supporting bling to complete his appearance. I watch with envy, for if I was wearing the same clobber I’d look out of sorts, but on Pete they appear picture perfect. Damn and blast, if only I was half a foot taller, and far less portly, perhaps I could pull it off!

Eddie’s drumming abounds with gusto and vigour, a musician who clearly adores the profession and vocation he’s chosen in life, while Darrell stands like a blues guitarist, exhibiting strong playing focus, the occasional swagger and minus the manic body movements usually associated with punk rock. Long Beach Police and 24 Hour lead into No Way and Birdland is closed, before Baby Baby gets the crowd cheering. Judy Says (know you on the head) and another track I can’t pinpoint follows before the set ends with Kids A Mess. Darrell and Eddie exit drenched in sweat, but Pete seems void of the wet stuff. Two theories come to mind, he’s either surgically removed his sweat glands, or the Finns don’t sweat like us English and Aussie types.

After a brief exit the band return for a four song encore which tests my limited knowledge, but did include My Stalker, sung by Darrell and previously recorded with Eddie Spaghetti and Dan ‘Thunder’ Bolton from a band I do know something about, the exceptional Supersuckers, who also play Melbourne tonight. The trio depart, leaving the crowd satisfied, and demanding I seek their CDs to continue my post-gig education. Afterwards, an old salty asks Eddie for a drum stick while clutching 7 or 8 in his hand. He reveals he collects said sticks, but Eddie only brought two pairs for this tour so he couldn’t get one from him!

With final beer in hand I realise I’ve witnessed an impressive punk rock performance. The fact Eddie remains the only original from ‘back in the day’; that Knox has vacated vocal duties; or that Eddie and Pete deliver different vocal tones to Knox, remain largely superfluous. The Vibrators are genuine punk rockers, delivering their set as intended, melodic, tight, sharp, fast, loud and proud.

To hear another contribution from Melbourne, listen to the bands blistering live studio set and Eddie’s later interview on our exceptional community radio station PBS-FM, via their radio on demand service here: pbsfm.org.au/node/36422.

All words by Marc Brekau, find his Louder Than War archive here.