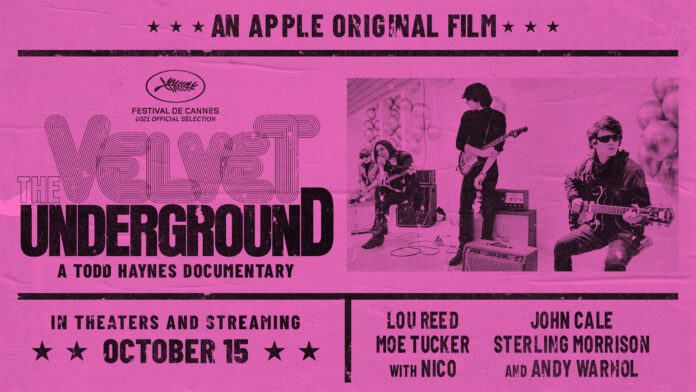 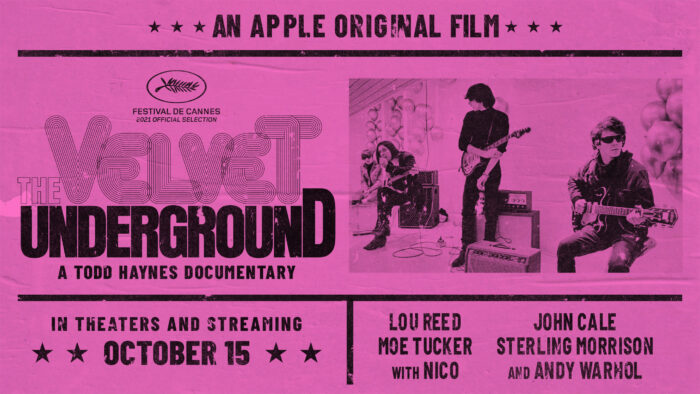 A new documentary by Todd Haynes tells the story of the dark stylists – The Velvet Underground.

By 1993, the Velvet Underground had transformed from a cult collective to a cultural phenomenon synonymous with proto-everything. The band reformed after nearly twenty-three years and their return was celebrated in the press. In a review of the reunion concert film, planned for broadcast on Channel 4, Arena’s Mark Edwards summed up the essence of the Velvet Underground in an exhaustive formula: “Godfathers of Punk. Godfathers of Grunge. Godfathers of every garage band that ever was.”

History repeats itself. The venerable band, though for some members sadly posthumously, gets another burst of exposure on the television. Planned for release on Apple TV+, the visually captivating documentary is a work by Todd Haynes. Needless to say, Haynes had been no stranger to music-related films before he started working on The Velvet Underground story, although his portfolio lists subjects and demonstrates visual elements that are more conventional than avantgarde. One of his most critically acclaimed films is I’m Not There, a biopic inspired by the life of Bob Dylan.

Relying on a minimalist split-screen mode, Todd Haynes pays homage to Warhol’s experimental films such as Chelsea Girls. The visual technique also serves to open a capsule of time and reveal deeper aspects of the band’s personalities. The footage showing a young Lou Reed is displayed alongside bits and pieces from 1950s newsreels and family photo archives. Although it is not easy to put events of the life of someone as controversial as Lou Reed in a cohesive narrative, Haynes seems to have achieved the goal.

Despite that the characters and their stories are known far beyond the circle of fans, the cultural context adds missing pieces to the already existing puzzle. The archival episode of the TV show I’ve Got A Secret features introvert-ish twenty-year-old John Cale, talking about his experience of performing an 18-hour piece by Eric Satie. A professionally trained musician and visionary, Cale became the major contributor to the Velvet Underground drone sound. In the future, this ringing otherwordly aura would become a primary source of inspiration for shoegaze bands.

Experimental minimalism of La Monte Young and aforementioned composers, an extravaganza of art movements such as Fluxus and eventually Warhol’s The Factory studio, dystopian poetry of Allen Ginsberg, austere cityscapes of New York – all these elements fed into the concept. Featuring interviews with long-term fans, the documentary celebrates the groundbreaking quality of the Velvet Underground. The founder of Modern Lovers Jonathan Richman recalls how bewitching the live shows were – it would take five seconds for the audience to start applauding. “The Velvet Underground had hypnotised them!”.

Naturally, they were misunderstood too. In the late ’60s, touring dates on the West Coast turned out the most challenging. The long-haired and hippy-inclined audience was baffled by their sophisticated rock-n-roll “off-putting aura”. “It was all about hippies and we hated hippies”, admits Maureen (Moe) Tucker. A striking drummer with a cool and mesmerising gaze, Tucker has a filmic image that makes a transition from a black-and-white shot to a talking-head format. Her impeccably androgynous look seems natural these days but probably was not as natural in the ’60s; a stark contrast to Nico who was frustrated to be measured up to public expectations of female beauty. Interestingly, the film is released a day before the singer’s birthday.

Each member of The Velvet Underground is presented with dignity. Each is an individual who seems to have exited the time machine before reaching the final destination. Both Tucker and Cale, the only living members of the original line-up, appear in the film. The presence of Lou Reed and the band’s guitarist Sterling Morrison is reconstructed by the old interview recordings. While watching this sequence of narratives, one might wonder whether there is any other way to begin each story rather than by introducing names and displaying pictures. Yet, it is gratifying that, unlike other recent music documentaries, the film tackles the subject without excess mind-wandering.

The film does not pursue the band’s reunion and, fair enough, it also omits some details that once made the headlines of national newspapers. The assassination attempt on Andy Warhol is treated visually – in the language of abstract footage, allegedly showing the artist’s torso with a scar on his chest.

It ends on a sentimental note. Sitting beside an older and frailer Warhol, Reed shows him pictures of the Velvet Underground, taken after Andy had to quit his position as the band’s manager. It was after Andy Warhol’s funeral that Lou Reed and John Cale reconciled. Some key ideas are delivered by showing rather than telling. Such an approach makes perfect sense considering that the film is dedicated to Jonas Mekas, the leading figure of American avant-garde cinema.

The Velvet Underground will be shortly available on Apple TV+.