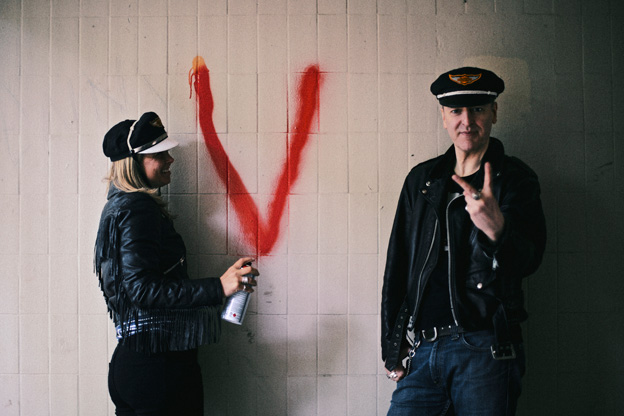 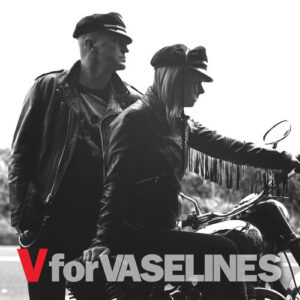 The Vaselines return with their first album in four years, a 33 minute exercise in off-kilter, salacious pop, with plenty of special guests.

‘Let’s do it, Let’s do it again,’ the Vaselines sang on the title track of their comeback album Sex with an X and here they are, four years later, still together and now more prolific than they were during the initial phase of their existence.

Inspired to get together by the likes of Orange Juice and The Pastels, it’s now amazingly over a quarter of a century since the band originally formed and signed to local label 53rd and 3rd. They’ve definitely never forgotten their own independent roots and have even recently set up their own label, Rosary Music, to release V for Vaselines, an album which, bizarrely enough, singer and guitarist Frances McKee claimed in a recent Radio Scotland interview was a mix of the Ramones and Benny Hill.

Not that you should necessarily believe everything that either Frances or her fellow Vaseline and former boyfriend Eugene Kelly say, although the Ramones influence is certainly apparent enough in the simplicity and length of the tracks, the occasional buzzsaw guitars and always memorable choruses.

Recorded in the Castle of Doom Studios in their hometown of Glasgow, V for Vaselines is their third studio album and they’re joined on it by a number of Scottish based indie musicians  including Stevie Jackson of Belle & Sebastian, Frank McDonald (Teenage Fanclub) and Michael McGaughrin (The 1990s).

It’s undoubtedly a solid team and from the moment Frances and Eugene kick off the album with some ba-ba-ba-ba-bah-ing on High Tide, Low Tide, you immediately sense you’re in safe hands. This track, their current single, is a slice of buoyant and breezy indie pop with something of a surf feel, some irresistible guitar hooks and engaging boy/girl vocal interchanges.

Here they are looking more Psychomania than Sons of Anarchy as they have fun in the sun (and rain) on the seafront of the small Scottish coastal resort of Largs:

A majority of the following nine tracks stick to the same template as the opener. There’s no experimentation on display here, no temptation to bring in, say, some motorik drumming or utilise disco rhythms; instead the band stick to what they’re very, very good at and what basically attracted the adoration of their most famous fan.

Yes, like just about every other post-Nevermind review of the Vaselines, it does seem almost compulsory to point out, just in case you don’t know, that Kurt Cobain described them as ‘his favourite songwriters’ and that the female mainstay of the group is very likely to have been the inspiration when Kurt and Courtney decided to name their daughter Frances.

It’s interesting to speculate why Kurt admired their songs so much that he insisted on covering three of them; superficially The Vaselines and Nirvana could be bracketed together as alternative guitar acts who also shared a desire to stick to their principles in a business where this isn’t always easy. In many ways too, though, they’re also complete opposites. While Cobain often came across as shy and world weary, Frances and Eugene have always appeared to be two naturally angst free individuals who take great delight in poking fun in their songs at a range of subjects such as religion and scattering sexual innuendo across their lyrics: it’s not hard to imagine Kurt enjoying and maybe even envying their tongue-in-cheek humour and joie de vivre.

If I had to guess what most drew Cobain to the Vaselines, I’d say, rather than their integrity or irreverence, it would likely be the naive or even child-like quality of their early output, songs with the kind of off-kilter structures that more ‘sophisticated’ writers would never think of employing.

Admittedly, the pair have become less salacious lyrically of late (unless I’m missing out on something) and almost inevitably the passing of years means the duo aren’t quite as ramshackle as previously but on tracks here like Inky Lies and Crazy Lady (which might just refer to Margaret Thatcher) they’re still recognisably the same band that recorded Molly’s Lips, Son of a Gun and Jesus Wants Me For a Sunbeam. Their new songs confirm that the Kelly and McKee partnership still possesses the enviable gift of making the writing of infectious tunes appear almost effortless. Even on the first couple of plays I was already able to hum along to most of the new material as if the songs were old favourites. 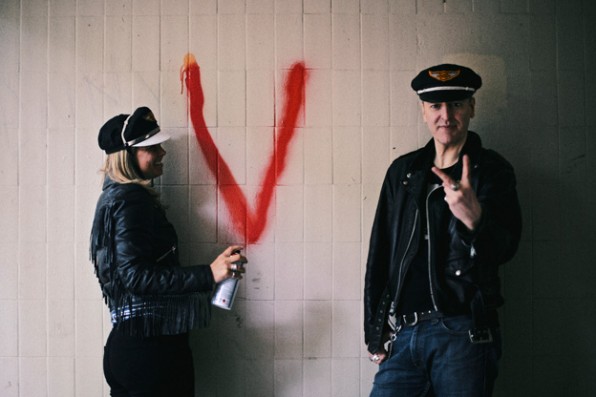 Single Spies slows things down to a much more languid pace and is a real album highlight with a bittersweet feel and lovely harmonies. Featuring some urgent guitars, One Lost Year cranks up the tempo again and is maybe the catchiest track they’ve recorded since reforming. I bet you’ll tap your toes to it, as you will to Earth is Speeding (which in places recalls their old C86 era pals the Shop Assistants), False Heaven and Number One Crush.

The start of track ten, Last Half Hour, borrows Hal Blaine’s classic Be My Baby drum intro and then its chorus echoes Sloop John B with traces of the Velvet Underground thrown into the mix albeit still somehow manages to sound like The Vaselines. It’s another slower number with a dreamy but melancholy feel and is the ideal way to conclude V for Vaselines; as P.T. Barnum once said, ‘always leave ’em wanting more’.

Here I should point out that this is a lean collection of songs, not that I mean that as a criticism as I’m a guy who believes that life’s too short for fillers.

This latest album keeps up the high standard of Dum-Dum and Sex with an X and while there’s probably nothing quite as perfect as those Cobain favourites mentioned earlier, there’s still plenty to enjoy over the course of its 33 or so minutes and nothing that remotely resembles a dud.