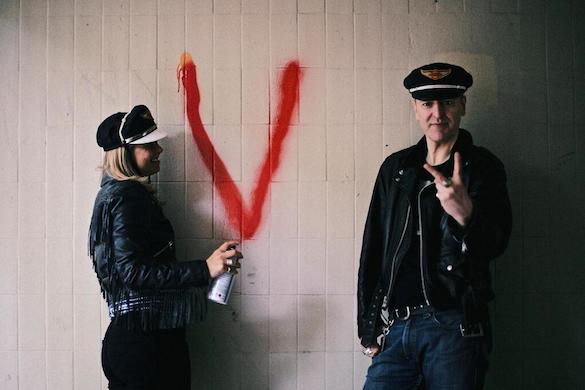 Last week The Vaselines announced details of a new album, V For Vaselines, which will be released through Rosary Music on Monday September 29th 2014. Today they’ve followed that up with news with details about a handful of dates to coincide with its release. More details about both can be found below.

V For Vaselines is a celebration of the continued chemistry of co-cosprators Eugene Kelly & Frances McKee. “We just work together well,” says Eugene. “I don’t know what it is, but when we get together, it creates a sound we couldn’t do separately.”

Recorded quickly and spontaneously, the album, was in part, inspired by Eugene chancing upon a Ramones covers band in Glasgow. “After that, I just wanted to write some really short punk rock songs, just get into people’s ear really straight away, and then get out of there really quickly.”

V For Vaselines is their third album having formed in Glasgow in 1987. Their debut, Dum Dum was released on the legendary Scottish label 53rd & 3rd in June 1989. The band broke up the same week as the album was released, but subsequent patronage by Kurt Cobain (Nirvana covered 3 Vaselines tracks), saw the bands early singles compiled by Sub Pop in 1992.

Both continued to write and record, and reunited in 2008 to play Sub Pop’s 20th anniversary festival as well as some further shows around the world. They would eventually release their second album, Sex With An X, on Sub Pop in 2010.

The track list can be found below the track One Lost Year which you can stream or download below. You can pre-order the album from The Vaselines website: thevaselines.co.uk.

Meanwhile The Vaselines have also announced details of three UK shows in the autumn.

With luck a few more will be added – watch this space. Or just use the links to the bands social media accounts below.